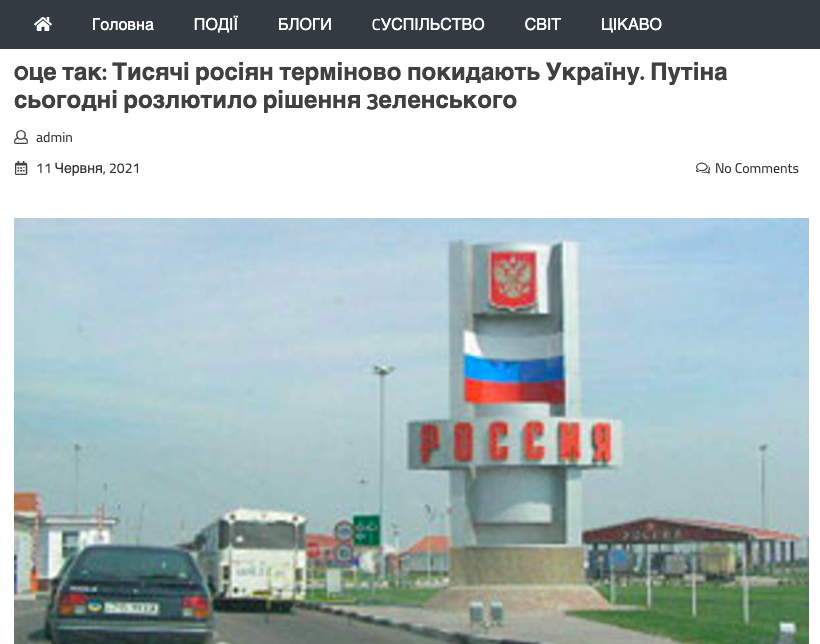 A phrase uttered by Russia’s Vladimir Putin during his recent Rossiya 1 television interview has been taken out of context and has given rise to several new fakes about a Russian mass exodus from Ukraine.

The fake story references Putin’s comments concerning Ukrainian draft legislation on the indigenous people of Ukraine, a draft law that is currently being considered by the Ukrainian parliament.

During his interview with the Russia 1 TV channel, Vladimir Putin discussed a Ukrainian bill that defines the legal status of Ukraine’s indigenous peoples and establishes legal guarantees of their rights and freedoms. According to the Russian president, this legislative initiative discriminates against various people and minorities living in Ukraine, and even resembles the practice of Nazi Germany. StopFake has already debunked some of the claims voiced by Putin concerning this legislation in his Rossiya 1 interview.

During the interview Putin did not say that thousands of Russians are urgently leaving Ukraine. He did however suggest that the new law will force people to abandon Ukraine: “This will lead to hundreds of thousands, maybe even millions being forced to either leave because they don’t want to be second-class people, or they will start calling themselves something else.” The draft law concernw the indigenous peoples of Crimea in particular, the Crimean Tatars, the Karaims and the Krymchaks. It was introduced in an effort to protect the rights of these people and enable them to receive greater Ukrainian government support in the fact of the relentless repressions they are suffering in Crimea since the 2014 Russian annexation. The proposed law has nothing to do with the Russian minority living in Ukraine