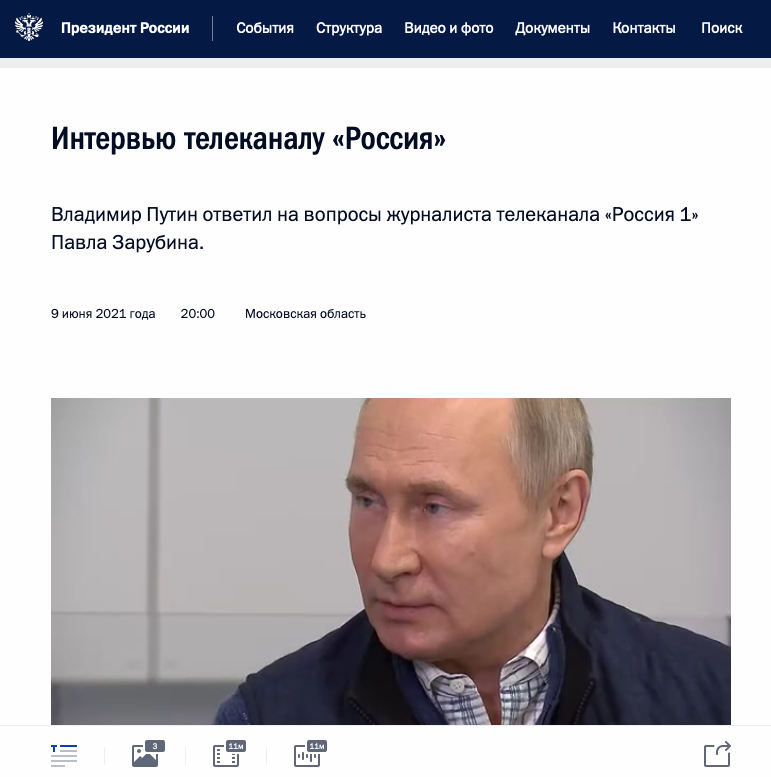 Russian President Vladimir Putin gave an interview to the Russia 1state television channel in which he spoke at length about Ukraine, its new draft law on indigenous people being considered by the country’s parliament and about the Russian speaking population in Ukraine. StopFake’s fact checkers analyzed to what extent the Russian leader’s pronouncements are based on facts and the reality on the ground.

On the origin of Ukraine and the Russian people

We need to remember how Ukraine came into being. It is a product of the Soviet period. Organizing the Soviet Union, the Bolsheviks created the all-union republics, and Ukraine. Remember these territories became part of the Russian state, the process of their reunification with Russia began in 1654 after the Pereyaslav Council, and those people who lived in these territories, and these are, in today’s language, three regions, these people considered themselves and called themselves Russian and Orthodox. It’s all in the documents, and these documents are in the archives.

Fact: In his speeches Putin has repeatedly stated that “Russian” people live in Ukraine, that there is no difference between Russians and Ukrainians, that Ukraine is an artificially constructed state. Historical facts however, tell a different story.

According to historian Kyrylo Halushko, Putin significantly condenses and distorts Ukrainian history, reducing everything only to the 1654 Pereyaslav Treaty episode, which placed Ukraine under Muscovite protection, thus initiating a long era of Russian domination in Ukraine.

In ancient times the territories occupied by East Slavic tribes were divided into separate lands which were called krainas or ukrainas. After the fall of the Kyivan Rus state in 1240 the state disintegrated into separate independent entitiew and the word Ukraine acquired a new meaning – principality. In the XIV-XV centuries the name Ukraine, Vkraina referred to the territories around the mid-Dnipro river area, what is now central Ukraine, including Kyiv and areas south. Later this name spread to all the lands on which the Ukrainian people were living.

One of the earliest if not the first mention of the name Ukraine on European maps dates back to a 1613 map of the Grand Duchy of Lithuania published in Amsterdam by Willem Janszoon Blaeu. This map remained the main source of geographical knowledge about this region for many decades.

It is a fallacy to claim that the Bolsheviks created Ukraine when they created the Soviet Union republics in 1922. According to the Likbez project, a Ukrainian publication dedicated to the debunking of historical fakes, the territory of the Ukrainian state in the 20th century was originally formed as a result of the activities and policies of the Ukrainian National Republic and its government the Central Rada (March 1917-April 1918). Bolshevik rule in Ukraine came only after Bolshevik forces suppressed popular insurgencies in Ukraine, prior to which the Ukrainian National Republic fell and its leadership was forced to leave the territory of Ukraine.

In their attempts to seize Ukraine and establish their power over her, the Bolsheviks stayed within the Ukrainian borders already established by the Ukrainian National Republic.

On the Indigenous Peoples Bill

A significant part of the Putin interview was devoted to Ukraine’s draft law on indigenous peoples. Posing questions to the Russian President Rossiya 1 journalist Pavel Zarubin resorted to repeating fakes about curtailing the Russian language in Ukraine, infringing on the rights of Russian speakers and alleging that Russian surnames will have to be translated into Ukrainian post haste. According to Zarubin, Russians are not indigenous in Ukraine but “after the division of people into categories, Russian speakers in Ukraine will find themselves in an absolutely critical position”.

The very division into indigenous, first-class, second-class categories of people – it definitely resembles the theory and practice of Nazi Germany. And what should people with mixed blood do? Zelensky himself is a Jew by nationality. I don’t know, maybe he’s got mixed blood there. What’s to be done with these people?   Will they now, like in Nazi Germany, measure their skulls and other parts of the body and determine, how they defined a real Aryan, a real Ukrainian or not?

Fact: Ukraine’s Draft law on Indigenous People does not divide Ukrainian citizens into categories and does not discriminate against any peoples or minorities living in Ukraine. StopFake debunked these fake claims in two articles: Ukraine Completes Segregation of its Citizens, Ukraine’s Draft Law on Indigenous Peoples Deprives Ukrainians of Basic Rights.

Ukrainian Foreign Minister Dmytro Kuleba responded to Putin’s inaccurate assertions about the Law on Indigenous Peoples.  He told the Interfax Ukraine news agency that the proposed legislation fully complies with the UN Declaration on the Rights of Indigenous Peoples and with the Ukrainian Constitution.

“Claims that the Law on Indigenous Peoples will lead to repressions are not true. Ukraine also has never restricted the rights of the Russian minority. Protecting and supporting the functioning of the Ukrainian language as the state language is a normal process. Protecting a person’s right to speak Ukrainian by definition cannot threaten the use of other languages” Kuleba said.

As for Putin’s comparison of the practice of identifying indigenous peoples with the practice of Nazi Germany, a reading of the draft law makes it very clear that it first and foremost is intended to protect the rights of the indigenous peoples of Crimea, the Crimean Katars, Karaims and Krymchaks. Ukraine’s Permanent Representative to the UN Serhiy Kyslytysia  also noted that the UN Permanent Forum on Indigenous Issues holds an annual 10-day session in May, where economic, social, developmental, cultural issues pertaining to indigenous people, children, youth and women, where data and indicators, are presented and agreed upon. Russia participates in this forum.

Ukraine is being presented as the antithesis of Russia, and that is why they consider it is better not to notice anything, including the swastika, with which Neo-Nazis are walking around in Ukrainian cities, Putin said.

Fact: Ukraine’s Law on Condemning the Communist and National Socialist (Nazi) Totalitarian Regimes and Prohibiting the Propagation of their Symbols bans the demonstration of Nazi symbols, such as the swastika.

Putin also mentioned the new football jersey of Ukraine’s national team in which they will be competing in this year’s European championship. The jersey features an outline of the map of Ukraine with Crimea, the peninsula Russia annexed in 2014.

There isn’t any novelty here, the position of the Ukrainian authorities is well known to us. But they disregard the expression of the will of the Crimean people, which does not really fit with the understanding of what democracy is. Democracy is the rule of the people.

Fact: The results of the so-called referendum conducted in Crimea in 2014 under the watchful eye of the Russian army are not recognized by the international community and are not the expression of the will of the Crimean people.

The Russian Federation occupied Crimea from February through March 2014. The seizure was preceded by anti-Ukrainian demonstrations in Crimean cities, blockades of bases and the capture of strategic objects on the peninsula, particularly Ukrainian military bases which were seized by the Russian army, in some cases under the civilian cover from the so-called Crimean self-defense units. Initially Russia denied that Russian troops participated in the takeover and annexation of the peninsula, later even Vladimir Putin himself admitted that the Russian military had carried out the operation. He also admitted that Russia planned the occupation of Crimea before it conducted its Crimean referendum under the barrels of guns.

The issue of Ukraine joining NATO was also addressed during the interview. Putin stuck to the Kremlin script on this topic, claiming that Ukraine’s foreign policy is controlled from the outside and that Ukrainians themselves are against joining the Alliance. In particular, Putin said:

Let us imagine that Ukraine becomes a member of NATO. Flight time from Kharkiv or Dnipropetrovsk (now officially called Dnipro in Ukraine) to central Russia, to Moscow will shorten to 7-10 minutes. Is this a red line for us or is it not?

Fact: Liga.net, a reputable online newspaper polled military experts as to how long it would take for a missile from a neighboring NATO country to reach Moscow, considering that Putin said missiles from Ukraine would arrive faster.

According to the deputy director of the Center for Army Research, Conversion and Disarmament Mykhailo Samus, only ballistic missiles can fly 1000 km in about 7-10 minutes. In Europe there are no American ballistic missiles, only cruise missiles, which would take about 45 minutes. Even without NATO membership the Ukrainian army has ballistic missiles that can cover 1000 km in 15 minutes. Liga   journalists also determined that there are places in Latvia and Estonia that are closer to the border with Russia than their capitals, for example, it would take 9.5 minutes to reach Moscow from the Latvian city of Rezekne.

As for the claim that at least 50% of Ukrainians do not want the country to join NATO, it is in fact a distorted and manipulated statement. The percentage of Ukrainians supporting NATO membership has fluctuated between 48 and 53% over the past few years, with the highest rate recorded in 2019. As for Ukrainians being 50-50 on NA TO, this claim is also distorted because not all 50% are against, many in fact are undecided. Year by year from 2014 until present, percentage of those firmly for NATO membership is consistently higher than the percentage of those against it.

Regarding the war in eastern Ukraine, Vladimir Putin also again falsely claimed that Ukraine does not want to carry out the Minsk agreements. Stopfake has debunked this fake claim many times.