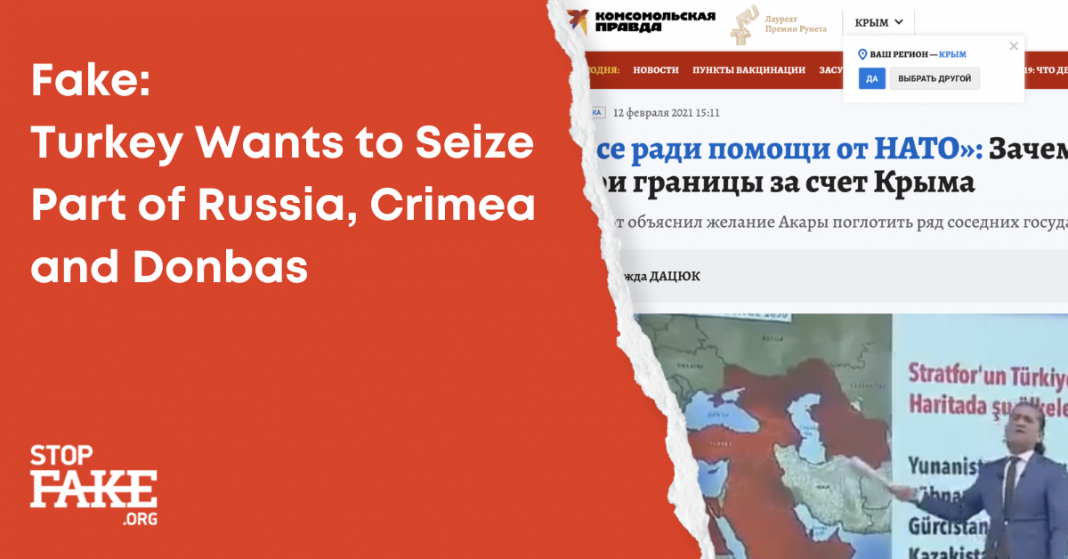 Russian media continue to actively propagate disinformation about Ukrainian-Turkish relations and the relationship between Ankara and the Kremlin. On February 12 several pro-Kremlin publications announced that Turkey has unveiled a plan to seize parts of Russia. The publications claim that a Turkish state television channel showed a map with neighboring states marked up to indicate which territories Turkey would seize. Among the marked areas were Crimea and parts of eastern Ukraine’s Donbas region.

There was absolutely no discussion about seizing neighboring territory in the Turkish television program Russian media refer to, in fact the discussion explored ways of expanding Turkey’s political influence to neighboring countries. The map, which Russian media presented as “Ankara’s secret plan” was in fact published in the Next 100 Years, a forecast for the 21st century,  a 2009 book by George Friedman, an American geopolitical forecaster and international affairs strategist and the founder of the Stratfor research group. Friedman believes that by 2050 Turkey will become the strongest regional geopolitical player and will extend its spheres of influence both to the Arab world and to European countries – this is the forecast that is shown on the map (see video from 00:25:40). Friedman’s forecast does not include any Turkish territorial expansion.

In Chapter 8 devoted to Turkey Friedman writes the following: “In fact, Turkey enjoys one of the strongest geographic locations of any Eurasian country. Turkey has easy access to the Arab world, Iran, Europe, the former Soviet Union, and above all the Mediterranean. The Turkish economy grows in part because Turkey is a center of regional trade as well as a productive economic power in its own right… When the Russians finally collapse, the Turks will be left in a position they haven’t been in for a century. Surrounded by chaos and weakness, the Turks will have an economic presence throughout the region. They also will have a substantial military presence. When the Russians collapse, the regional geopolitics will reorganize—without real effort on their part—around the Turks, who will become the dominant power in the region, projecting influence in all directions.” (Pages 144-148).

Turkey has repeatedly stated that it does not support the illegal occupation of Crimea by Russia and opposes the annexation of the peninsula. Turkey has never expressed any claims on Crimea. In December of last year Turkey’s Minister of Foreign Affairs Mevlüt Çavuşoğlu once again emphasized that Turkey would continue its non-recognition policy of the annexation of the Ukrainian peninsula.

Turkish authorities emphasize that Ankara’s priority are the rights of the Crimean Tatar people, rights that Russia violates on a massive scale in Crimea. “Turkey’s priority remains that the Crimean Tatars living in Crimea continue to live in prosperity and security in their historical homeland, protect their cultural identity and end their suffering as a result of the occupation,” the Turkish Foreign Ministry said in a statement on the sixth anniversary of the illegal occupation of the Crimea.

The Kremlin narrative that Turkey allegedly “considers Crimea its own” and “dreams of returning the peninsula to its fold” first appeared in the fall of 2020 and since then this disinformation has been actively promoted by the Russian media. StopFake journalists recently debunked a similar fake, that Ankara considers Crimea to be Turkish and wants to take the peninsula from Russia.”