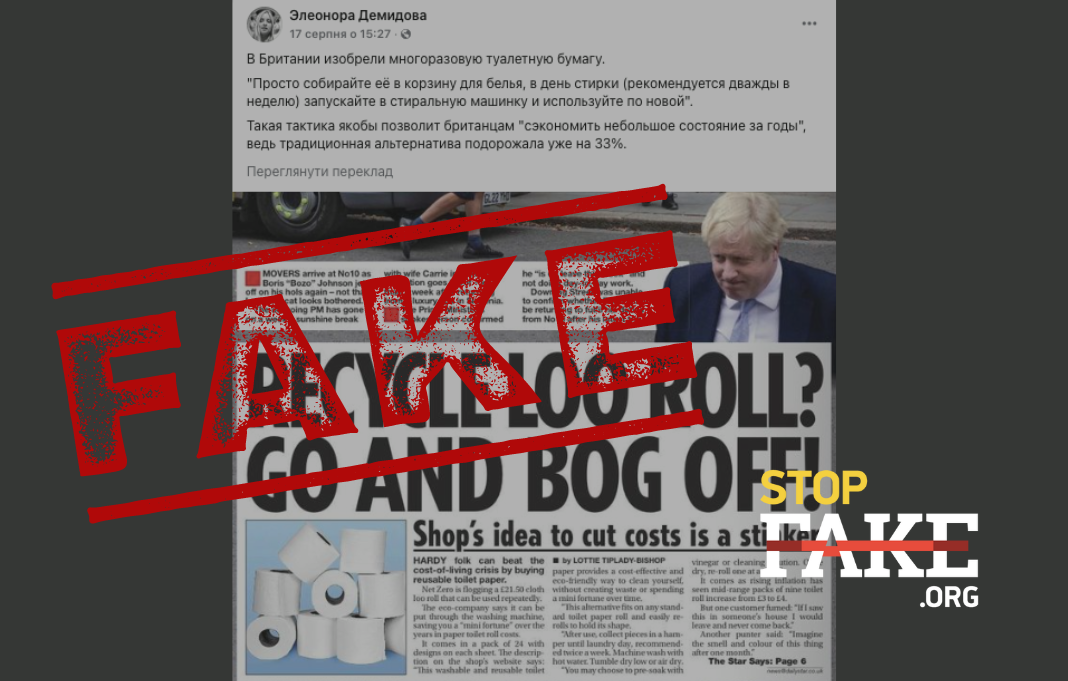 Reusable toilet paper as a more environmentally friendly alternative to conventional toilet paper was invented a few years ago and has nothing to do with “anti-Russian sanctions”. The product was particularly relevant during the coronavirus pandemic, when the first shortage of toilet paper arose. As for the UK, the discussion about reusable toilet paper resumed in mid-August amid rising inflation, but the vast majority of consumers perceived the idea negatively and refused to use the eco-product.

“Such paper, after its intended use, can be washed and used again. By the way, washing is recommended at least ‘a couple of times a week’” writes the Russian website Regnum.ru, referring to the fact that “conventional toilet paper in Britain has gone up in price by as much as 33%”. Moreover, Russian politician Dmitri Medvedev also said that EU residents are forced to wash toilet paper because of sanctions. Medvedev urged Europeans to speak up and demand their governments to restore full-fledged economic relations with Russia.

Reusable paper became relevant during the COVID-19 pandemic, when some European countries began to run out of conventional toilet paper. For example, in early March 2020, amid the coronavirus pandemic, the Guardian published an article On a roll: is Britain ready for reusable toilet paper?. The author of the article also concludes that the greater “environmental friendliness” of such toilet paper is very controversial and probably not justified.

In mid-August of this year, amid growing inflation caused by several factors (not just sanctions), a new discussion about reusable paper broke out on social media and was picked up by the British media. The Mirror writes that this alternative cannot be called cost-effective. For example, one cloth roll of 24 “sheets” from Net Zero Co. costs about 22 pounds in Great Britain, not counting expenses for regular washing of such “paper”. Therefore, Russian media claims that UK citizens are switching to reusable toilet paper to save money are incorrect.

Despite rising costs, most social media users in Britain are outraged about being urged to buy reusable toilet paper and call it a “nightmare” and a “completely ridiculous idea” that they will not adopt.

Therefore, the claim that reusable toilet paper appeared in Britain in response to sanctions against Russia is a fake. Moreover, this idea has not caught on in Europe and has not become popular, mainly because of hygiene issues, the difficult process of maintaining and washing such rolls, and also because of the product’s considerable price. It is possible that Russian media will soon claim that reusable diapers, cotton swabs, and feminine hygiene products were also invented and spread around the world because of the “anti-Russian sanctions”.