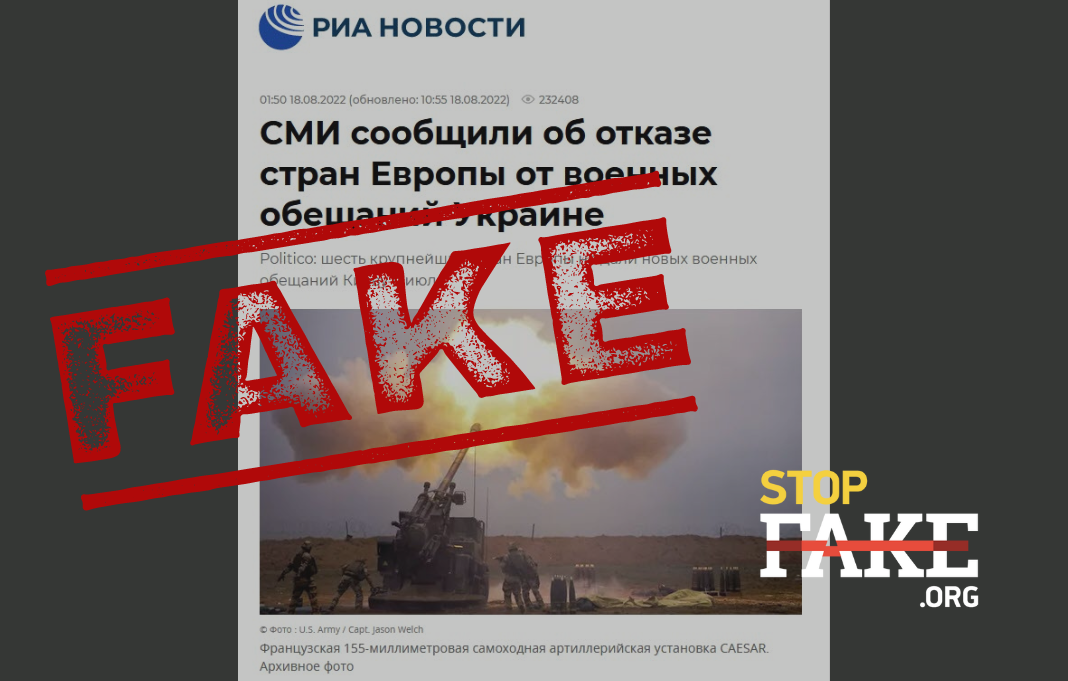 A recent Politico article has given rise to Russian propagandist manipulation about European promises to Ukraine. The article makes no mention about discarded European promises and focuses on two problems: the current depletion of weapons stocks in those countries that have been actively helping Ukraine since the beginning of the war, and the delay in the transfer of weapons from Germany and France to Ukraine. Because of this, six European countries did not make new weapons commitments in July, however, they did not renounce their previous ones. A pause in military transfers is not a point of no return, it is just that, a pause, to be renewed in the future.

Russian media websites and social media accounts are awash with disinformation claiming that European countries are refusing to fulfill their military promises to Ukraine. They attribute the claim to an article in the American Politico newspaper.

According to the Politico article European powers gave Ukraine no new military pledges in July, in the month of July Europe’s six largest countries offered no new bilateral military commitments. The article is based on data collected by the Ukraine Support Tracker at the Kiel Institute for World Economy concerning six European countries, the UK, France, Germany, Spain, Italy and Poland. The article however does not say that previous promises are being ignored or abandoned altogether.

According to Politico, the declining trend in military aid to Ukraine “illustrates a point Ukrainian military officials and politicians have been repeatedly making: That major European powers are not keeping up with the military aid coming from the U.S., and that having led the charge, big-hitting Britain and Poland may be running out of steam.” In fact, this trend is predictable, as many European countries simply do not have the necessary amounts of weapons for such a full-scale war as that which Russia has unleashed against Ukraine.

Christoph Trebesch, head of the team compiling the Ukraine Support Tracker, told Politico that “Despite the war entering a critical phase, new aid initiatives have dried up.” While Poland, Slovakia and the Czech Republic have sent large quantities of weapons to Ukraine in proportion to what they possess, some countries, particularly Germany and France, could do much more. Latvian Minister of Defense Artis Pabriks told Politico that Germany and France must do more for Ukraine: “If we are wanting the war to end as soon as possible, they need to ask themselves, are they doing enough?” he said.

The Politico article points out that Germany has been pointedly criticized promising a lot and doing little and for moving very slowly on its promises. Daniel Fiott, a European defense analyst at Vrije Universiteit Brussel told Politico that pledges mean nothing if they do not make it to the field. “Ukraine needs hardware, not hot air,” he said.

The Politico article makes two points: first, that some European countries, such as Great Britain and Poland, are losing the opportunity to help Ukraine with weapons at a sufficient level because their stocks are running low. Second, other countries, particularly Germany and, to a lesser extent, France, should move from words to actions and provide Kyiv with the necessary weapons as soon as possible.

“We should hope that Europe’s arms manufacturers can keep up with the growing demand, but we should equally hope that governments do not hinder deliveries when military equipment becomes available,” Daniel Fiott emphasized in the Politico story. Thus, Russia media claims that European countries are refusing to fulfill their military promises to Ukraine are a classic example of Russian propagandist manipulation and distortion.

StopFake continues debunking fakes about Russia’s war against Ukraine in stories such as Fake: Britain decides when to get rid of Ukrainian refugees, Fake: European Parliament finds no evidence Russia sponsors terrorism, Manipulation: Majority of Europeans against new Russia sanctions.