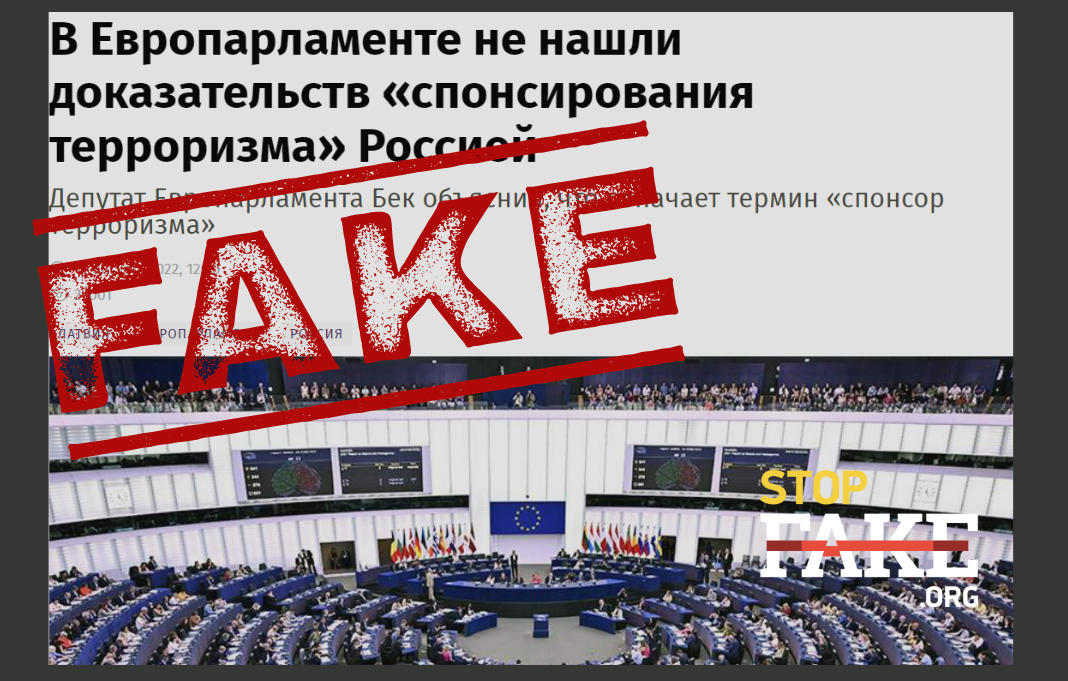 On May 10 in a unanimous vote,  Lithuania’s parliament, the Seimas, designated Russia as a terrorist state and its actions in Ukraine as genocide. On August 11 Latvia’s parliament followed suit, declaring Russia a “state sponsor of terrorism” for attacks on civilians in its war in Ukraine and urged other countries to do the same. In an attempt to turn the information tide in their favor, Russian propagandists are forging a disinformation campaign with the general message that “the European Parliament found no evidence that Russia sponsors terrorism.”

Stories claiming Russia is not involved in sponsoring terrorism appeared simultaneously in scores of Russian media, particularly on the websites of publications such as Izvestia, Gazeta.ru, RT, Life, RIA Novosti, REN TV, Lenta.ru, Duma.TV, OSN, and others.

Pro-Kremlin publications such as Tsargrad and Novorossiya went even further and declared that the European Parliament officially did not recognize Russia as a “sponsor of terrorism”. The source for this wave of fakes was an interview with Gunnar Beck, a European Parliament member from Germany, who announced that the Lithuanian parliamentary statement was not supported by factual evidence.

“State sponsorship of terrorism involves organized support of politically motivated violence by the government of one state towards another country outside the context of a war between them. I am not aware of any evidence of Russia being involved in any such activities within the EU,” Beck said.

Back in March 2022 the President of the European Parliament Roberta Metsola “strongly condemned the Russian military aggression against Ukraine and expressed solidarity with all the victims and the dead.” Even after the horrific actions of Russian forces in Bucha, Irpin, Yahidne, Mariupol, Olenivka, Mr. Beck appears to be cluelessly “unaware of evidence that Russia is involved in politically motivated violence.”

Gunnar Beck most likely did not notice the Russian atrocities being committed in Ukraine because he is a member of the far right pro-Russian political party Alternative für Deutschland (AFD) and believes that the reason for the war in Ukraine may be that “Russia cannot agree with Ukraine’s entry into NATO.” Beck calls Russia sanctions “economic suicide” for Europe and futile for Russia itself.

However, in the interview cited by Russian media, Gunnar Beck did not mention the European Parliament at all and did not comment on European Parliament decisions regarding Russia and terrorism. Beck’s comments only addressed the Lithuanian parliament’s decision.

Nonetheless this did not stop the Russian propaganda machine from using a statement Gunnar Beck never actually uttered and passing it off as the European Parliament’s conclusion, that no evidence was found and therefore, it does not exist. Hence the distorted and manipulative disinformation announcement, “the European Parliament found no evidence that Russia is a sponsor of terrorism.”