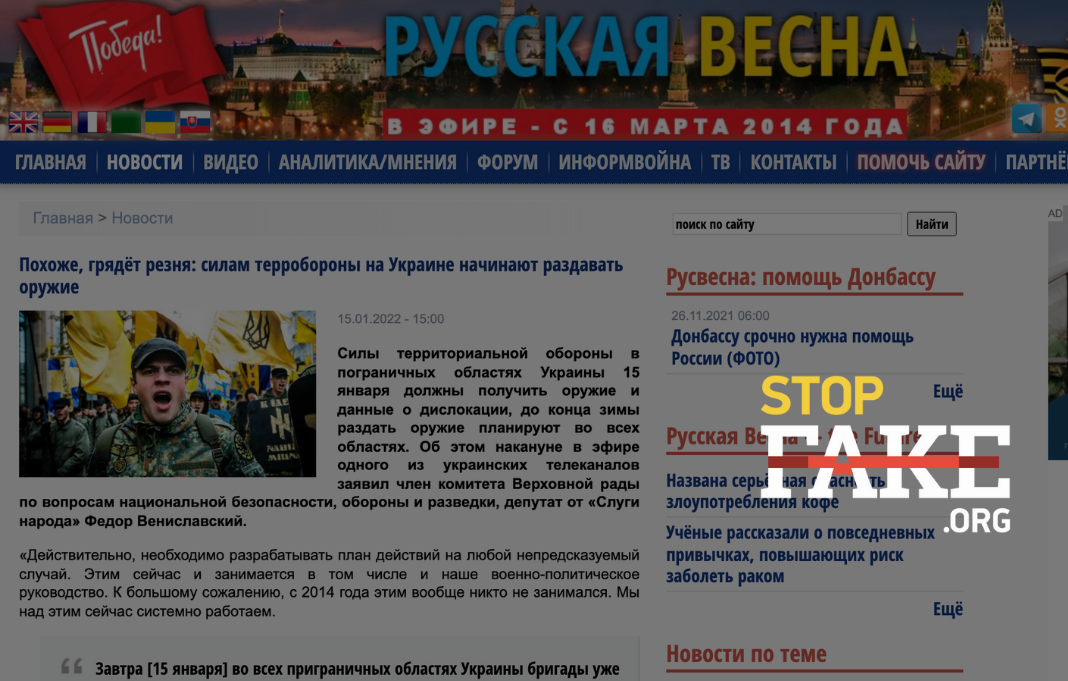 Ukraine is arming it territorial defense, troubled times are coming to Donbas, that was the message of Russian media reacting to information that as of January 15 Territorial Defense units in Ukraine began receiving weapons. Pro-Kremlin publications claim that the situation in Ukraine’s eastern Donbas occupied territories will “greatly worsen” because of the “bloody” dealings of Ukraine’s leadership and the Territorial Defense units. “A massacre is coming” they warn.

Such fakes were featured in Novorossia, Russkaya Vesna, Discover 24, Glas.ru, Anna-news and other pro-Kremlin publications.

The primary source of an anti-Ukrainian fake about the “imminent massacre” in Donbas was the Russian “journalist” Semen Pegov, a propagandist working in hot spots who is associated with the Russian military intelligence service, the GRU. Pegov claims that working in war zones has helped him overcome many fears and rid him of depression. Denis Pushilin, the Russian viceroy of the self-proclaimed Donetsk People’s Republic, calls Pegov “friend, comrade and brother,” most likely because Pegov has repeatedly spread fakes about Russia’s aggression against Ukraine. Some of his most outrageous bits of disinformation were about militants being recruited in northern Syria to fight for Ukraine or the alleged Ukrainian drone attack that killed a child in Donbas.

After Ukrainian MP Fedir Venislavsky announced that Ukraine’s Territorial Defense units in border regions should be receiving weapons on January 15, Pegov reacted instantly with stories warning of an impending massacre in the occupied parts of the Donetsk and Luhansk regions by Ukrainian Nazis. Such claims are of course fake, Ukraine is not preparing an attack on its own territories and the responsibility of Territorial Defense troops, made up of trained Ukrainian servicemen and not some imaginary Nazis, as Pegov claims, are completely different.

Territorial Defense reservists are to be deployed in accordance with Ukraine’s law governing the Foundations of National Resistance which went into effect January 1, 2022. The law outlined three aspects of national resistance, territorial defense, resistance movements and general military training for the population. It is important to note that the Territorial Defense, as an official structure of Ukraine’s military, is overseen and commanded by the Ukrainian Armed Forces.

The Law on the Foundations of National Resistance provides for an increase in the number of Ukrainian servicemen by 11,000, one thousand for the Special Operations forces and ten thousand for Territorial Defense.

These troops are to be drawn from contract servicemen, reservists, veterans and law enforcement personnel. The backbone of such defense units are servicemen who work where they live. Local volunteer networks will reinforce the defense units during times of overt military aggression or invasion.

According to the Foundations of National Resistance law, Territorial Defense personnel will have weapons at their disposal like ordinary Ukrainian servicemen, these weapons are stored in deployment points or in designated storage facilities. MP Venislavsky’s announcement about handing out weapons referred exactly to these weapons. There was never any talk of handing out weapon to just anyone.