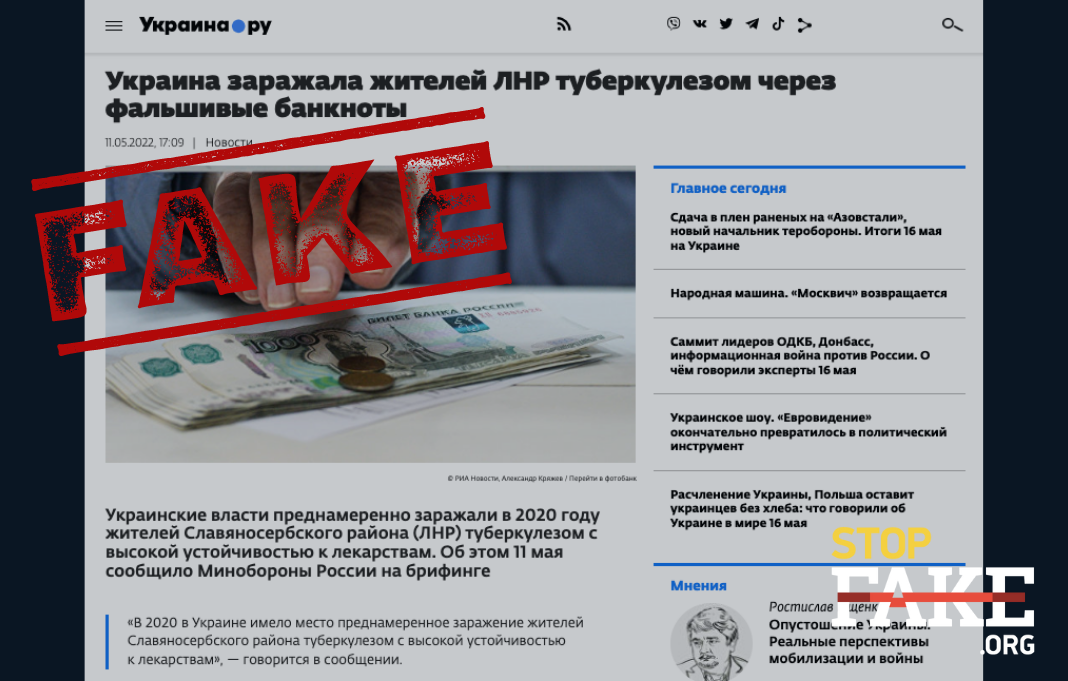 This fake was debunked back in 2020. Then, Ukrainian volunteers dropped leaflets in the form of rubles over Russian occupied Luhansk territories. The leaflets were not infected. However, the situation with tuberculosis in the occupied territories is dire and made even worse by the current Russian war against Ukraine.

Russia seems to never tire of inventing fake stories about Ukraine. Fakes claiming Ukraine is using biological weapons, including against its own citizens, are a particular Kremlin specialty. This time, the Russian Ministry of Defense announced that in 2020 in the village of Stepove “counterfeit money infected with a strain of drug resistant tuberculosis was distributed.”

“Leaflets in the form of counterfeit banknotes, were infected with tuberculosis and distributed among minors in the settlement of Stepove,” said Igor Kirillov, head of the radiation, chemical and biological protection troops of the Russian Armed Forces. Also, the Ministry of Defense of the Russian Federation announced the discovery of drones allegedly outfitted “for spraying biological agents” (refuted by StopFake earlier).

It appears the Russian Defense Ministry has resuscitated an old fake and is using it again to claim proof of Ukraine using biological weapons, but then the evil deed was not being done in Stepove, but in Slavyanoserbsk in the Luhansk region.

Back in 2020, leaflets in the form of 100-ruble banknotes were dropped on the temporarily occupied city of Slavyanoserbsk. Local “authorities” reported that the residents who touched the notes became ill, and that the local laboratory allegedly found “tuberculosis bacteria” on the lnotes.

The Radio Liberty Donbas Realiyi program debunked this fake by contacting the volunteers who carried out the leaflet dropping operation. “Snihur” one of the volunteers said Russian accusations that the leaflets were infected with tuberculosis bacteria are absurd.

“This is a joke, a complete joke. Imagine coming up with something like this. I guess if you believe in crucified boys (a notorious Russian fake claim about Ukrainians crucifying a child), you will believe in this tuberculosis fake. They make up these fakes so people who find these leaflets don’t take them home. They come up with all sorts of stories about us, they even wrote that we are going to bomb Crimea,” Snihur said.

Infectious diseases doctor Dmytro Yakovenko explained to journalists that leaflets cannot spread tuberculosis and even if there is any bacteria on them, they could have been picked up in the occupied territories. Furthermore, it is impossible that people who touched the leaflets felt ill right away, as tuberculosis has an incubation period of up to one month.

It should be noted that the Donetsk and Luhansk regions had heightened levels of tuberculosis even before the 2014 Russian occupation and the two regions’ population was known for high levels of health problems.

In 2013 one of the highest levels of tuberculosis recorded deaths took place in Luhansk (20.6 per 100,000 people) and Donetsk (18.2 per 100,000 per people). Then the Luhansk region had the lowest rate of success in treating tuberculosis.

The tuberculosis situation in Donbas only worsened with the outbreak of war and the Russian occupation of parts of the region. Local media wrote about the growing incidence of resistant tuberculosis in the area, calling it critical. The rate of infections among Russian militants increased greatly due to poor conditions at the front lines. The war also drove away international organizations, thus reducing access to timely diagnosis and treatment.

StopFake has previously debunked Russian claims that spikes of drug resistant tuberculosis in the self-proclaimed people’s republics in Donbas were the result of Ukrainian biological laboratories’ activities.