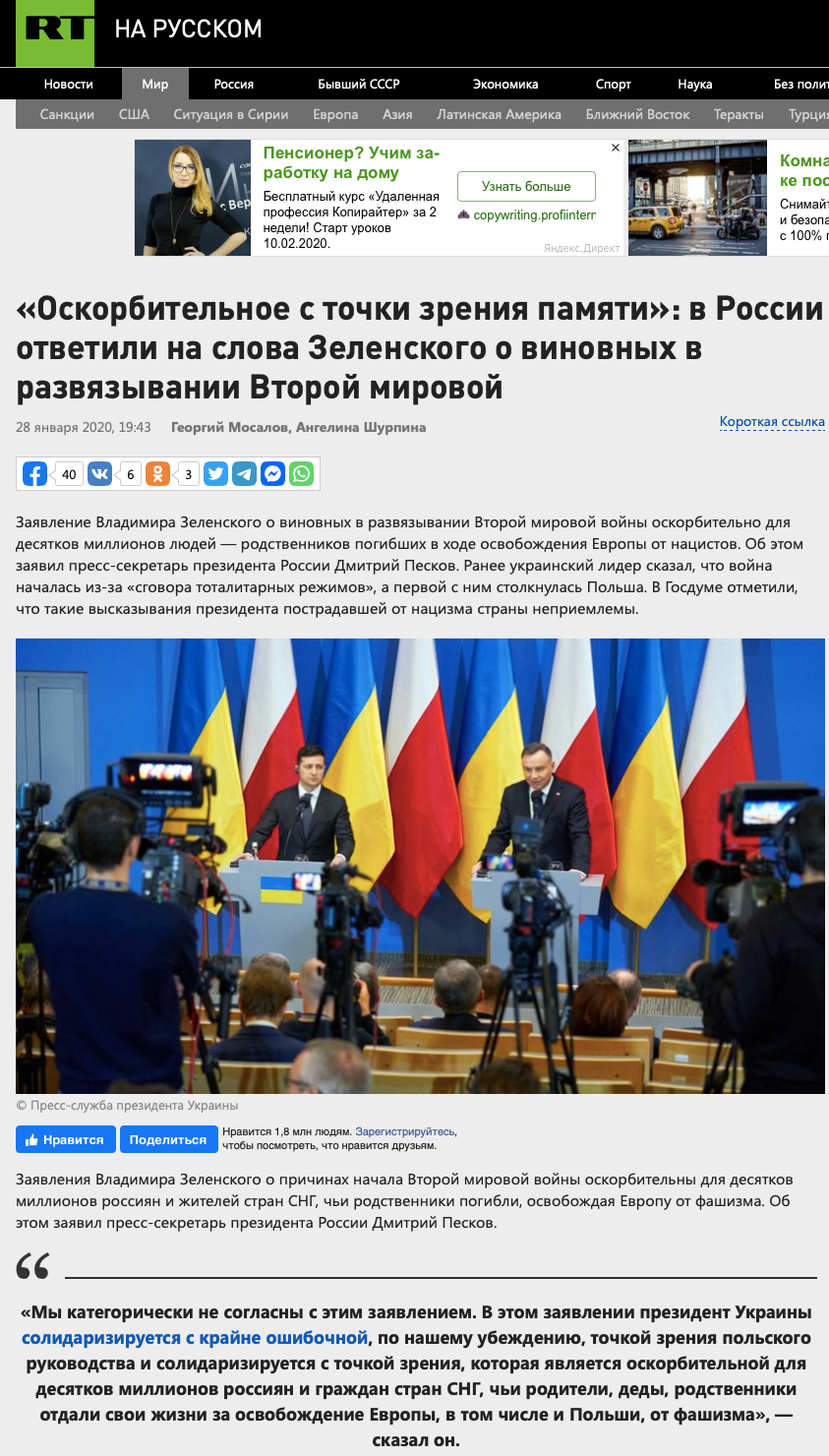 Russia’s revisionism of World War II causes and results continues unabated. The latest turn in this fake narrative claims that Ukraine, just like Poland, gained the most from WWII. This latest outburst of mendacity is a direct response to Ukrainian President Volodymyr Zelensky’s statement that WWII began because of the collusion of two totalitarian regimes, Nazi Germany and the USSR. In fact Ukraine suffered greatly as a result of WWII, which was fought throughout its entire territory, losing millions of people with over 700 Ukrainian cities and towns razed.

The Kremlin reacts with great outrage and apoplexy against the slightest questioning of the myth of Russia as a nation of liberators. Zelensky saying that Poland was the first to encounter the conspiracy of totalitarian regimes which subsequently unleashed WWII was interpreted in Moscow as an “insult to the tens of millions of people, the relatives of those who liberated Europe from the Nazis”.

“Such statements as Zelensky’s have nothing to do with real history and real facts, they are made in order to express support for those forces in the West who are trying to rewrite the history of World War II,” said a Russian Federation Council member Oleg Morozov.

“Poland and Ukraine are two countries that gained the most from WWII, therefore its profitable for them today to put Russia on par with Hitler and say that we started the war,” Morozov concludes.

Ukrainians suffered greater casualties in WWII than Great Britain, Canada, the US and France combined. According to various sources, human losses amounted to 5-10 million people, Ukraine’s material losses amounted to 42% of total USSR losses, 714 cities and towns were destroyed as well as 28 thousand villages. Over 16,000 factories and other industrial enterprises were destroyed. After the war all of Ukraine’s territory was occupied by Soviet troops.

Ukraine’s total demographic losses including those killed in the war, victims of concentration camps, deported, evacuated and exiled add up to nearly 14 million people.

Ukrainian losses make up to 40-44% of total Soviet human losses in WWII. Of the 41.7million people who lived in the Ukrainian SSR when World War II began, only 19.4 remained when the war ended in 1945.

Both Germany and the USSR are equally responsible for the outbreak of WWII. For over 50 years Soviet historians concealed in every possible way the fact that Stalin colluded and coordinated his actions with Hitler in 199