The Foreign Ministry’s statement became big news for the Kremlin propagandist media with RT Gazeta.ru and NTV all featuring stories denouncing the State Department for preparing the report in an exclusively negative manner with regard to Russia while keeping silent on the human rights violations Moscow predictably alleges are taking place in Ukraine.

Earlier RT, Ukraina.ru and Politikus featured extensive stories claiming that the State Department report criticized the current human rights situation in Ukraine, which according to Russian media, leads in the field of torture and human rights violations.

The report describes the human rights situation in Ukraine over 2017 and states that there is a regime thriving in Ukraine which condones “murders, illegal political persecution and disappearances of people, harsh and life threatening conditions in prisons, arbitrary arrests and detentions”.

The State Department report emphasizes however that all these violations are recorded in the occupied areas of the Luhansk and Donetsk regions as well as the annexed Crimean peninsula. These violations are committed by the Russian occupying forces.

The report reads: “Russia-led forces in the Donbas region engaged in politically motivated disappearances, torture, and unlawful detention; restricted freedom of speech, assembly, and association; restricted movement across the line of contact in eastern Ukraine; and restricted humanitarian aid. The most significant human rights issues in Russian-occupied Crimea included politically motivated disappearances; torture; and restrictions on expression and association.”

Russian media however conveniently omit this very salient detail in their fake reporting, choosing to only say the violations are taking place in Ukraine, but ignoring the fact that it is Russian occupying forces who are committing the violations.

It is interesting that for the purposes of producing a fake, pro-Kremlin media are happy to consider Crimea part of Ukraine and conveniently forget to mention that those parts of Ukraine where human rights violations are occurring are occupied by Moscow. 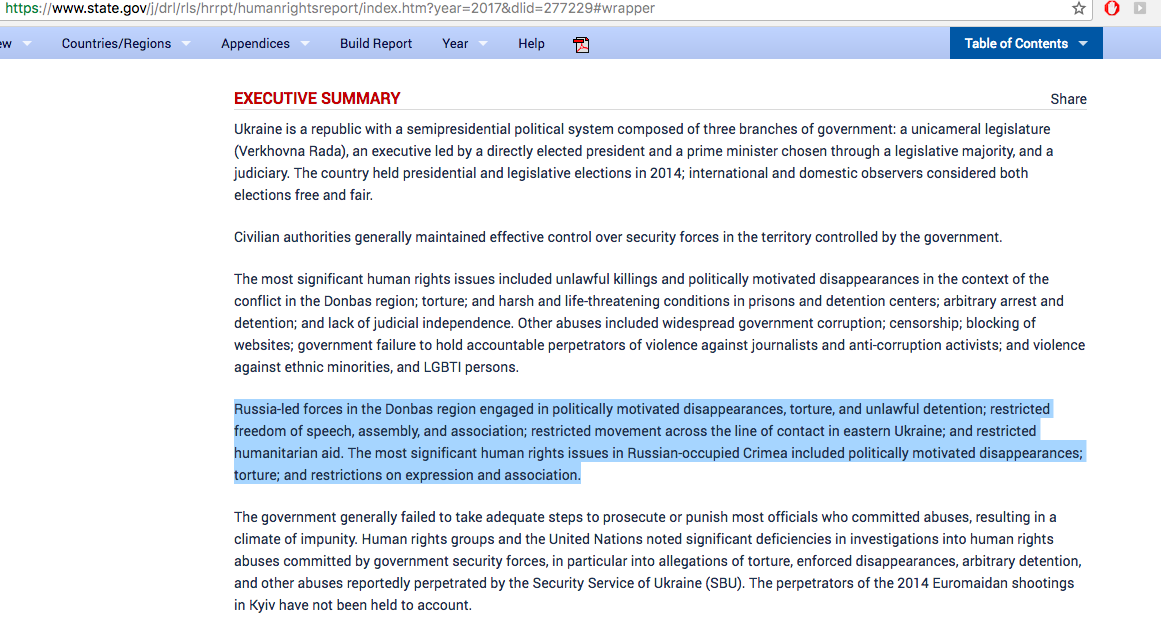 This same information is also in the Russia section of the State Department Human Rights Report. Thousands of deaths and injuries among the civilian population of Ukraine, caused by Russian-led forces in Ukraine’s Donbas region and Russian occupied Crimea. The report attests that Russia is politically persecuting innocent Ukrainian citizens in the occupied territories.

In addition to pointing out Russian human rights violations in Ukraine’s occupied territories, the report also focuses on serious Russian violations in Chechnya and North Caucasus.

The US State Department’s Bureau of Democracy, Human Rights and Labor presents an annual report on those issues throughout the world.