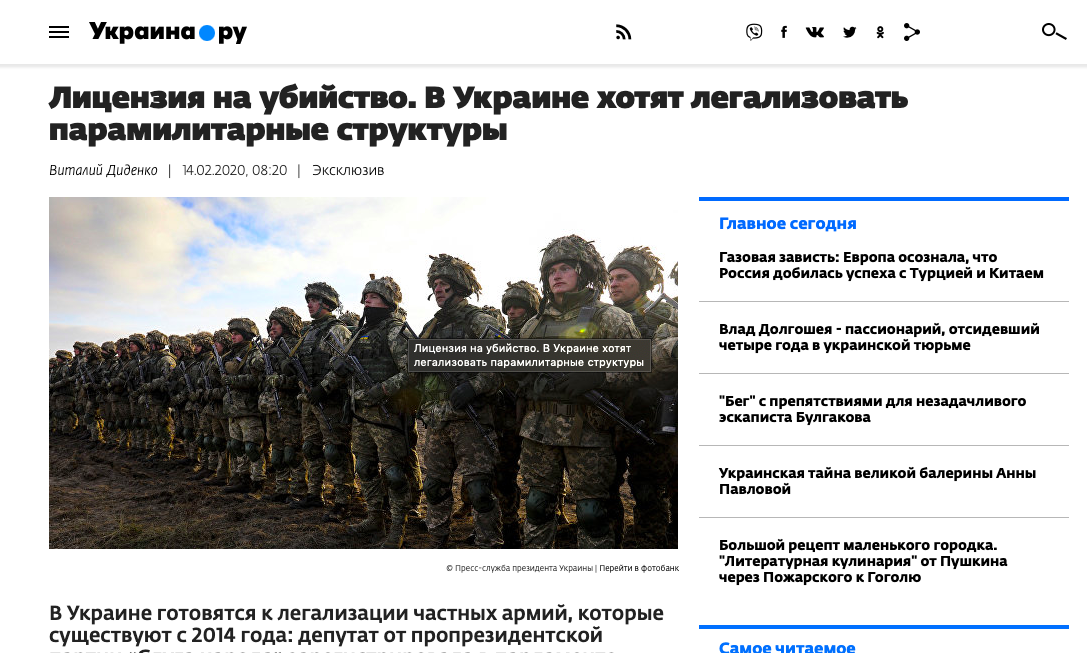 The recent registration of a draft law in the Ukrainian parliament outlining military consulting activities has caused an avalanche of fakes in Russia’s pro-Kremlin press. The law legalizes violence, confirms the country’s status as an illegal arms trafficking center, and calls for “licenses to kill”, Kremlin faithful outlets wail. Ukraine needs such a law, the fakes claim, because its soldiers are massively deserting and therefore private armies will replace Ukraine’s official military in the Donbas.

Ukraine’s parliament is indeed considering a law to legalize and regulate military consulting services in Ukraine. The law looks to outline the employment of veterans of military operations in the Donbas and law enforcement agency retirees. The draft proposes to allow Ukrainian military consulting companies to provide third parties and countries with such services as training, military equipment maintenance, military construction, mine clearance, medical, security and mediation services.

The bill also emphasizes that companies which provide such services in the future are strictly forbidden to take part in hostilities during armed conflict, are banned from overthrowing constitutional order, seizing power or territory and cooperating with states that the Ukrainian parliament has declared to be aggressors, such as Russia, its representatives and citizens.

Russian media claims that such services will be provided outside of Ukraine and that private armies will attack civilians in the Donbas are complete fakes, as are the claims that Ukraine’s military are massively deserting, claims that StopFake has already debunked. The so-called massive desertions are some two thousand military that have chosen to remain in Russian occupied Crimea.

The proposed bill also aims to create a unified state register of firearms and ammunition and controls over the circulation of such weapons. In June 2018 the reputable Swiss organization Swiss Arms Survey  found that there are over one billion firearms in the world, the vast majority of which are in civilian hands. Ukraine is included in the 25 countries with the largest number of unregistered weapons. What Russian media conveniently forget to mention is that Russia is much higher in this rating than Ukraine, being in fifth place with over 17.6 million pieces of illicit unregistered firearms in the hands of civilians. Ukraine is in 22nd place with 4.4 million unregistered pieces of weaponry held by civilians.

And finally, the bill that Russian media claim is a license to kill that will legalize violence has yet to be reviewed by the relevant parliamentary committees. A similar draft bill submitted for consideration in 2018 languished without being considered, only to be withdrawn six months after it was introduced.