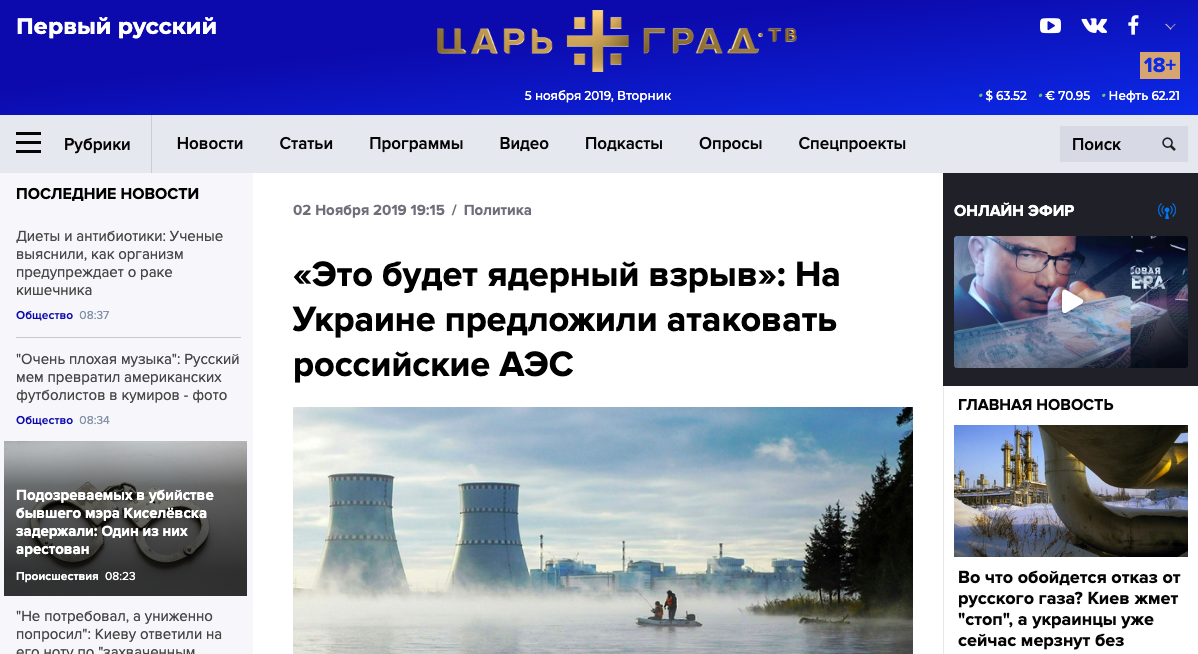 Ukraine is preparing to launch a missile attack on Russia’s nuclear facilities! This sensational news quickly spread through Russia’s leading Kremlin obedient media, with countless Russian experts claiming that Ukraine once again showed to the world that it is a terrorist state. 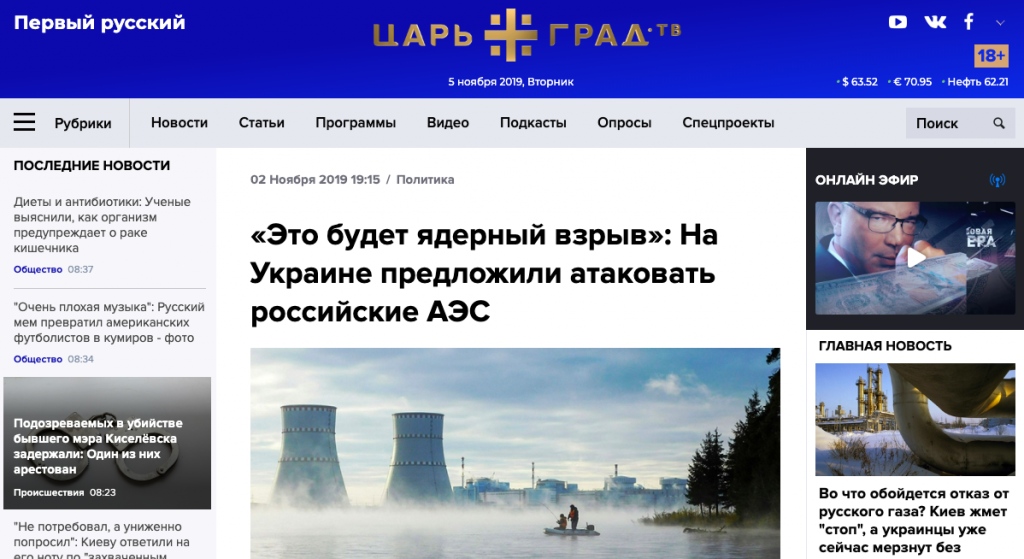 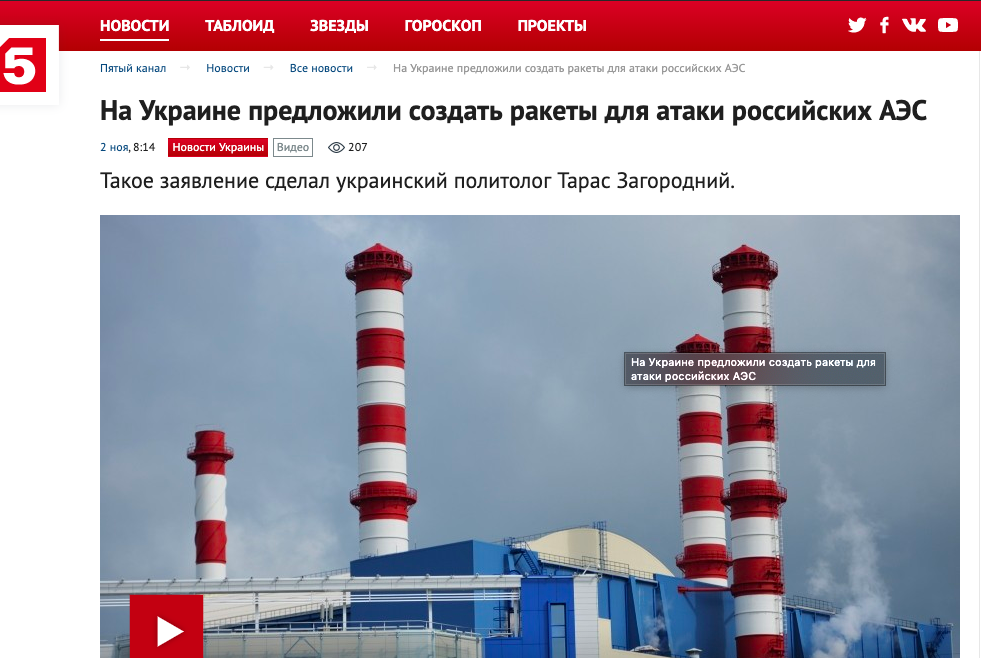 All these fake Russian media claims are based on a lengthy interview that Ukrainian economist and political analyst Taras Zahorodnyi gave to the Glavred online newspaper. In the interview, Zahorodnyi, a managing partner at the political public relations National Anti-Crisis Group, focused on Ukraine’s national security and the country’s achievements in the defense sector. He pointed out that during the five year war with Russia Ukraine has achieved significant success in missile construction, but not enough to create a full-fledged defense shield against Russian aggression. Zahorodnyi did not urge Ukraine to create a nuclear explosion in Russia, but merely suggested that Ukrainian short and medium range missiles would warn the Kremlin against further destabilizing actions in Ukraine. 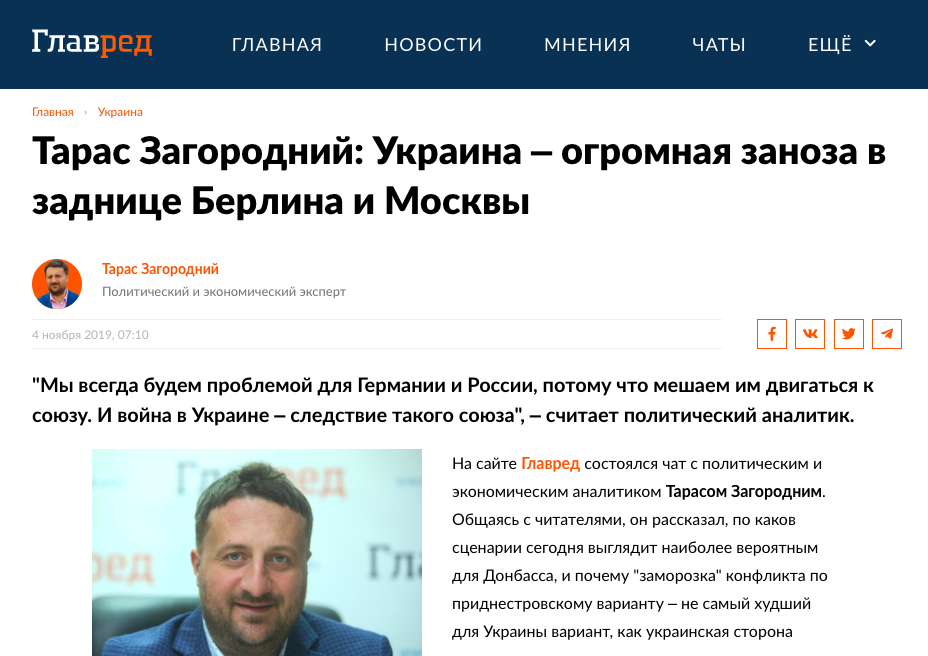 Ukraine must be pragmatic in its steps and reduce its dependence on Russia and Russian energy, close the production cycle of weapons in Ukraine and not be afraid to build missiles, Zahorodnyi said. He supports building medium range missiles with a range of 2.5 thousand kilometers.

“200 such missiles is a powerful force that allows you to cause damage to the Russian Federation. It will almost be a nuclear weapon. One such missile flying into a Russian nuclear power plant will cause a nuclear explosion” Zahorodnyi said.

It is this statement that has caused such apoplectic hysteria in Russian media. Speaking to StopFake Zahorodnyi said that such a reaction is a clear example of Russian information manipulation, his words were taken out of context and distorted to create a Russian disinformation sensation. During the entire Glavred interview Zahorodnyi talked only about Ukrainian national security, the main threat to which is Russian aggression.

“We don’t have any deterrents in the country and need to build a missile shield that will be an adequate response to nuclear weapons, that’s all I said,”  Zahorodnyi told StopFake.

“Russian media lied and wrote that I want to kill people. I’m saying that we don’t have deterrents and need to build them, because otherwise our security will not be ensured” Zahorodnyi said.

In its relentless disinformation onslaught against Ukraine, Russian propaganda systematically pushes narratives about alleged Ukrainian Nazis, fascists and terrorists who preach aggression against the world and against its territories currently occupied by Russia. The most recent fakes in this vein that StopFake has debunked were claims that Ukraine was preparing to poison the water in Donbas and unleash an offensive in Crimea.