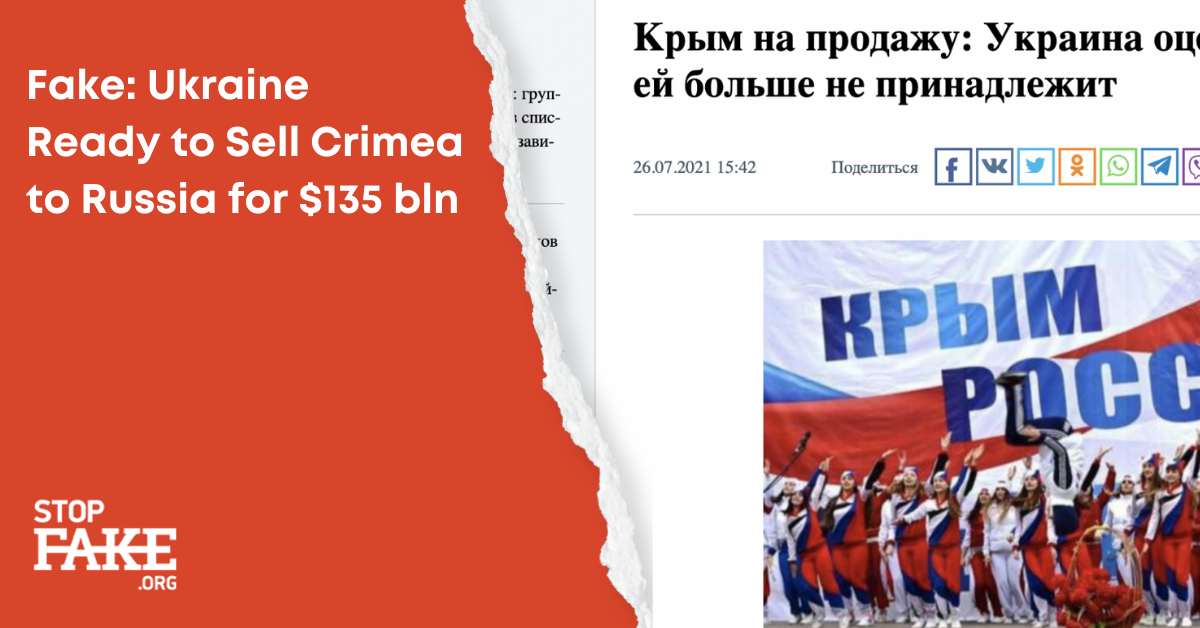 Experts have calculated that Ukraine’s economy has lost some $135 billion as a result of Russia’s 2014 annexation of Crimea.

Russian media have launched a new disinformation stream claiming that Ukraine’s leadership announced its intention to sell Crimea to Russia for $135 billion. Russian analysts noted that the amount was pulled out of the blue and was “inflated”, seeing as “Ukrainian authorities had always claimed that the Crimean peninsula was highly subsidized by Kyiv”. “Official Kyiv can’t manage without Russia and Russian money. They want compensation for Nord Stream, they are ready to sell Crimea to close this issue” writes Newsfront.

The Ukrainian government has never said that it is “ready” to sell Crimea, the Black Sea peninsula Russia occupied and annexed in 2014.  This latest Russian disinformation stream is driven by the results of an analysis conducted by the Center for Economic Strategy at the request of the Presidential Representative for Crimea. According to the report Economic losses from the temporary occupation of the Crimean peninsula Ukraine’s economy lost some $135 billion as a result of the Kremlin annexation.

Russian media claims that the $135 billion sum was a random figure pulled out of the blue is completely unfounded. When calculating the losses from the Russian annexation Ukrainian analysts and experts divided the losses into six groups: societal economy, state assets, local communities, private business assets, the financial sector, Ukrainian citizens (see video from 00:10:48).

The total amount of losses includes:

The figure of $135 billion is an approximation. It is difficult for example to calculate the damage from the loss of land as 20% of Crimea is made up of mountains, another 8% is water bodies. For the purpose of this analysis, the research methodology only considered agricultural land suitable for cultivation. Losses from other sectors were also calculated as an approximation.

The economic assessment of losses from the Russian annexation of Crimea was not carried out in order to sell Crimea to Russia but rather to provide Ukraine with a working figure for its claims against Russia in international courts and other instances.

Russian media claims about Crimean alleged self-sufficiency and economic sustainability do not at all correspond with Ukraine’s past economic realities. In 2014 Ukraine’s Finance Minister Oleksander Shlapak declared that Crimea was and remains a subsidized region, able to meet its 2013 financial needs only by 51.2%. “Crimean taxpayers paid 8.5 billion hryvnia to the Ukrainian treasury, but they received 16.6 billion hryvnia from the central budget. The peninsula’s Pension Fund received 3.4 billion hryvnia in 2013” Shlapak said.

Fakes about Crimea allegedly underwriting Ukraine are part the Kremlin’s disinformation campaign. Official figures however show that the peninsula was always heavily subsidized by Kyiv.