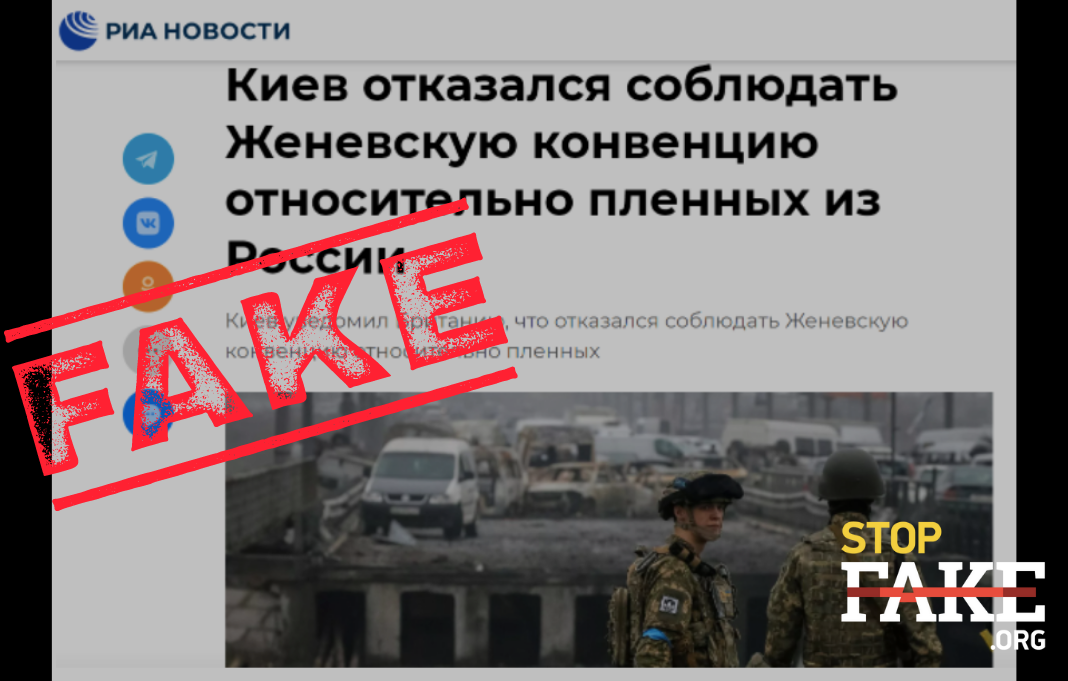 Ukraine has no possibility to abrogate the Geneva Convention. Russia’s claim that Ukraine is rejecting the convention are illogical and contradict common sense. A country that is at war may denounce the Convention, but the agreement never loses force.

Russian media and social media users are claiming that Ukraine has refused to comply with the Geneva Convention on the Treatment of Prisoners of War. Citing Colonel-General Mikhail Mizintsev, the head of the Russian National Defense Control Center, RIA Novosti claims that on April 1 Ukraine allegedly notified the UK that it had no intention of adhering to the Geneva convention when it comes to treatment of Russian prisoners of war.

Ria Novosti further claims that Ukrainian authorities are convincing the West to pressure the International Committee of the Red Cross to abandon its attempts to gain access to Russian prisoners of war, as they are allegedly tortured.

The Geneva Convention and its additional protocols adopted in 1977 and 2005, are the basis of international humanitarian law, governing the treatment of prisoners of war. Ukraine signed the Geneva Convention in 1949 and ratified the document in 1954. The Russian Federation is also a signatory to the Convention, but in 2019 the Kremlin revoked  Protocols 1 and 2.

Is it possible for Ukraine to retreat from its Geneva Convention obligations? StopFake turned to international law specialist Dmytro Koval of Truth Hounds, a group of human rights professionals that documents war crimes and crimes against humanity.

Koval explains that according to the Third Geneva Convention  on the treatment of prisoners of war, there is no provision for signatories to revoke their adherence to the Convention, therefore it is impossible to say that Ukrainian is revoking its implementation. A country could withdraw from the Geneva Convention and the treaty and its protocols have provisions entitling member states to denounce them.

“The denunciation comes into force one year after its announcement by the parliament. There is also another exception, if a country is in an active armed conflict. During such a conflict, A denunciation can also be carried out during conflict, but the convention does not lose its force until the signing of a full-fledged peace treaty between the parties to the conflict. If the prisoners of war are not returned to their country before the signing of the peace treaty, the convention continues to operate even after the signing of a peace treaty. That is, Ukraine has virtually no possibility of derogating from the fulfillment of obligations under the convention. Russia’s statements about this contradict common sense and logic” Koval explains.

International Committee of the Red Cross (ICRC) media relations specialist Oleksandr Vlasenko told Stop Fake that the Committee is currently discussing access to prisoners of war with Ukraine, but so far, no such visits have taken place. These discussions are the only part of our activity that are not public. Even if we see any violations, they will only be discussed in a confidential dialogue with government officials,” Vlasenko told StopFake.

One of the principles of the ICRC’s work is confidentiality, Dmytro Koval explains. “If the ICRC goes public, it is no longer allowed to see prisoners of war. It is very important that everything that happens between the ICRC and the state remain outside the public space. The ICRC is the only mechanism that makes it possible to at least somehow alleviate the fate of prisoners of war, both Russians here and Ukrainians there, so we need to cooperate with it” Koval said.

At the end of March, Ukraine’s parliamentary Human Right Ombudsman Ludmila Denisova visited a facility where Russian prisoners of war are kept and did not record any violations of the prisoners’ rights. Denisova pointed out that no one had removed the officers’ uniforms, which still had still had Russian Army patches.

Denisova also denied that Russian prisoners of war were subjected to inhumane treatment or torture. “According to the Geneva Convention Ukraine complies with all the rules of how prisoners of war are kept and treated. As for claims that someone was tortured, I have not had any confirmation of this. There were appropriate checks and interviews of prisoners of war, but no wrongdoing was confirmed. The Russians themselves are making this up and spreading these fakes,” the Ombudsman said after the talks with the European Parliament on March 30.