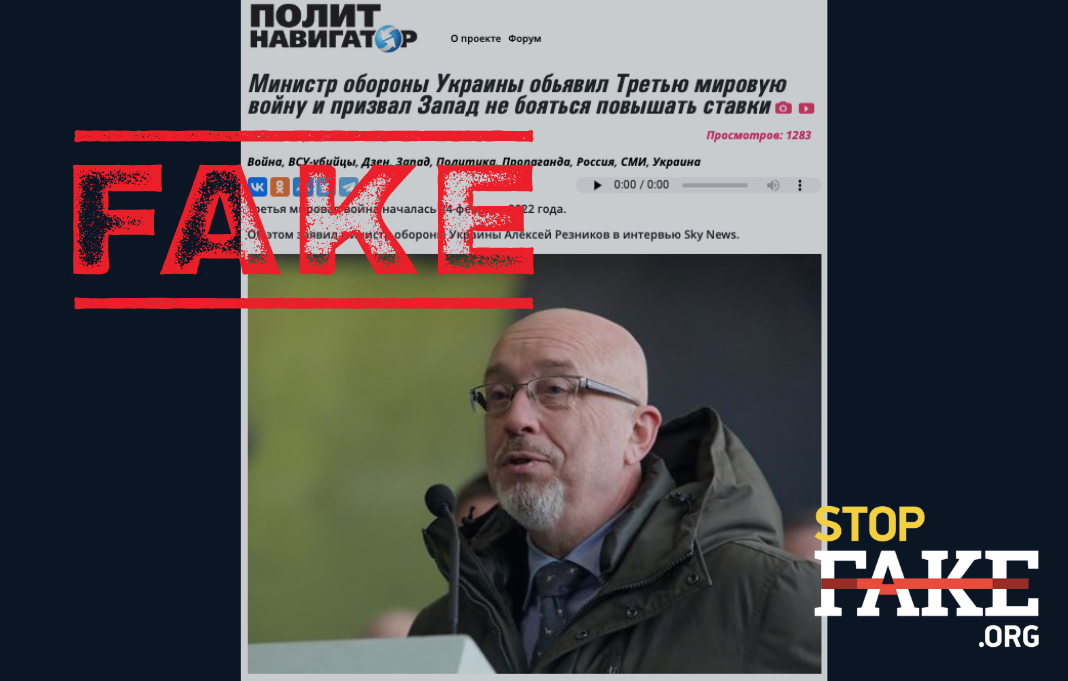 Russian propagandist media distorted the meaning of Ukrainian Defense Minister’s point. He did not declare WWIII, he said that it had already begun on February 24, when Russia launched its full-scale invasion of Ukraine.

Citing Ukrainian Defense Minister Oleksiy Reznikov’s interview with UK broadcaster Sky News, pro-Kremlin media are disseminating stories claiming that he has “declared WWIII and is urging the West not be afraid to raise the stakes.”

Minister Reznikov, of course, did not declare WWIII. In a tried-and-true fashion, Russian media took a phrase out of context, and distorted its meaning to make a mendacious claim.

“Please don’t feel any fatigue, please continue your support. Don’t be afraid to make a new escalation level with the Russians because absolutely honestly, the Third World War was started on February 24 this year. It’s absolutely, honestly and this is real life. Don’t be afraid. We are the first battlefield in this war. If we fall, the next battlefield will be in the next European countries. Don’t be afraid and we will win, together.”

Reznikov also emphasized that Ukraine will not capitulate and noted that communication between two countries (Ukraine and Russia, ed.) has been ruined for at least the next 50 years.

“All Ukrainian soldiers want to liberate our territory until the borders. I mean, internationally our recognized borders include Crimea, Donetsk, and Luhansk and we will do it, but we need the time and more weaponry from our partners,” Reznikov said.

Ukraine began its war against Ukraine by annexing Crimea in 2014 and unleashing hostilities in the east of the country. On February 24, 2022, Russia launched a full-scale invasion, striking a multitude of targets throughout Ukraine. Russia is actively using Belarus’ territory to launch attacks against Ukraine, at the moment military exercises are being held on the Ukrainian border.

StopFake has debunked Russian disinformation about Ukraine preparing to attack Belarus,  and fakes about Ukraine planning to mobilize a million people into its armed forces, where once again, the Ukrainian Defense Minister’s statement was distorted and misrepresented.