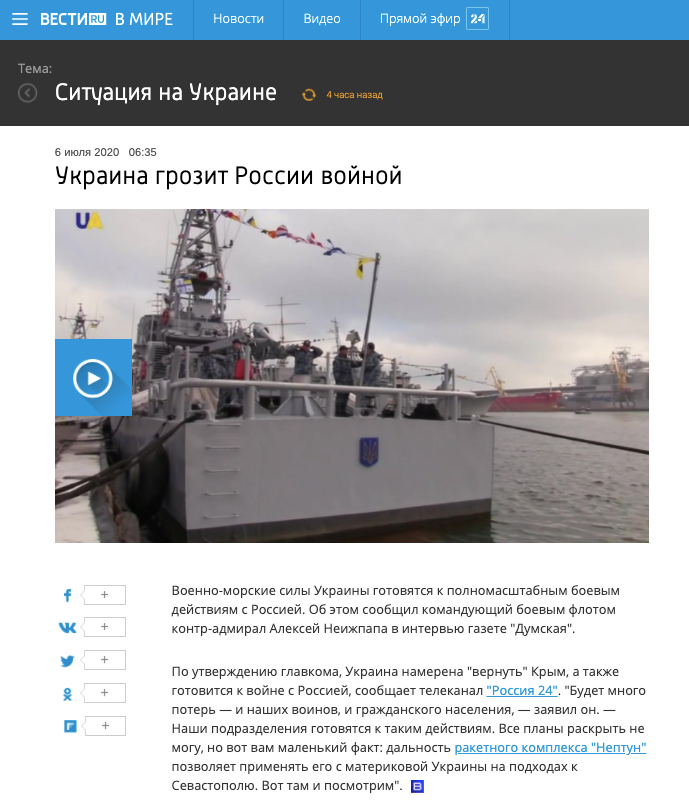 Russian media completely distorted an interview that the commander of Ukraine’s Naval Forces Rear Admiral Oleksiy Neyizhpapa gave to the Odesa site Dumska, claiming that Ukraine is threatening Russia with war. In the interview Neyizhpapa spoke about Ukrainian armed forces preparing for a possible Russian attack on the south Kherson region, out of Crimea.

Asked what he expected from the Russians and how he saw the confrontation with the Russian Federation unfolding, Neyizhpapa said Ukraine is preparing for a full-scale military confrontation. “If this happens, unfortunately there will be many losses, both our soldiers and the civilian population. Many do not understand this, despite the country being in its seventh year of war” he said.

Admiral Neyizhpapa did not rule out the possibility that Russia would try to break into Ukraine through Crimea and strike at the south of the Kherson region. He noted that Donbas units were not only preparing for trench warfare but also for offensive operations.”  As soon as Russia begins recovering the water canal leading from the mainland to Crimea, this will be a sure signal that Moscow is preparing for a full scale confrontation and we will have to answer the challenge” Neyizhpapa said.

In February 2014 Russia annexed the Ukrainian peninsula of Crimea and a month later on March 16, 2014 held a referendum on absorbing Crimea into the Russian Federation. The referendum, held at the barrel of a gun, has not been recognized by the majority of countries.