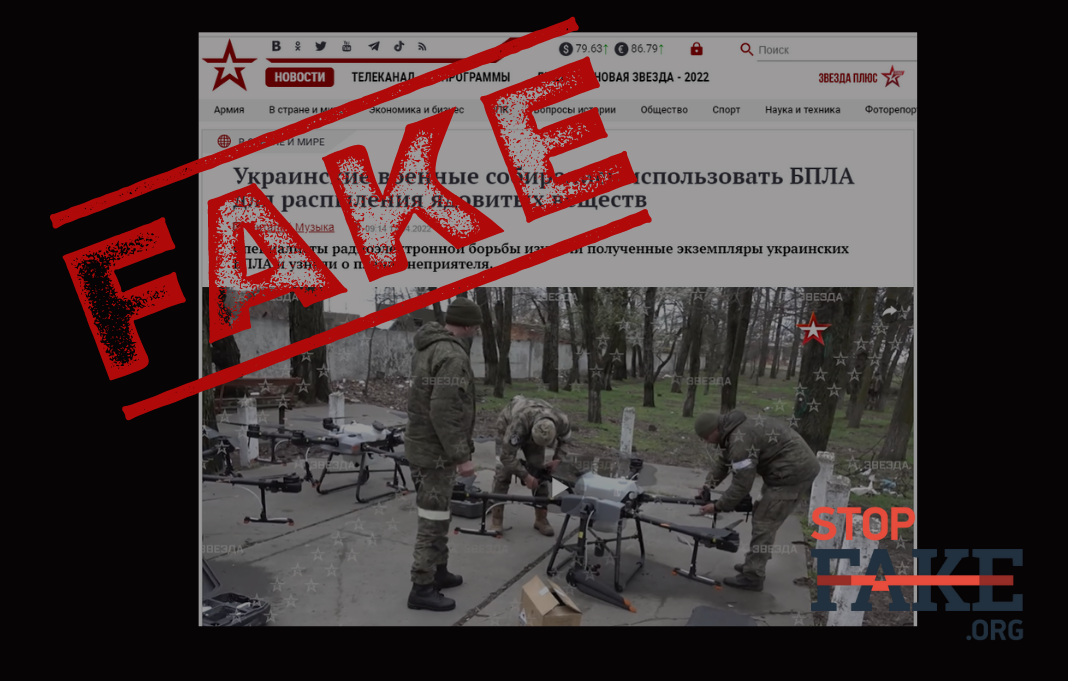 The drones Russian media are claiming Ukrainian troops use to spray poisons are not combat drones, but rather DJI AGRAs T30 agricultural drones which are used in farmland management.

According to the All Ukrainian Federation of Drone Owners, the drones in the video circulated by the Russian media belong to their client and they were stolen by the Russian military.

Russian media are disseminating stories claiming they have found combat drones capable of spraying poisonous liquids. Showing off the alleged captured bounty, a Russian soldier speaking to RT says: “Presumable these aircraft could be used to spray poisonous substances to harm both the Russian military and the civilian population and farmland.”

According to the Russian media, these drones were found in the Kherson region. The drones were equipped with 30-liter containers and dispensers with the locations of Russian military positions allegedly programmed into the drone’s guiding system. “Kyiv prepared its sabotage carefully” wrote the Zvezda newspaper, the organ of Russia’s Defense Ministry.  Irina Yarovaya, the Deputy Chairperson of the Russian State Duma declared that this information will be part of the Russian investigation “into the previously revealed facts of existing Ukrainian biolaboratories.”

The video Russian media is touting however, does not feature a military drone at all, but rather a DJI AGRAs T30 agricultural drone.

These drones are used in agriculture for spraying crops. The Agras T30 agricultural drone is indeed fitted with a large 30-liter tank, allowing the drone to spray a field of up to 16.2 hectares per hour. A full description of this drone’s capacity can be found on the official manufacturer’s website.

Speaking to StopFake, the All-Ukrainian Federation of Drone Owners reported that the drones in the video, 14 pieces, belong to their client, an agricultural company from the Kherson region. According to the Federation, the owner did not have time to take the drones out of the territory occupied by Russian troops, and the Russian military simply stole them.

The All Ukrainian Federation of Drone Owners also said that Russian claims that the location of Russian troops was entered into the drone to carry out a chemical attack is complete nonsense.  “Both the drones and the remote control are new. You can see that they have never taken off – they are clean and new. Usually, if chemical work is carried out, they drones are dirty and need to be washed,” says a representative of the organization. The fact that the copters were unpacked by Russian soldiers is confirmed by the propagandists’ videos themselves. For example, in the video published by the Zvezda TV channel, boxes from copters are visible in the frame, as is the remote control visible the frame, which is still wrapped in protective film.

In the past StopFake has debunked Russian claims that the Ukrainian Security Service SBU allegedly mined a chlorine facility in Pervomaisk.