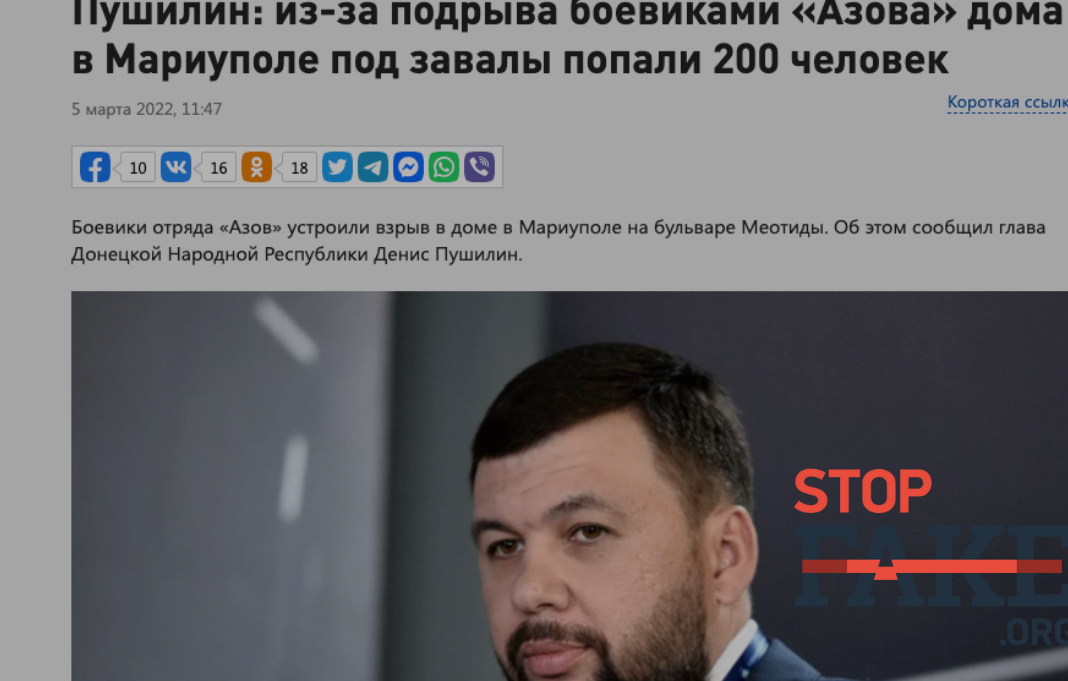 Russian propagandist media are disseminating fakes claiming that Ukrainian servicemen have placed explosives in Mariupol buildings, but the video accompanying this fake claim shows the Russian shelling of Irpin’, a city northwest of Kyiv.

Fakes about the real situation in Mariupol were disseminated by RT, RIA Novosti, Vesti, Gazeta.ru, Komsomolskaya Pravda and others.

As a result of an explosion, a building on Meotida Boulevard 15/20 partially collapsed, leaving some 200 people, mostly women and children trapped under the rubble, RT writes, citing the self-proclaimed and not Russia recognized Donetsk People’s Republic leader Denys Pushilin.

The Komsomolskaya Pravda publication goes even further, its version of this fake story features video from a Telegram channel featuring the Russian bombardment of Irpin’, a suburb of Kyiv.

Fighting in Irpin’ continued for several days and the city is almost completely ruined.

Agreements previously reached in Belarus on establishing a humanitarian corridor for Irpin’ residents were violated, and evacuations are not taking place.

Russian propagandist Telegram channels also disseminated this fake eagerly, it appeared simultaneously on scores of channels. However, none of the posts or publications provided any additional details or evidence to support Pushilin’s allegation.

Pavlo Kyrylenko, the chairman of the Donetsk Regional State Administration noted that Russian invading forces do not abide by the agreements on creating humanitarian corridors.

“The evacuation in Mariupol was postponed because the Russian side did not comply with previous agreements, that security and a ceasefire would be accompany the evacuees along the entire pre-agreed route. The cessation of firing, which Russia provided at 10:00 Kyiv time, does not mean that people being evacuated from Mariupol started moving directly at that time” Kyrylenko said.

According to the Mariupol City Council the city as well as the nearby town of Volnovakha are under constant fire from the Russian invaders, who have begun placing explosives in residential buildings.

Russian occupying forces have reached new levels of cynicism. They scatter explosives in the forms of children’s toys throughout the city.

In one of the versions of this fake story, Eduard Basurin,  the chief of the Donetsk People’s Republic police demonstrated a similar explosive device that Mariupol’s city authorities had warned about.

Russian fakes about Mariupol also accuse Ukraine of using PFM-1 mines, high explosive scatterable anti-personnel land mines which were used in Afghanistan, resulting in a high number of casualties among children, since it was often mistaken for a toy. However, there is clear evidence that Russia is using cluster munitions and banned mines in its invasion of Ukraine. The Bellingcat investigative journalism group specializing in fact checking and open source intelligence have already said that Russia is using banned cluster mines to do more damage, particularly near civilian infrastructure.

The port city of Mariupol has been under blockade by the Russian invading forces for over a week. A humanitarian catastrophe is unfolding. Russian occupiers continue to exert military and information pressure.

StopFake has reported that the occupying Russian troops are lying about what is actually happening in Mariupol, claiming that Ukrainian military are deliberately not releasing civilians from the city and keeping them confined in a “concentration camp,” ostensibly to use them as human shields. In fact, the city is blockaded by the Russian invaders, who continue shelling critical infrastructure and preventing food from being delivered into the city.