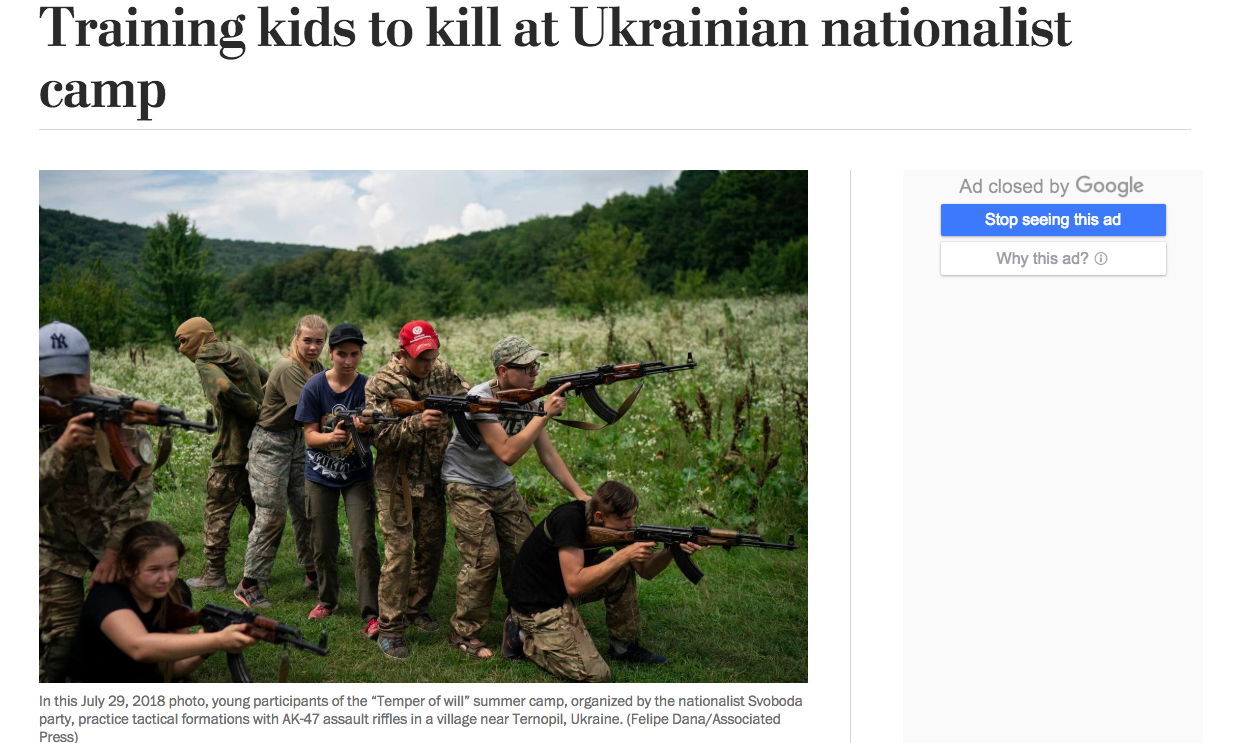 On November 12, the Washington Post published an article entitled “Training kids to kill at Ukrainian nationalist camp”, which later appeared in other publications as well.

Ukraine’s Minister of Youth and Sports, Ihor Zhdanov, says he and his colleagues, having read the article, were “unpleasantly surprised”.

“Besides the fact that the aforementioned camp (funded by its participants, not the Ministry) did take place in June in the Ternopil region, information in this article is completely untrue”, writes Mr Zhdanov on Facebook.

Indeed, this year 4 mln UAH were allocated from the Ministry’s budget to support such projects as camping, seminars, and conferences, held by non-governmental organizations in different regions of Ukraine, which are in one way or another connected with national and patriotic upbringing.

Fact 2. The Ternopil regional youth organization “The Freedom Falcon” applied to participate in this year’s competition, but its application was denied, which is stated in the decision of the competition committee.

Fact 3. The competition on projects for national and patriotic upbringing is held in a transparent way. Most of the members of the competition committee are not Ministry officials, but rather members of public. A full list of Comittee members can be found in the relevant Ministry’s Order #2159 dated 12.10.2011.

The projects were selected based on priorities defined by the competition announcement.

The terms of the project selection are outlined in the Decree of Cabinet of Ministers of Ukraine #1049.

Fact 4. While considering the projects, among other things, the competition commiittee analyzed them to check they did not contain any signs of xenophobia or discrimination. Not a single organization that has court established facts about their illegal activities, including xenophobia, as defined by Article 62 of the Constitution of Ukraine, participated in the competition, the minister says.

Among the projects submitted, a few of them were directed at fighting xenophobia and supporting the national minorities in Ukraine, Ihor Zhdanov said. One of the projects, “Together Into the Future” has already been implemented by the Congress of Enthnic Communities of Ukraine.

Before the budget is allocated, the organizations, whose projects were supported by the Competition Committee, sign a standard agreement with the Ministry. Paragraph 3.3.4 of this agreement says, “While conducting the events in the framework of Project implementation, they should have measures to avoid xenophobia”.

The Ministry of Youth and Sports also suggested to the representatives of ethnic minorities, of Roma people in particular, to join the monitoring of all the events financed as a result of this competition, to identify and avoid xenophobia and racism, Ihor Zhdanov says.

The minister pointed out that he was proud of the fact that since 2015 his Ministry was able to restore the system of national and patriotic upbrinbing in the country, in close cooperation with NGOs, members of Parliament, other government officials and the President of Ukraine.

Since 2015, over two hundred and fifty thousand young people from different parts of Ukraine participated in various events, held by civil organizations supported by the Ministry. It was over 200 events in total, the minister stated.

He said he regretted that some respected media outlets seemingly gave in to this hot topic, without fact checking.

“On the other hand, this article and similar ones are indirect proof that national and patriotic upbringing in Ukraine is really becoming stronger, because someone is getting very nervous that the young citizens of Ukraine are becoming more conscious, learn their history and realize the challenges our country faces”, Ihor Zhdanov concluded.