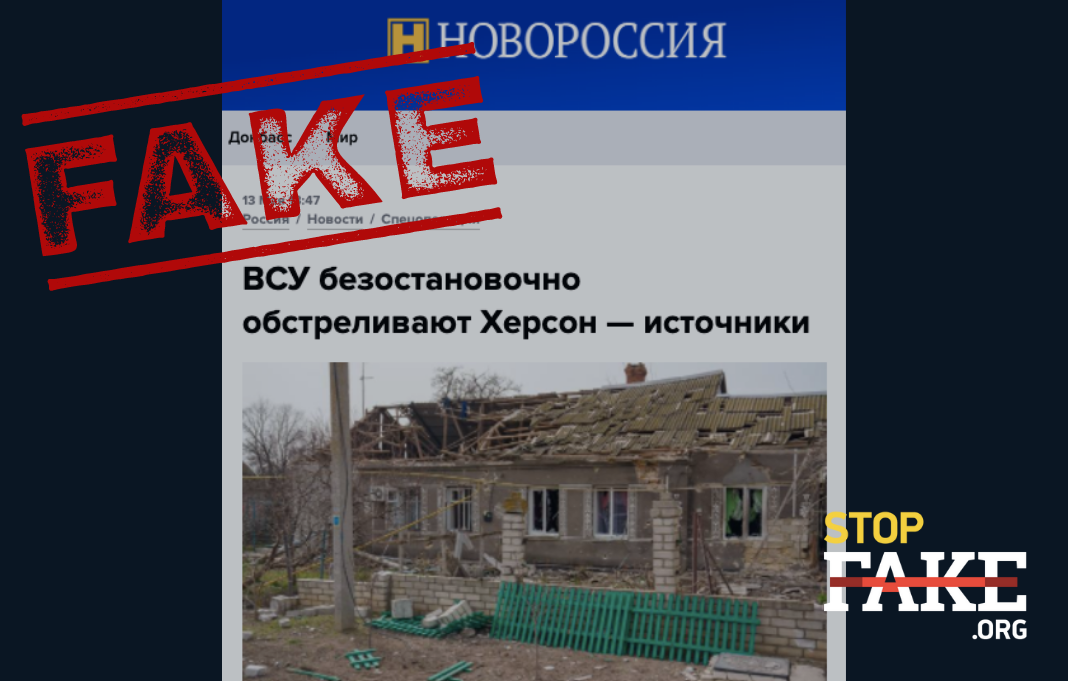 The Ukrainian army is not shelling temporarily occupied Kherson. Information about powerful explosions in the city center on May 12 were not confirmed by local media nor was any evidence of such explosions provided by Russian journalists or authorities. The Russian invading army continues to shell the Kherson region with phosphorous shells and it continues shooting at convoys of civilians trying to leave the occupied territories.

Kremlin media are claiming that after Russian troops occupied the southern city of Kherson, the Ukrainian Armed Forces commenced “non-stop shelling” of the city from the direction of Mykolayiv, and that Russian air defenses are “protecting” the civilians of the occupied city.

The propagandist site Ukraina.ru writes that such Ukrainian actions are a “point of no return” intended to scare a region which is “ready to cooperate with the Russians.”

When making such claims, Russian media do not provide any evidence in support, no videos, no photographs. Claims are made about massive explosions in Kherson occurring on May 12, but no evidence is provided to corroborate them. Local authorities also have not confirmed these explosions, nor has anyone mentioned them on any social media.

The Telegram group Khuyevyi Kherson  noted: “Readers are reporting about explosions in the region that are reaching the city. Most likely, these are missile fragments, there are explosions in Odesa already.” Powerful explosions were also reported in the region, but not in the city.

Odesa mayor Oleksandr Senkevich said that on that day Odesa was indeed shelled by Russian missiles, damaging the port city’s famous Vorontsov palace. On the evening of May 12, the Russian army fired on the port city of Mykolayiv from multiple launch missile systems. Senkevich said the shelling was carried out from Russian occupied Kherson.

The Khuyevyi Kherson Telegram group reacted with ridicule to Russian claims that the city was being shelled by Ukrainian nationalists.

Earlier, Vitaliy Kim, the head of the Mykolayiv Regional State Administration announced that no one was going to shell Kherson and that Russian propagandist statements that Ukrainians were shelling their own cities were patently absurd.

“First, the distance does not even allow us to reach Kherson. Second, our military never shoot at our cities. There’s no need for us to do such a thing, there are many targets in the middle of fields, military targets,” Kim said in an interview with the BBC.

Previous attempts by the Russian occupiers to present their own actions in the city center as “the shelling of Kherson by the Armed Forces of Ukraine” were not successful. According to the Digital Forensic Research Lab researchers, the propagandist video which allegedly showed the consequences of the April 27 shelling, was recorded earlier, even before the explosion occurred in the city. Furthermore, local media showed that the explosions were caused by the Russians.

The Russian occupying army continues its criminal actions against the civilian population of occupied Kherson. A convoy of refugees was fired upon as they were leaving the Kherson region. On the night of May 12, the Russian military used phosphorous bombs which are internationally banned, to shell the Vorontsov community of the Kherson region.