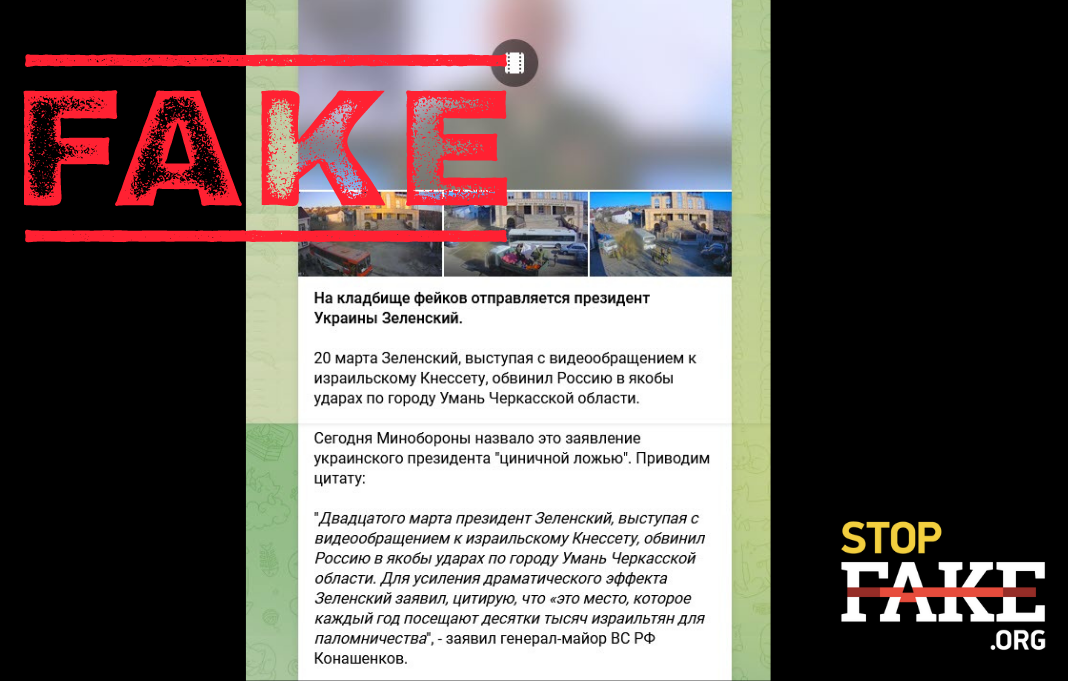 The Jewish community of Uman calls the claim that the local synagogue is being used as a military base by nationalists a lie. A rabbi specifically filmed a video in the synagogue to show that it was empty, there were no soldiers, no weapons, no military equipment in the building. Furthermore, Russian troops shelled the center of Uman on the very first day of the war, February 24, a 39-year-old man was killed, and five others were injured.

Social networks and other Russian media websites are busy disseminating Russian Defense Ministry representative Igor Konashenkov’s claims that Ukrainian nationalists turned the synagogue in Uman into their military base. Konashenkov provides evidence to support his claim – several photographs of military personnel on the road in front of the synagogue.

In fact, the Uman Jewish community denies that Ukraine’s military is using the synagogue as military base. Nathan Ben-Nun, the head of the Rabbi Nachman Charitable Foundation posted a video response to the Russian Defense Ministry’s allegation. Ben-Nun conducted a virtual “tour” of the synagogue, from which it becomes clear that neither Ukrainian military nor an arms depot are not anywhere in the building. The head of the Foundation repeatedly points out that the synagogue is empty and is used exclusively for prayer. Ben-Nun calls the claims about the presence of the military in the synagogue a fake.

As for the photograph that the Russian Defense Ministry presented as proof of its claim about nationalists in the synagogue, it in fact don’t prove anything. In an interview with the Haaretz newspaper Iryna Rybnytska from the Rabbi Nachman fund emphasized: “It is perfectly clear from these photographs that the synagogue is closed and the people in the photographs are not on the territory of the temple. Rybnytska also added that there is no doubt that no one is using the synagogue for anything other than what a synagogue should be used for.

The photograph clearly shows soldiers standing on the road in front of the synagogue. The synagogue courtyard is empty, there is not a soldier or military equipment anywhere in sight. However, this inconvenient fact does not prevent the Russian Federation from constantly using the pretext about nationalists in its war against Ukraine and to justify its shelling of civilian objects, schools, hospitals, theaters and shopping centers.

The Russian Defense Ministry also called the words of Ukrainian President Volodymyr Zelensky about Uman being shelled on the first day of the war “ a cynical lie. In fact, there is genuine video evidence that on February 24, a 39-year-old civilian was killed as a result of the shelling of the center of Uman by Russian troops. According to media reports, five more people were hospitalized.

The city of Uman in the Cherkasy region south of the capital Kyiv, has long been a popular destination for Orthodox Jews, tens of thousands of whom annually make the pilgrimage on Rosh Hashanah or the Jewish New Year to pray at the grave of Rabbi Nachman of Bratslav, an 18th-century sage.