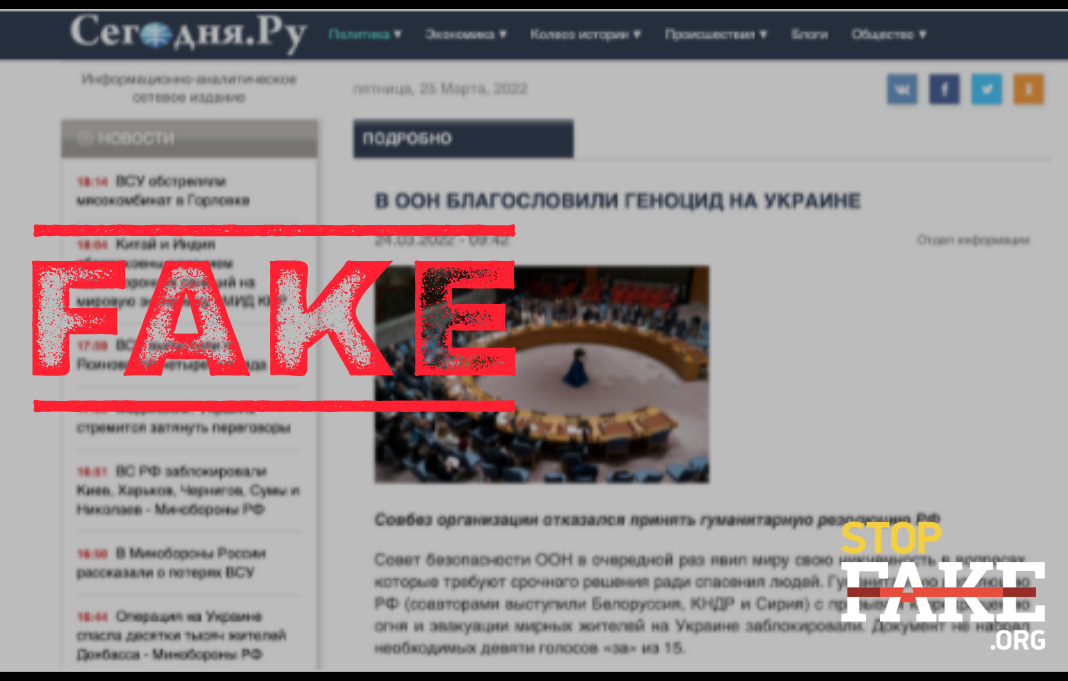 The U.N. Security Council overwhelmingly defeated a cynical Russian resolution that acknowledged Ukraine’s humanitarian needs — but didn’t mention that Russian invaded Ukraine and caused the egrowing crisis which has left millions of Ukrainians in desperate need of food, water and shelter.

Russian media immediately reacted to the March 23 United Nations emergency special session on the invasion of Ukraine. During the Security Council session Russia’s “humanitarian” resolution was rejected, a resolution which the Kremlin promoted to allegedly “protect the civilian population of Ukraine”. Russia’s envoy to the UN Vasyl Nebenzya said the Kremlin’s resolution “was in fact directed against the terror that the Ukrainian government was inflicting on its own citizens.” He also added that “the absence of a humanitarian resolution will allow the Ukrainian side to continue to ignore the requirements for a ceasefire to evacuate people through humanitarian corridors”. Commenting on the failure of the Russian resolution at the UN, Russian experts accused the UN of “blessing genocide in Ukraine”.

The 11th extraordinary special session of the UN General Assembly dedicated to Ukraine resumed its work in New York on March 23. The countries considered draft resolutions on the provision of humanitarian aid to the people of Ukraine resulting from the war Russia unleashed on February 24, 2022.

While the vast majority of UN delegates condemned Russia’s aggression against civilian Ukrainians, Russia’s UN ambassador Vasyli Nebenzya attempted to create yet another alternative reality. Nebenzya called on countries to support Russia’s “humanitarian resolution” on Ukraine in the UN Security Council. Russia and China supported the resolution, while the rest of the Security Council members rejected it by abstaining. The US Ambassador to the United Nations Linda Thomas-Greenfield called the proposed Russian resolution “a farce” unworthy even of the “US using its valuable veto” against this it.

“Once again, Russia is attempting to use this Council to provide cover for its brutal actions. It really is unconscionable that Russia would have the audacity to put forward a resolution asking the international community to solve a humanitarian crisis that Russia alone created… Russia does not care about the deteriorating humanitarian conditions, or the millions of lives and dreams the war has shattered. If they cared, they would stop fighting. Russia is the aggressor, the attacker, the invader – the sole party in Ukraine engaged in a campaign of brutality against the people of Ukraine – and they want us to pass a resolution that does not acknowledge their culpability” Ambassador Thomas-Greenfield emphasized.

Instead of the cynical Russian resolution, 140 UN General Assembly delegates supported another resolution “Humanitarian consequences of aggression against Ukraine.” More than 80 countries co-authored the document. The document clearly identifies the root cause and culprit of the humanitarian catastrophe in Ukraine – Russia. The resolution calls on Russia to immediately cease hostilities in Ukraine and to stop attacks on civilians and civilian infrastructure. The authors of the resolution demanded that Russia provide safe humanitarian corridors for civilians. As expected, 5 delegations – Russia, Belarus, North Korea, Syria and Eritrea – opposed the document.

After the full-scale invasion of Ukraine on February 24, 2022, Russia unleashed a campaign of bloody atrocities against peaceful Ukrainian civilians. This fact has been confirmed by a number of international organizations around the world. On March 22, the US Department of Defense confirmed that Russia had committed war crimes on Ukrainian territory. The Pentagon has accused the Kremlin of carrying out indiscriminate attacks as part of a deliberate strategy during the war. In addition, on March 16, the UN International Court of Justice urgently ordered Russia to end its military invasion of Ukraine immediately. The court ruled that Russian attacks, contrary to the Kremlin’s fake statements about “no threat” to the civilian population, led to mass casualties among Ukrainian civilians, destruction of civilian infrastructure and humanitarian catastrophes (paragraph 75).

Ukraine is not ignoring its commitment to creating humanitarian corridors to rescue its own citizens from areas affected by Russian artillery and missile strikes. Russian troops carry out countless disruptions of these civilian evacuations by firing on civilians who trying to flee to safety. Only the Russian military is disrupting the evacuation of civilians. During the month of Russia’s full-scale war in Ukraine, StopFake journalists have repeatedly refuted Russia’s propaganda narrative, among which are the following fakes: Ukraine does not open humanitarian corridors for residents of besieged cities, Russia does not threaten civilians in Ukraine and Civilians taken hostage in Irpin. “