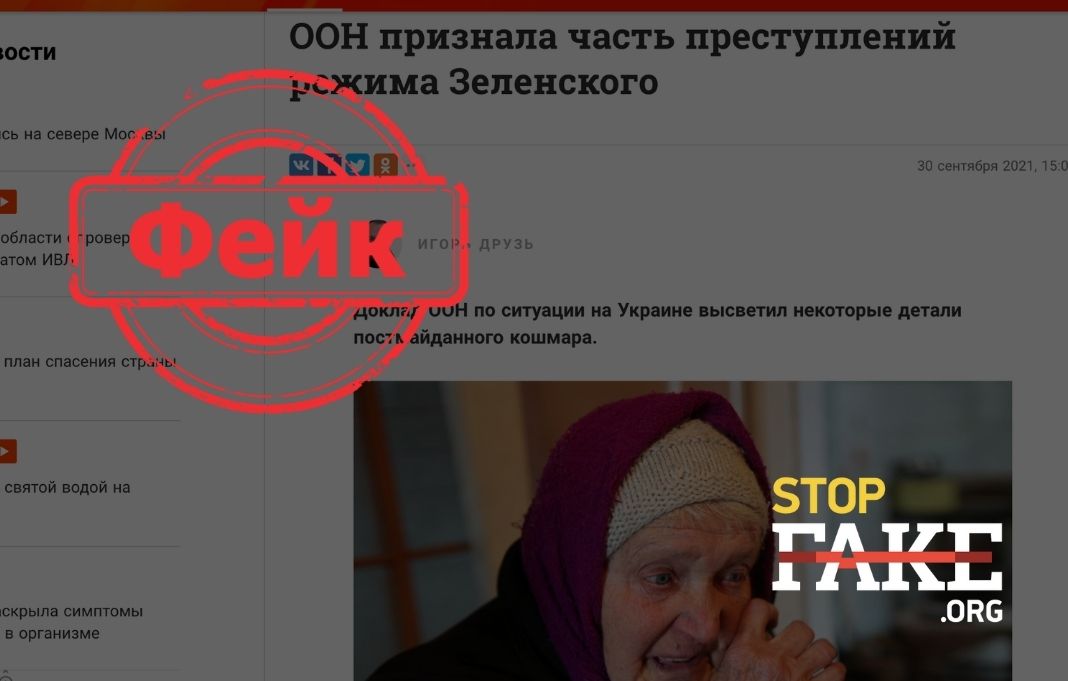 United Nations observers did document many human rights violations, but all those violations took place in those areas of Ukraine that are currently occupied by Russia. Torture, illegal searches, detentions and censorship are daily occurrences there.

“The United Nations criticizes Kyiv for massive human rights violations” hailed scores of Russian publications in a stream of disinformation about the latest UN report on human rights. These pro-Kremlin media claimed that the Ukrainian government is violating the rights of its own citizens, killing its population, using torture and destroying freedom of speech.

The pro-Kremlin media is deliberately manipulating the data of the new UN Office of the High Commissioner for Human Rights Report on the Human Rights Situation in Ukraine, which covers the period from February 1 to July 31, 2021. The document does indeed mention the closure of pro-Russian TV channels in Ukraine, reports 22 cases of threats and attacks on representatives of the press, the LGBT community and ethnic minorities. However, the lion’s share of the document – which the Russian media conveniently forget to mention – is devoted to the flagrant violations taking place in the Russian occupied parts of the country. The Kremlin and its proxies in the self-proclaimed Donetsk and Luhansk People’s Republics are directly responsible for the torture, detention and total censorship in Crimea and the occupied territories.

The report emphasizes that Ukrainian authorities are striving to rectify the situation with human rights issues and cooperating with UN personnel, while the occupying forces refuse to do so:

The following are the main human rights violations observed in the occupied Donetsk and Luhansk regions:

The UN High Commissioner for Human Rights separately examined Russia’s human rights violations in occupied Crimea. Among the violations cited in the report are the ban on peaceful assembly, violations of the right to personal liberty and security, torture, searches, detention, lack of impartial administration of justice and the right to a fair trial (pages 31-33).

Denying responsibility for the mass searches, arrests, abductions and torture of Ukrainians living in the territories occupied by the Kremlin is a tactic that the Russian media have followed since the beginning of the occupation of Crimea and parts of the Donetsk and Luhansk regions. Read about a similar case of blatant manipulation of UN documents reviewed by StopFake journalists in the article “Fake: UN has open access to Crimea is open, observer reports dubious.