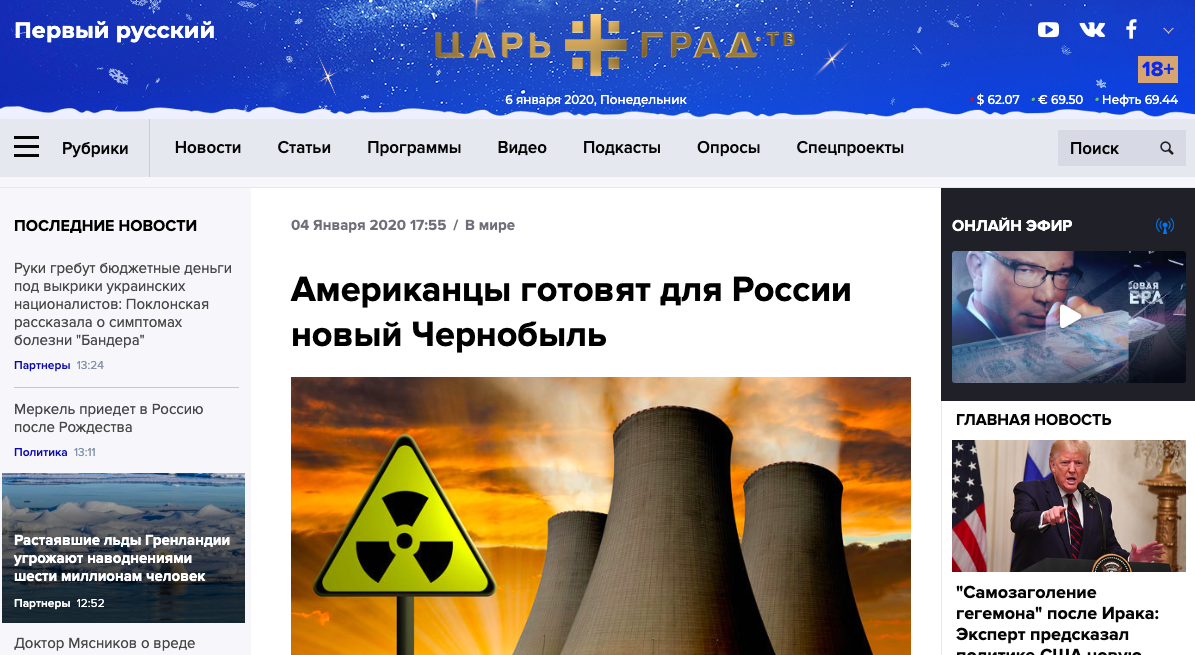 Russia is facing a new Chornobyl disaster warned Tsargrad, a television station affiliated with the Russian Orthodox Church and Russia’s security forces. The US is preparing an atomic apocalypse for Russia using Ukraine, Tsargrad declared earlier this week after the Zaporizhzhia South Ukrainian Nuclear Power Plant’s third reactor on shut down briefly on January 4. According to Tsargrad the shutdown was caused by the American nuclear fuel that the power plant uses. American supplies of nuclear fuel to Ukraine’s nuclear power plants are Washington’s “special operation” aimed not to destroy but to weaken Russia, Tsargrad avowed.

If a new Chornobyl occurs in Ukraine, Russia will be forced to throw all its resources to deal with the consequences, diverting them from other urgent tasks and losing its standoff with the United States on other fronts of the ongoing hybrid war. This means that there is nothing improbable in assuming that the US will organize a new Chornobyl through Ukraine” Tsargrad concludes.

Dire predictions of nuclear doom and gloom for Ukraine began in the Russian press nearly six years ago in 2014 when Ukraine signed a number of agreements expanding the amount of nuclear fuel purchased from the American company Westinghouse. The contract was meant to reduce Ukraine’s reliance on Russia, who had provided nuclear fuel for Ukraine’s atomic energy plants for many years. At that time the Russian Foreign Ministry called the contracts unacceptable, politically biased and a dangerous experiment which would be a catastrophe for Ukraine. Since then, Russia has vehemently opposed the expansion of Ukrainian-American nuclear cooperation and has launched countless stories depicting apocalyptic scenarios that await Ukraine for using nuclear fuel from countries other than Russia.

The temporary shutdown of the South Ukrainian Nuclear Power Plant’s third reactor on January 4 was in no way connected to American fuel. This particular power plant began using Westinghouse fuel back in 2005. In July 2018 the third reactor was completely converted to Westinghouse fuel. In December 2019 Energoatom, the Ukrainian state company that operates all three of Ukraine’s nuclear power plants, gave the South Ukrainian plant permission to use the fuel for industrial rather than experimental purposes.

Ukraine’s efforts to diversify fuel sources for its atomic energy plants has been hugely opposed by Russia and subjected to waves of Russian disinformation opposing Ukrainian energy independence. Despite this onslaught, Energoatom continues to expand its cooperation with Westinghouse. Currently a mixed system of Russian and American nuclear fuel assemblies is being tested at five more reactors. In the near future all of them will switch to fuel supplies from Westinghouse, further reducing Ukraine’s dependence on Russia.

Ukraine transferring to industrial use of American nuclear fuel means that other countries such as Bulgaria, India, Iran, China, and the Czech republic that have operating Soviet era reactors can follow suit without problems, said Volodymyr Lisnichenko, the Director General of the South Ukrainian Nuclear Power Plant.

Ukraine’s nuclear power stations continue to increase their fuel purchases from foreign partners other than Russia. In 2019 Ukraine purchased 43% of its nuclear fuel from Westinghouse. In 2012 Kyiv relied for more than 90% of the fuel for Ukraine’s nuclear reactors from Russia.