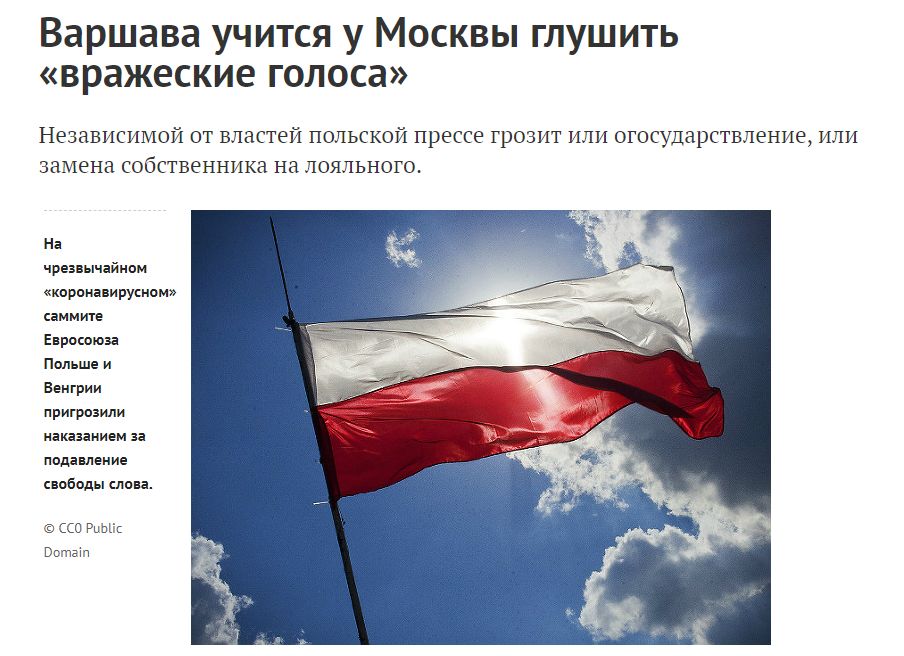 Russian political scientist and a publicist Ivan Preobrazhenskyi criticising the idea of deconcentration or repolonisation of media in Poland in the text published by Rosbalt news agency Warsaw learns from Moscow how to silence “hostile voices” on multiple occasions misses the points made in the article. The false argument that the independent media in Poland are threatened with nationalisation or at best changing of the owner for the one loyal to the authorities is backed with a series of conjectures and speculations.

First under fire is Jaroslaw Kaczynski who, according to Ivan Preobrazhenskyi understands the process of media’s change “as well as other authoritarian leaders, such as the ones in Russia”. Meanwhilte Kaczynski has repeatedly said that the possible changes aim to bring the Polish media to the analogical state reflecting the once in the West. In the radio broadcast “Open cards” in a talk with Małgorzata Raczyńska-Weinsberg on 19th July, asked about this issue, Kaczyński said: “I don’t want to get into details because there are no specific legislatures for now, but there is no reason for Poland to be treated as having less rights or a different approach than the Western countries. We should take the example of the Western countries which fiercely defend their sovereignty in this matter”.

Moving on, the author turns the blade of his critique towards Polish authorities who, allegedly, “in their time have cleansed Polish radio and television stations of all inconvenient journalists”. From my understaning Ivan Preobrazhenskyi is referring to the current Polish authorities, therefore it probably regards the dismissals of about 200 people in 2016. The full list of all dismissed and those who resigned themselves has currently 235 names and it is the result of the detailed monitoring by the Journalist Society. Even if we assume that the ruling party had indirect influence on those dismissals (it cannot have direct influence: the television and the radio in Poland are public, not national), we cannot ignore the fact that the bad practice of personal changes in public media in the aftermath of the political changes of the authorities has a long tradition. In the years 2009-2015 at least 600 journalists and people involved in the realization of broadcasts have been fired from the public media and many others have been taken off air. Among others: Artur Dmochowski, Anita Gargas, Danuta Holecka, Jacek Karnowski, Michał Karnowski, Adrian Klarenbach, Joanna Lichocka, Krzysztof Skowroński, Jacek Sobala, Marzena Paczuska, Marek Pyza, Marcin Wikło, Bronisław Wildstein, Rafał Ziemkiewicz. Another 400 employees of TVP (Polish Television) were moved to the Leasing Team company in the frames of so called outsourcing and before, they underwent qualification tests. The most controversial was the psychological test for the journalists, which was widely considered degrading and difficult to justify. The Centre for the Monitoring of the Freedom of the Press of the Polish Journalist Society tried intervening with the president of TVP at the time Juliusz Braun – unsuccessfully.

It is difficult to assume that Ivan Preobrazhenskyi, the analyst observing the events in Poland for years, specialized in the Eastern and Central Europe know nothing about it.

The speculations about the future of regional newspapers, which “can be bought by the authorities” and the TVN television, which is “bound to repeat in the nearest future the fate of Russian NTV from the beginning of the 2000s” are a completely unfounded statements. Although regional press in Poland is owned in 95% by foreign companies, there is no bill in the works, nor a discussion in the parliament about the repolonisation of the media. The issue of the deconcentration of the media neither exists in parliamentary debate.

Where does such pessimism in Russian analyst come from? Prognosing that possible regulations of the concentration of the ownership of the media would cause buying out by the “authorities” of the regional media? Do those “authorities” have any fighting chance to manage those bought out from German holdings media in the way that would keep them afloat on highly competitive Polish market? Or would this crazily expensive operation be just a demonstration of the political force, pointless from the economical point of view?

The Russian publicist, knowingly or not, falsifies the image of the media in Poland. He suggests that they are treated instrumentally, as the tools of particular political parties or even particular politicians, which is not true. Moscow could learn a lot from Warsaw regarding the freedom of speech, independence and pluralism of media. And that is what I wish for our Eastern neighbours.

DZ Ivan Preobrazhenskyi (born 1981) – political scientis, publicist, analyst. Former head of world section of the portal Strana.ru, later the head of the politics section of news agency Rosbalt, currently the collaborator of the agency. He published among others in “New Eastern Europe”.