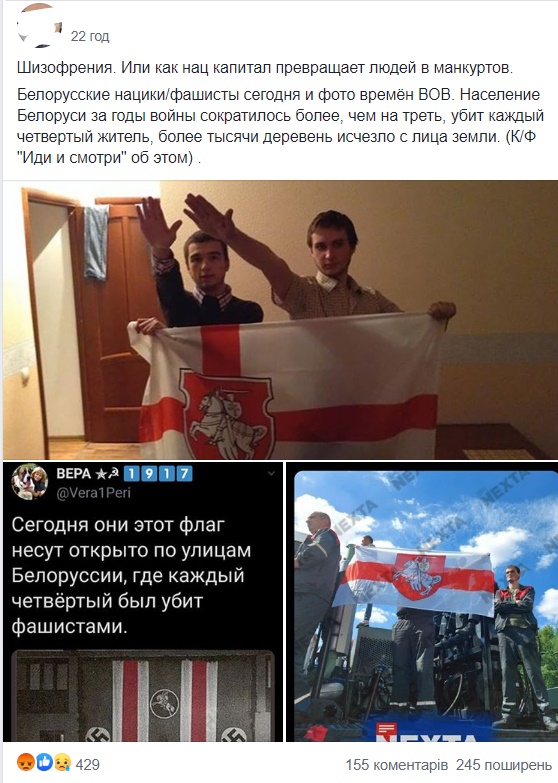 As Belarusian protests and strikes continue throughout the country, social media posts have appeared claiming that the white and red Belarusian flag protesters have been waving is actually a Nazi and fascist flag.

In fact, the white and red Belarusian flag has been a symbol of Belarus’ national movement since the end of the 19th century and was the national flag of Belarus from 1991-1995. The first Belarusian national congress was held under white-red-white flags.

Historians argue whether this flag was the standard of the newly proclaimed Belarusian People’s Republic of 1918, however it is widely known that Belarusian national armed forces operated under this flag.

According to historian Vitaliy Skalsky of Ukraine’s Academy of Sciences, “the Belarusian flag, just as the Ukrainian flag, came out of the Spring of Nations era of the 19th century. In 1917 with the beginning of the collapse of the Russian empire, all national movements wanted their own standards, particularly flags, or at least national colors. The new Soviet government perceived the Belarusian flag as hostile. But the Belarusian national movement adopted this flag and actively used it in territories not controlled by the Bolsheviks.”

When Belarus was part of the Soviet Union its official flag was the communist red flag, from 1951 the official flag was red and green with embroidery elements on the left side. The white-red-white flag was considered anti-Soviet, however Belarusian political and cultural organizations abroad continued using it as the Belarusian national standard.

During the period of Nazi occupation (1941-1945) the white-red-white flag was allowed to be displayed alongside German flags and symbols. The Nazi occupation authorities allowed such steps to appease the Belarusian national movement and opponents of the communist regime.

Historian Vitaliy Skalsky explains that during WWII part of Belarus’ national movement risked cooperation with the Nazis because they considered this an opportunity for the revival of national statehood. The Belarusian partisan movement which was anti-Nazi and anti-communist also considered this flag as its national standard, although in actual fact, the movement had no possibility to determine the flag’s official status.

In September 1991 the Belarusian Supreme Soviet enacted a law on the Belarus state flag, making the white-red-white flag the official flag of Belarus, which it remained until 1995, when a referendum was held under the presidency of Alexander Lukashenko. One of the referendum questions was about adopting a new flag and coat of arms. According to official referendum results, 75.1% voted for the new flag, 20.5 percent did not support this initiative.