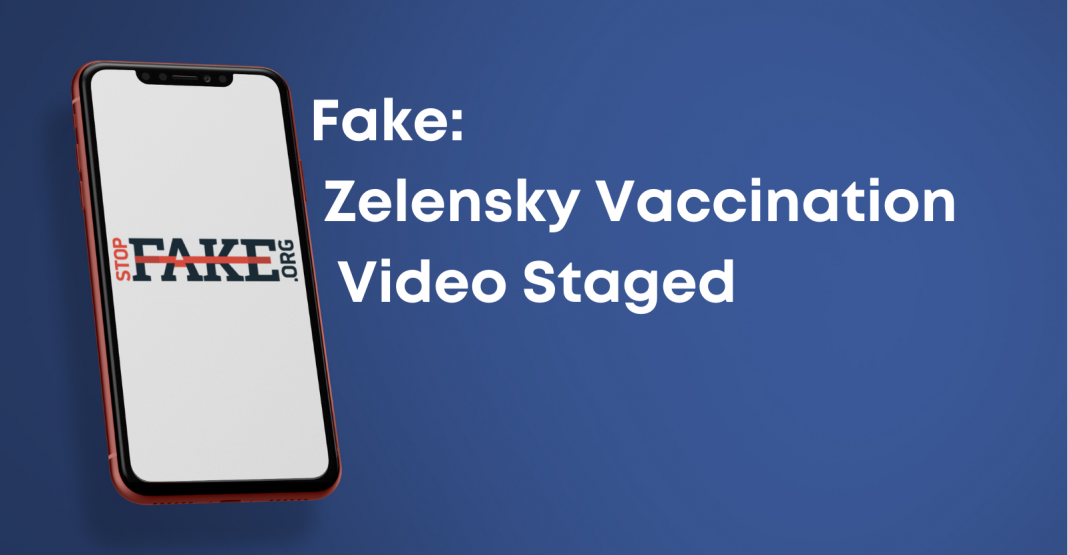 Ukrainian Facebook and many Russian publications were awash with stories claiming that the video showing Ukrainian President Volodymyr Zelensky receiving a COVID vaccination was staged. The so-called proof of the entire setup were the different colors of the needle base used to administer the jab.

The source for this fake claim is a video posted to YouTube by Aleksey Zhuravko, a former member of parliament from the defunct Regions Party of ousted Ukrainian President Viktor Yanukovych. (StopFake has debunked a previous fake Zhuravko circulated about alleged repressions against history teachers in Ukraine.) This time Zhuravko manipulated the video of Zelensky being vaccinated, leaving only 35 seconds of the original, which is longer than two minutes. Zhuravko claimed that because two needles figured in the video, one with a blue base and another with a violet, it is clear that “Zelensky deceived the Ukrainian people”.

Volodymyr Zelensky was vaccinated with the Covishield vaccine on March 2, 2021 at Mobile Military Hospital No. 59 in Luhansk province. The Presidential office put out a complete video of the vaccination process which media adapted to their use in newscasts. President Zelensky also informed about his vaccination on his official Facebook and Twitter accounts.

StopFake reached out to the President’s Office asking why two different needles were used during the vaccination process. According to the response we received from the Presidential Press Office (signed by Iryna Pobyedonostseva), as per guidance by the Health Ministry using two needles is standard protocol when administering the Covishield vaccine, one needle is used to draw the vaccine from the vial, another to administer the jab. Two needles are used for several reasons: the needle can lose its point while penetrating the vial seal thus making the jab more painful. The first needle can be contaminated or inadvertently touched, or it can carry tiny fragments of the vial’s rubber seal.

The President’s Office made the complete inoculation video available to StopFake, from which one can clearly see a medical worker using a blue based needle to draw the vaccine from the vial; she then changes the needle to one with a violet base with which the Ukrainian President is then vaccinated.