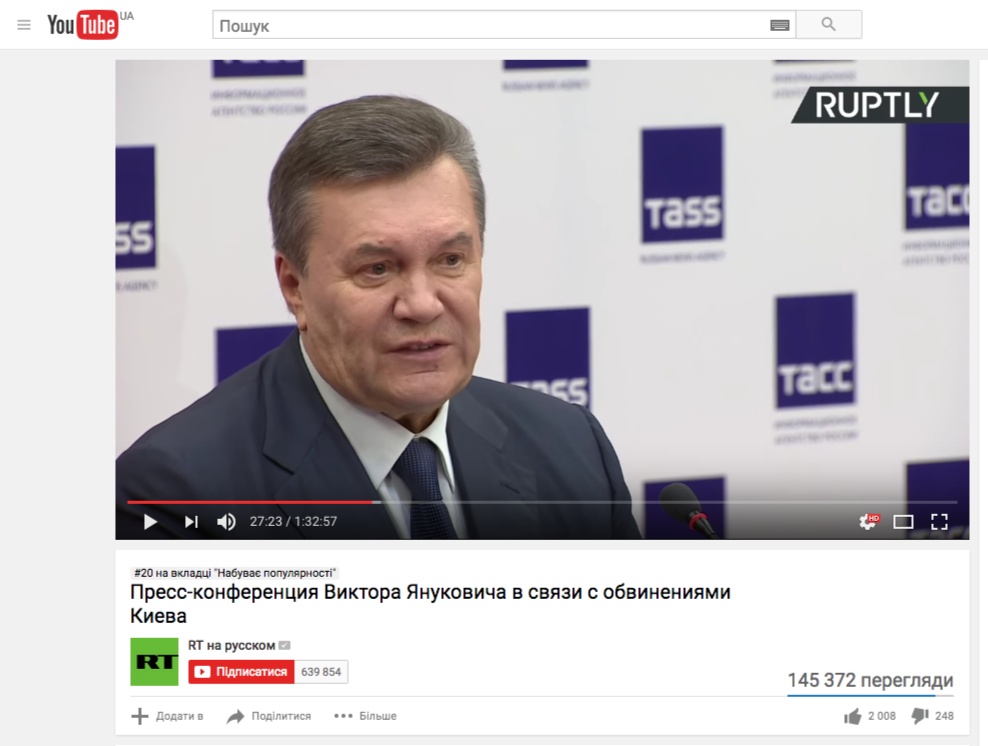 On November 25 former Ukrainian president Viktor Yanukovych was to be questioned by a Kyiv court via video link from Russia. The questioning was postponed and the ousted leader gave a press conference in the Russian city Rostov na Donu in which he. During the press conference Yanukovych stuck to Russia’s official script about the events that took place during the 2013-2014 Maydan revolution, claiming that a power grab had occurred in Ukraine, that the radicals who came to power are themselves responsible for the war in the east of the country, that soldiers don’t want to fight in the. Yanukovych also vehemently denied that he has any money and that he left the country with only “hand luggage”.

Yanukovych claims that during the 2014 Maydan protests, snipers fired both on the riot police and demonstrators from buildings which were controlled by the protesters.

According to the International Advisory Panel which investigated the Maydan violence, the responsibility for the majority of the killings that took place on February 20, 2014 rests on the Berkut riot police. By analyzing hundreds of hours of video and internet materials the Panel identified more than 20 Berkut police officers who shot at the protesters.

Yanukovych also denies that he left Ukraine with any money. “No money belonging to me has been found in any bank” he says ‘I did not take anything out of Ukraine aside from personal belongings, which I carried as hand luggage” he said.

What Yanukovych claims was hand luggage was, in fact several truckloads of paintings, swords, daggers, icons, vases and other antiques, which were ferried out of Kyiv over several days, the packing was caught on security cameras in Yanukovych’s residence.

Scores of Yanukovych’s bank accounts in Ukraine were frozen by authorities after Yanukovych. The Prosecutor General’s office has spoken of 127 million just in Ukraine.

Yanukovych also claimed that his automobile was fired upon (40:00 minute), which he said was in fact an armed insurrection. The Ukrainian Prosecutor’s office investigated the matter and found that there was no evidence of an assassination attempt on the former president.