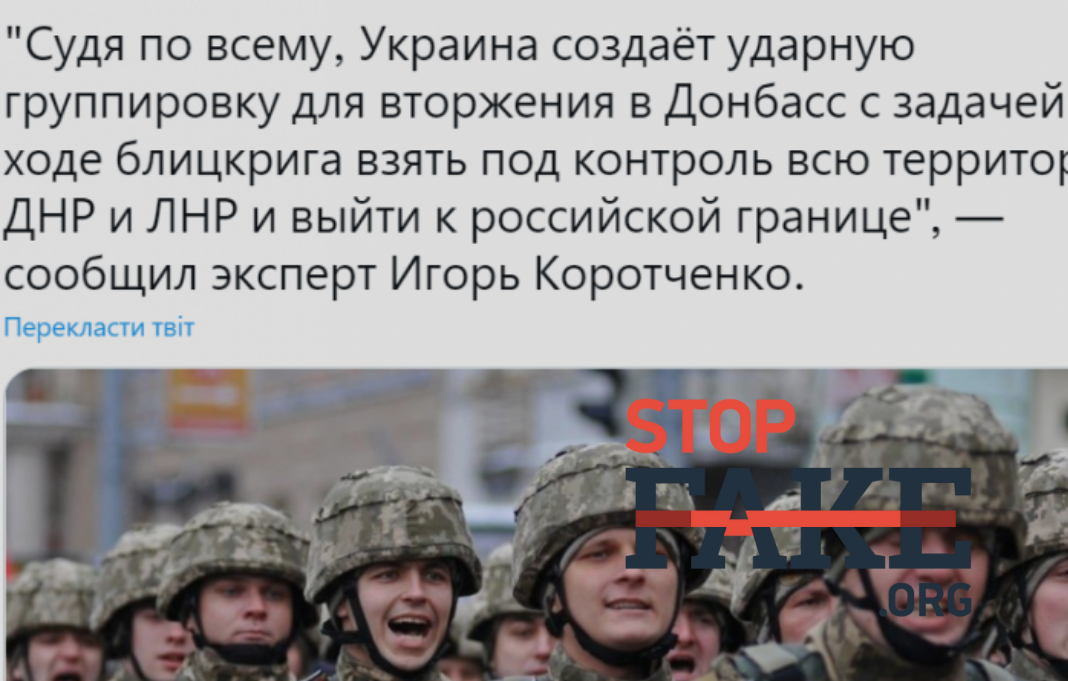 Citing intelligence from US and NATO allies, world media have regularly reported on the buildup of Russian troops and military equipment on the Ukrainian border since the end of October. At first Russia denied these reports, then accused the West of artificially creating hysteria, saying Russian troops were closer to Belarus and not on the border with Ukraine, and then turned the tables and accused Ukraine of preparing a full-scale war against the self-proclaimed people’s republics in eastern Donbas. Now Moscow not only no longer denies the troop buildup on the Ukrainian border but is also ready to use them.

Pro-Kremlin publications began pedaling the story about Kyiv’s alleged plans to wage war in Donbas after the Russian presidential spokesman Dmitry Peskov made a statement to that effect in mid-November.  Peskov said that Ukraine is looking for ways to try to resolve the situation in
Donbas by force. Referring to the war that Russia unleashed in Ukraine as “an internal Ukrainian conflict” Peskov said that any attempt at a military solution will become a “soul-wrenching spectacle that will have most serious consequences.”

“Ukraine is most likely seeking to attempt a military solution to its own problem, create another disaster for themselves and for everyone in Europe. This is what Ukraine is striving for” Peskov said.

The West not only “provokes” Russia, but also “incites” Kiev

Aggressive “anti-Russian propaganda”, “Russophobia”, “militarization of Ukraine”, numerous joint military exercises – this, according to Moscow, is how the West “incites” Kyiv against Russia.

“NATO countries should stop pumping Ukraine up with modern weapons, thereby inspiring Ukraine to act insanely” Peskov said. One day after these pronouncements on November 22 a statement published on the official Russian Foreign Intelligence Service website echoed Peskov, citing the “militarization” of Ukraine: “the US and its allies are pumping Ukraine full of weapons, encouraging the use of lethal weapons, including drones, in order to carry out military provocations”.

Russian propagandists have intensified the “militarization of Ukraine” narrative particularly since the end of October, when the Ukrainian military first used the Turkish made Bayraktar drone in the war zone.  Fake stories claiming Ukraine was using weapons prohibited by the Minks accords – tanks, Javelins and howitzers, etc. appeared in countless publications.

While guests on Russian talk shows wailed about the new impending cold war, top Russian officials began talking about how the United States was testing Russia’s patience and even provoking Moscow. The US is allegedly preparing to conduct unplanned large scale military exercises in Europe on purpose and is increasing its presence in the Black Sea. In a November 21 statement Dmitry Peskov suggests that Ukraine is planning a military scenario in Donbas, under the cover of NATO exercises with NATO ships in the Black Sea. Earlier Russian Foreign Ministry spokeswoman Maria Zakharova also warned about “10 NATO military deployment sites in Ukraine” and military centers being built to receive bombers from NATO countries.

“Ukraine is waging an offensive war”

On November 22, the Russian Foreign Intelligence Service issued a statement alleging that Kyiv was building up its “military groups” in the Donbas and “resuming shelling of civilian targets.” “There is information about the creeping advance of Ukrainian positions deep into the so-called gray zone along the demarcation line, as well as the concentration of Ukrainian Armed Forces and materiel in the border areas with Russia and Belarus,” the statement says.

Open intimidation followed. The Russian Foreign Intelligence Service noted the events of 2008, then Georgian President Mikheil Saakashvili, allegedly under the influence of the West, “broke free of his leash” and “tried to destroy the Russian peacekeepers and the civilian population of South Ossetia”. “This move cost him dearly” Russia’s Foreign Intelligence Service warns on the agency’s website.

A few days later, on November 25, Maria Zakharova announced that Ukrainian troops were advancing on Donbas.

“The reports of the special monitoring mission attest to the offensive actions of the Ukrainian Armed Forces in the area of the Hranitne and Staromariyivka settlements. According to observers, the Ukrainian military in this area have advanced their fortifications by at least one kilometer,” Zakharova said.

Russian propagandists regularly manipulate the OSCE Special Monitoring Mission reports. Zakharova’s pronouncement was no exception. In fact, there is no evidence whatsoever of Ukraine advancing its fortifications. An analysis of OSCE daily monitoring reports over the last two weeks shows that the situation in Hranitne and Staromariyivka is relatively calm, the hot spots are the town of Zolote and Petrovske. Replying to a StopFake inquiry, the Ukrainian Joint Forces Operations Press Office told us that the Ukrainian military are staying put and not advancing anywhere, acting within the framework of the Minsk accords.

Zakharova made another blustering statement on December 1 during her regularly scheduled Foreign Ministry briefing. She announced that Ukraine had deployed half of all its military personnel to the line of contact. “The Ukrainian Armed Forces are building up their military force, pulling together heavy equipment and personnel. According to some reports, the number of Ukrainian troops in the conflict zone has already reached 125,000 people. This is half of the entire composition of the Armed Forces of Ukraine” Zakharova declared.

The propaganda publication Avia.pro, in connection with Zakharova’s statement, wrote that “now the number of Ukrainian troops stationed in Donbas exceeds the combined forces of the Donetsk and Luhansk People’s Republics, as well as the Russian troops, according to the US, stationed at the Ukrainian borders, numbering 100 thousand.”  Various Russian talking heads and “experts” started claiming that an increased Ukrainian military presence  in Donbas indicates Ukrainian President Volodymyr Zelensky’s readiness to give the order to start the offensive.

“Kyiv is really preparing to fight, it is preparing to seize Donbas, using fighter aircraft, as well as infantry, which today are the most combat-ready units of Ukraine’s Armed Forces,” declared Olga Skabeeva, one of the Kremlin’s leading propagandists on her “60 minutes” show. The discussion on Vladimir Solovyov’s program follows the same scenario. In prime time, propagandists spend many hours discussing how Ukraine will start the war, or what kind of “serious provocation” Kyiv will orchestrate, thereby freeing Russia’s hands.

“By all accounts, Ukraine is creating a strike team whose mission is to invade Donbas and take control of the entire territory of the DPR and LPR during a blitzkrieg and reach the Russian border,” claims “expert” Igor Korotchenko.

“Our hands are finally untied” the propagandists declare, foreshadowing a new conflict. If earlier Russian propagandist messaging amounted to “the Kyiv security forces are fighting against the people of Donbas”, lately the message has morphed into “the Ukrainian military are killing Russian Federation citizens, and this cannot be tolerated”. Russia’s policy of giving out passports in the occupied territories could soon be paying dividends. According to Russian reports, more than 600,000 residents of the occupied territories, the self-proclaimed Donetsk and Luhansk People’s Republics, have received Russian passports. One can’t rule out that this factor may play a key role in justifying further Russian military aggression against Ukraine in the future.