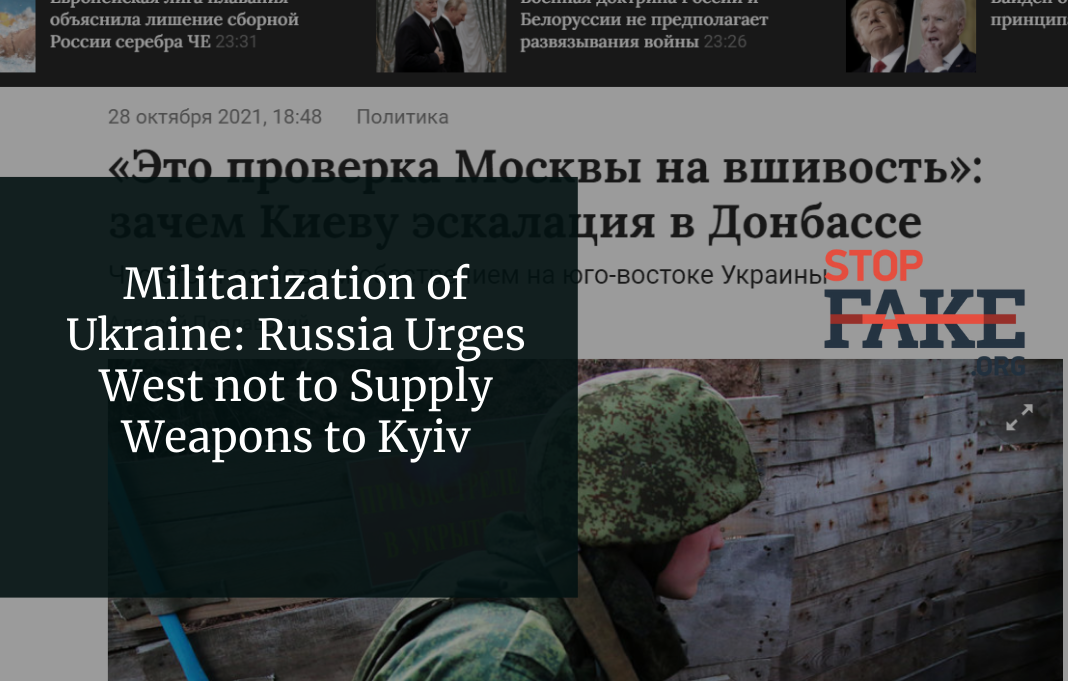 “Kyiv wants to withdraw from the Minsk agreements”, “Ukraine provokes a war with the republics”, “Kyiv crossed the red line, taking citizens of Russia hostage”, “The West deliberately arms Ukraine”, “This is all Russophobia” – this is just a short summary of Russian television messaging over the past week.  After Ukraine’s military used a Bayraktar drone and entered the Staromariyivka village in the gray zone, the so-called “militarization of Ukraine” became the Kremlin propagandists newest mantra.

StopFake has already informed our readers how Russian propagandist media reacted to Ukraine deploying a Turkish drone in Russian occupied eastern Ukraine to force Russian separatists to cease fire. Conspiracy theories, open mendacity and manipulation were part and parcel of that reaction.  Russian media portrayals of western reactions to Ukraine’s use of the drone deserve separate attention, as does the escalation of the situation in Russian occupied eastern Ukraine.

On October 26, the Ukrainian military for the first time used the Bayraktar drone in the conflict zone in eastern Ukraine.  The previous day Russian occupying troops fired at Ukraine’s positions in the area of the Hranitne, a town some 80 kilometers south of Donetsk, with a battery of D-30 howitzers, weapons prohibited by the Minsk agreements. A video posted by the Ukrainian Armed Forces shows militants deploying a battery right on the road. As a result of the attack from the Bayraktar, part of the enemy’s artillery system was destroyed.

Immediately Russian media and top Russian officials started accusing Ukraine of “deliberately provoking an escalation of the military conflict in eastern Ukraine” and the main culprit in this situation is the West, which is arming Ukraine, they claimed.

One of Russia’s leading propagandist political talk shows, the Kremlin funded 60 minutes program aired a live report by its correspondent from the gray zone between Ukraine and the occupied territories, who declared that the situation was “hanging by a thread from a full-fledged war”. Commenting on the alleged seizure of a town called Staromariyivka by the Ukrainian military, the correspondent announced that all the villagers were being held hostage. Notorious Kremlin propagandist Dmitry Kiselyov in prime time announced that Ukraine no longer knows how else to provoke Russia into the conflict, since the actions of the Ukrainian armed forces in Staromariyivvka are no longer directed only against Donbas residents, but also against the citizens of Russia. It turns out that 37 residents of the village received Russian passports, and some even voted in the recent Russian Duma elections.

The head of the self-proclaimed Donetsk People’s Republic Foreign Ministry Natalia Nikonorova believes that Kyiv is deliberately seeking to escalate the conflict in order to divert the attention of Ukrainians from the problems in the country. Another version from Gazeta.ru and Strana.ua why the Ukrainian military used the Bayraktar drone is that : “Kyiv is pushing for an escalation in Donbas in order to get Europe and the United States to block the Russian Nord Stream 2 gas pipeline, the launch of which could seriously reduce the need for gas transit through the territory of Ukraine. The Ukrainian authorities’ plan is quite simple: to provoke a tough Donbas response from Russia and try to disrupt the launch of the gas pipeline. “

“Kyiv has gone in for a great provocation in Donbas. It’s difficult for now to assess the consequences of this action, but it is clear that Ukraine in fact is rejecting the Minsk agreements in particular and a peaceful resolution in Donbas in general. America is encouraging this while Europe is frightened” Russia’s chief spin doctor Dmitri Kiselyov declared at the beginning of his show Vesti. “If you ply Ukraine with weapons, you need a plan. What is that plan?” Kiselyov asked menacingly.

Russian media completely echoed official Russian statements. Foreign Ministry spokeswoman Maria Zakharova announced that Ukraine is intentionally pushing the negotiation process into a dead end so as to free its hands to return Donbas by military means.  According to Zakharova, Kyiv’s confidence in a military solution is stoked by what she calls the “continuous supply of weapons and ammunition by Western countries, the deployment of military training missions and NATO joint exercises”.

“We call on the Western capitals, which are pumping weapons into Ukraine – Washington, Berlin and Paris, as participants in the Normandy format, to stop encouraging the militarization of the country and use their influence to return Kiev to the path of achieving lasting peace in Donbas by political and diplomatic means” Zakharova declared.

Appearing on the the 60 Minutes program on October 31, Russian Presidential spokesman Dmitry Peskov also expressed concern over the issue of arms supplies to Ukraine. “Our fears that the supply of such types of weapons to Ukraine’s military can potentially destabilize the situation on the line of contact are being confirmed. We see that as soon as such weapons fall into the hands of the military, they can potentially use them in this region of Ukraine, and this only leads to destabilization, and not to the settlement of this Ukrainian problem,” Peskov said.

Even before the official position of Western countries regarding Ukraine’s drone was made public, Russian media began spreading stories about alleged British condemnation of such use and American threats regarding Russia’s wrath. Russian media used one of its favorite techniques in this regard, portraying two comments in a newspaper, the commentator’s real identity hidden behind  the JonO and Rudolphucker 1959 handles, as the official British position.  RIA Novosti, portrayed the position of one JonO and Rudolphucker1959, who left comments in the British newspaper Daily Express as the official British view. REN TV represented a publication in the Kremlin friendly publication The National Interest as the official US position. Russian media often use National Interest publications as examples of alleged western positions on various issues.

The position of France and Germany, countries participating in the Normandy format, is approximately the same. On October 28, the French Foreign Ministry announced that they were “concerned about the increase in the intensity of hostilities in eastern Ukraine, and about Ukraine’s use of the Bayraktar drone.” These events contradict the measures to strengthen the ceasefire, which came into force on July 27, 2020,” the statement said.

Earlier, a similar statement was made by German Foreign Ministry spokeswoman Andrea Sasse. “Berlin is very concerned about the increase in the intensity of hostilities in the east of Ukraine, as well as the message of the General Staff of the Ukrainian army, according to which the Ukrainian Armed Forces, in response to shelling and the death of one soldier and wounding of another, used a Bayraktar-type drone,” Sasse said.

If the position of France and Germany remained practically unnoticed in the Russian media, the US statement threw the Russian propaganda machine into near apoplexy. The US Embassy in Ukraine said that it was not Ukraine, but Russia’s actions that were exacerbating the situation in the “gray zone”.

“We urge both sides in the Donbas conflict to abide by the terms of the ceasefire agreement, but let’s be clear — The Russia-led side has repeatedly deployed howitzer artillery and drones against Ukrainian forces, in direct violation of the enhanced measures agreed last year and recently killed a Ukrainian soldier.  Official Russian rhetoric suggesting Ukraine is aggravating the situation is not only misleading, it serves to escalate tensions.” the US Embassy in Ukraine tweeted on October 29.

Regarding the Russian troop buildup on the Ukrainian border, Igor Korotchenko, editor-in-chief of the National Defense magazine, a guest on the 60 Minutes program, said that the troop accumulation is a “serious signal to Ukraine,” and not from Russia, but from the United States. “Zelensky was warned:  you kiddo, slow down in Donbass, God forbid you cross the red line, then they will cross over you.’ This is a warning from the West not to Russia, but to Ukraine, ” Korotchenko  assures.

Russian state Channel One released a special two-hour edition of Vremya Pokazhet (Time Will Show) about whether Kyiv is ready for war. The “sharp” studio discussion hid several prevailing themes:

After the release of aerial images showing the Russian military buildup close to the Ukrainian border, on November 2, Russian presidential spokesman Dmitry Peskov, issued a statement, calling the US stories “substandard plants.” “You saw it yourself, they talk about the border with Ukraine, but they show the border with Belarus,” he said. “Russia has never threatened anyone, does not threaten and does not pose a threat to anyone.”

The Vremya Pokazhet program also discussed the possibility of a large-scale war with many participants, including Turkey. “Right now you (the West – ed.), indulging thev, not pushing them away from the use of drones, are actually condoning Turkey’s entry into Ukraine, you are aggravating this situation. And this blood will be on your hands. If someone wanted to send a signal to Ukraine tomorrow, American and European colleagues, they would cut off the funding, and that would be the end of it” a studio guest argued.

The meeting between the Turkish and Russian Foreign Ministers Mevlüt Çavuşoğlu and Sergey Lavrov also spawned copious fakes and manipulations. Ukrainian and Russian media disseminated stories claiming that the Turkish Foreign Ministry is demanding that Kyiv stop using the name Bayraktar. However, this claim is completely false. The media have significantly distorted the words of the Turkish Foreign Minister, who said the following: “Sometimes, when fighting terrorism in different countries, we come across weapons from different countries, including Russian weapons. However, we don’t blame Russia. Ukraine should not use our name either,” Çavuşoğlu said, meaning that if a country buys weapons from Turkey, then the responsibility for the use of these weapons lies only with that country. Ukrainian journalist Osman Pashayev also drew attention to the fact that Çavuşoğlu actually compared the actions of Ukraine with the fight against terrorism, and not with the war.

“Even now agreements between Moscow and Ankara are being carried out to never again sell armaments to you heathens, because you have little self-control. This is an official statement by the Turkish Foreign Minister” 60 Minutes co-anchor Olga Skabeeva declared on air. Minister Çavuşoğlu however, never said any such thing.

While Russia drones on that supplying Ukraine with weapons is escalating the conflict, the United States is convinced that this is an opportunity for Kyiv to insure its own defense. In late October, US Assistant Secretary of Defense for International Security Dr. Laura Cooper called on allies to lift restrictions on the supply of lethal weapons to Ukraine. “We have a number of allies that have these restrictions – some of them are related to their defense assistance programs, but some also have sales restrictions. I believe that Ukraine should be able to buy what it needs for its own protection, ”Cooper said.

In addition to scaring its readers and viewers with the myth of a militarily armed Ukraine provoking conflicts in the Donbas area, Russian propagandists also predict that the arms sold to Ukraine will eventually end up on the European black market. “Ukraine’s security does not bother anyone, because it is not provided with weapons of this type. America is creating chaos, and these supplies are needed to consolidate it,” says Russian political analyst Alexander Asafov, speaking of a new “cold war” between Russia and the United States.