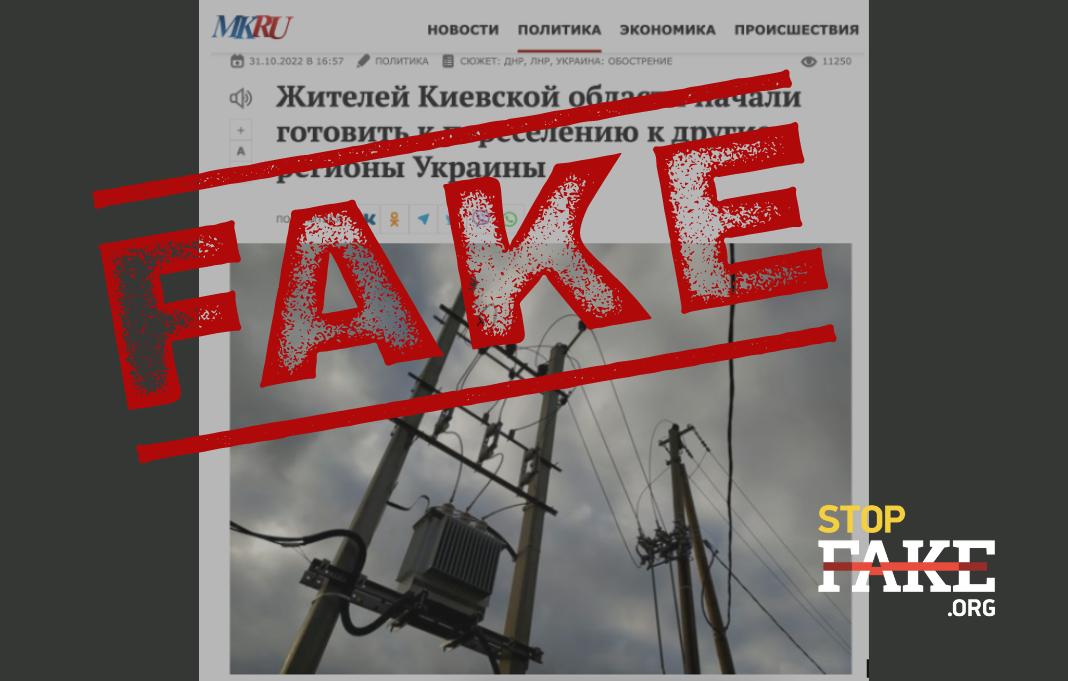 The Kyiv regional military administration chairman has not said that residents of the region will be relocated to other areas this winter. This is merely one of the possible options, provided that all other plans to deal with the crisis are exhausted.

Social media users and Russian media are disseminating claims that Kyiv region residents are to be resettled to other Ukrainian regions because of the “expected” energy supply disaster. Some media write that Kyiv Regional Military Administration chief Oleksiy Kulebaon made such a statement.

In reality, the information about Kyiv region residents being resettled is yet another manipulation by propagandists. We explain why.

On October 29, in an interview with the Polish publication Onet, tKyiv regional military administration chief Oleksiy Kuleba announced that the authorities are currently developing various responses to possible military threats, including damage to the region’s critical infrastructure this winter. In particular work is currently underway to open 754 heating points equipped with autonomous heating. “These are administrative buildings, such as schools, kindergartens. We have already created an interactive map where people can quickly see where the nearest heating point is. Everyone will be able to stock up on warm things and food, as well as charge mobile phones. There you will be able to wait out the moments of crisis,” said Kuleba.

The Kyiv regional chief emphasized that the region is preparing “for all options” of the crisis and noted a worst case scenario plan in case “the infrastructure is so damaged that we won’t be able to repair it quickly.” is being developed. In this case, the authorities have a plan for temporarily transporting people to regions with a more stable energy infrastructure situation.

Kuleba was talking about only one possible scenario, provided that all other possibilities for dealing with the crisis are exhausted. He did not say that Kyiv region residents will be resettled this winter.

In an interview for Ukrainian Hromadske broadcaster, Oleksiy Kuleba once again noted that “the regional military administration is preparing for every possible development, including the most difficult ones.” However, currently it is impossible to predict probable damage to Ukraine’s energy infrastructure as a result of enemy actions and plan the timing of repair works. He also advised everyone to stock up on food and water and charge their mobile phones.

On October 31 Oleksiy Kuleba announced on his official Telegram channel that no evacuation measures are planned in the near future.

“Kyiv region evacuation measures are not taking place, nor are they planned in the near future. The situation with the energy sector is difficult, but under control, — Kuleba wrote, — Everyone is doing their job. Electricity in the region is already being restored. Kyiv region residents will be advised about allplans in advance.”