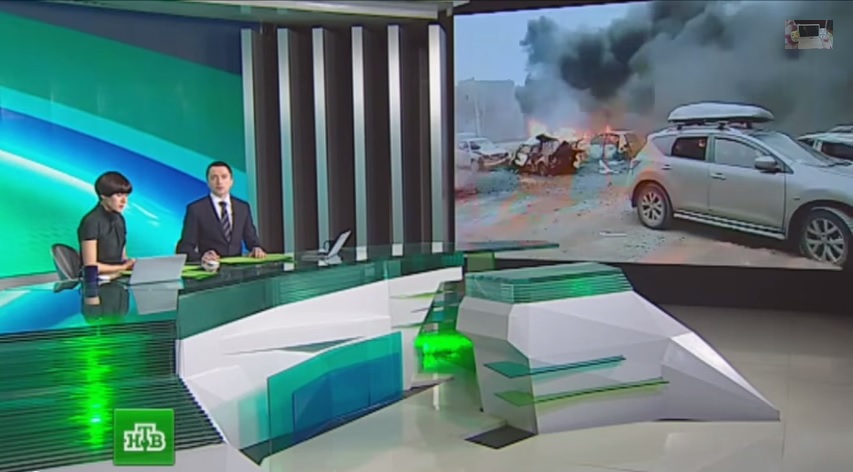 January 26, the Russian TV channel NTV demonstrated in its news program Segodnia (eng. – “Today”) a news item about shelling of Donetsk by the Ukrainian Army.

“The situation on the south-east of Ukraine continues to be difficult. Militia men claim that Ukrainian forces drew up about 30 tanks to the town of Avdiivka – it is situated to the north from Donetsk – and forbade the locals to abandon this town. It is also reported about constant shelling of the capital of Donbas. Several districts of the city, including one of the biggest coal mines, were attacked”, told the newscasters before the start of the news item.

Meanwhile, in order to dramatize situation fires and destruction are demonstrated on the screen to the right of the newscasters.

However, this video is not from Avdiivka or Donetsk, but from Mariupol that was shelled by pro-Russian separatists on January 24. We can understand this from the first seconds of the video by comparing it with other two videos filmed on January 24 in Mariupol by eyewitnesses and journalists. We can clearly see several locations that help us to determine the date and time of the event.

The video of “Radio Svoboda”:

The amateur video of an eyewitness:

For example, on the first seconds of the NTV video we can see a yellow sign “Шиномонтаж” (eng. – “Tire fitting shop”) and a fire behind a fence. The same sign we can notice from the 27th second of the “Radio Svoboda” video and from the 35th second of the video of an eyewitness.

On the 5th second – the image of a parking place with destroyed and burning cars. We can see it on the 12th second of the amateur video.

Starting from the 8th second a metal grey fence, a man dressed in black with his back to a cameraman and an ambulance near an entrance of an apartment building appear in the NTV video. This image can be also found in the amateur video starting from 1:37.