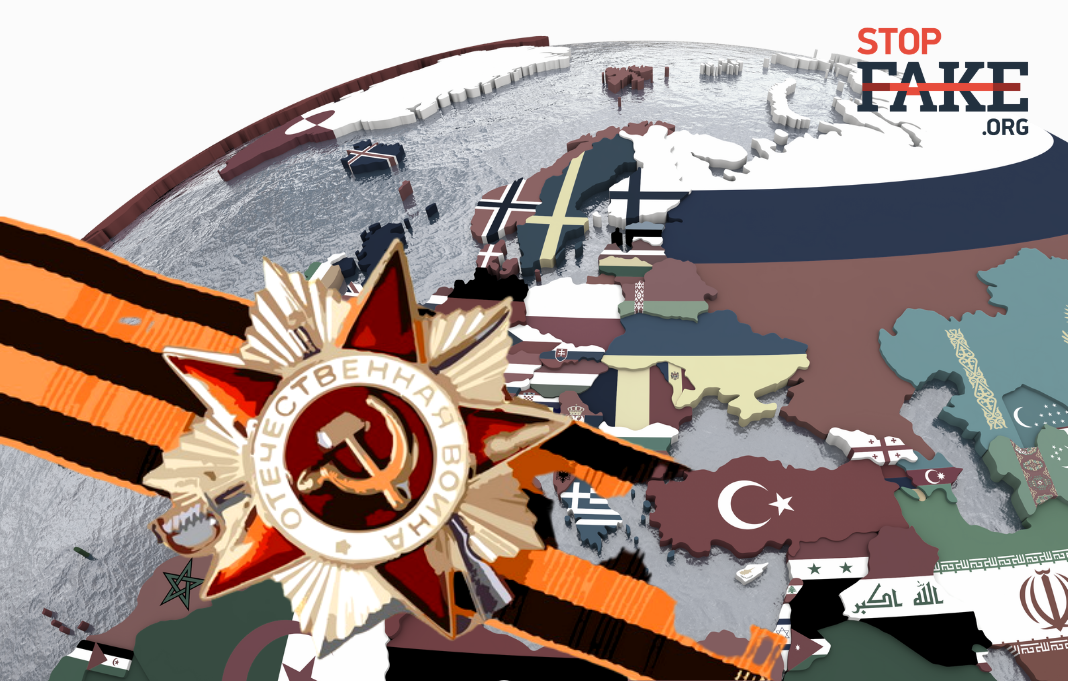 May 9 – Victory Day – “the Soviet people’s victory in the Great Patriotic War 1941-1945” was never simply a commemorative holiday, it has always been an important ideological instrument. From its inception, this holiday has been a deep and profound manifestation of state propaganda. However, the kind of metamorphosis regarding World War II that has taken place in today’s Russia, could not have been foreseen even by Stalin.

There is probably no topic that is more challenging for factcheckers than the manipulation and fakes stemming from the May 9 Soviet holiday.

The unconditional surrender of Germany was signed on May 7, 1945 in Rheims, France at the Supreme Headquarter of the Allied Expeditionary Force (SHAEF) and came into force on May 8, 1945 at 23:01 Central European Time.

General Alfred Jodl, the Chief of Staff of the German Army signed the surrender papers on behalf of Germany, having been authorized to so by Admiral Karl Dönitz, whom Hitler had named as his successor as president of the Reich, minister of war, and supreme commander of the armed forces.

Stalin however wanted more and refused to acknowledge the May 7 signed Instrument of Surrender and demanded that the capitulation document be signed on a higher representative level and in the very capital of the Third Reich, Berlin. The Soviet position was that Nazi Germany’s capitulation should not simply be an historic event, but an occasion which would reflect the leading contribution of the Soviet people to the Allied victory, whereas the Rheims document, in Moscow’s view, placed the Allies at the forefront of victory. Germany’s surrender should be signed by the highest ranking Soviet military leader, thus demonstrating the Soviet Union’s victory first and foremost.

The US, Great Britan and the USSR agreed to consider the Rheims surrender as preliminary. Stalin persuaded the Allies to wait with official end of war announcements and agree to an information blockade. The US and Great Britain agreed not to publicize the Reims signing for 36 hours and conduct a second surrender ceremony in Berlin.

The official German surrender announcements came as agreed, but unofficially, the world already began hearing of the end of the war on May 7.

The German people found out about their defeat and the war’s end on May 7, when Reichsminister Lutz Graf Schwerin von Krosigk announced the surrender on German radio.

The news the world was waiting for began spreading across the globe after AP correspondent Edward Kennedy, one of 17 journalists invited to witness the Rheims signing ceremony, reported the story. While the western press corps was bound to a 24-hour news embargo about the surrender, Kennedy, upon hearing that German radio was announcing the surrender already on May 7, defied the military’s embargo command and filed the story. “The absurdity of attempting to bottle up news of such magnitude was too apparent,” Kennedy later wrote. For this, the Associated Press first rebuked him and later fired him.

60 years later, in 2012 AP apologized for firing Kennedy and announced that he had acted properly.

“It was a terrible day for the AP. It was handled in the worst possible way,” said president and CEO Tom Curley, noting that Kennedy should have been commended and not fired. “Once the war is over, you can’t hold back information like that. The world needed to know” Curley said.

On May 8, 1945, a second document on German capitulation was signed in an officer’s mess in Karlshorst, a suburb of eastern Berlin. Field Marshal Wilhelm Keitel, the supreme commander of all German forces signed on behalf of Germany, together with Luftwaffe chief Generaloberst Hans-Jürgen Stumpff, and German Navy admiral Hans-Georg von Friedeburg.

On behalf of the Allies the document was signed by Soviet Marshal Georgy Zhukov and Allied Deputy Supreme Commander Royal Air Force Marshal Arthur Tedder. The document was witnessed by US General Carl. A. Spaatz and the French representative General Jean de Lattre de Tassigny.

For all practical purposes, the Berlin document simply reiterated the points of the document signed in Rheims. Paragraph 2 of the Berlin document which outlined the requirements for the German army surrender were expanded and worded more severely. But the main agreement remained unchanged, and came into force on May 8, 1945, at 23:01 Central European Time, reaffirming that which was signed in Rheims a day earlier.

The second surrender ceremony in Berlin took place on May 8, 1945, at 10:43 pm Central European Time.  While it was still May 8 in Berlin, in Moscow, which is in a different time zone, May 9 had already begun.

This is an important detail. The Soviet leadership not only considered the second surrender ceremony with the participation of Marshal Zhukov to be the only legitimate one, but it was also of paramount importance to Moscow to show that both the signing and the coming into force of the surrender agreement was happening strictly according to Moscow’s rules, that in the capital of the Third Reich now controlled by the Red Army, Moscow time was in force. This was not a technical, but an ideological detail.

The changing of time was explained as follows: “Germans immediately changed the time in the occupied territories by introducing Berlin time. Life in occupied Paris, Minsk and Kyiv flowed according to time synchronized with the clocks of Hitler’s Germany. For Hitler it was convenient to attack and rule according to Berlin time.  When our soldiers entered the German capital, Berlin time ceased to be. In every sense, literally and figuratively, historically, and symbolically”.

Celebrating Victory Day on May 9 serves two purposes, bothfi vitally important to Soviet mythmaking. First, it demonstrates that the Berlin signing of the German surrender with the participation of the Soviet Union’s chief military leader was the more important ceremony, and second, it shows that as of May 9, the former capital of the Third Reich lived on Moscow’s time, thereby securing the Soviet Union’s role as the main victor of the war with Hitler’s Germany.

Manipulating the actual date of the end of World War II and Germany’s ultimate surrender is not the only example of Kremlin propagandists molding the history of the “Soviet people’s victory in the Great Patriotic War”.

For example, we now know that the classic photograph of Red Army soldiers raising the Soviet flag over the German Reichstag was in fact staged by the photographer Yevgeny Khaldei.

Mikhail Yegorov and Meliton Kantaria were not the only ones and not the first ones of many Red Army soldiers to hoist the red banner over the German parliament building. And the flag itself was not the only one that was raised, according to eyewitnesses, the Reichstag was hung with many red Soviet flags and not all of them looked like the victory flag in the iconic Khaldei photograph.

Firstly, verifying all the facts related to the events of May 1945 is a very thankless task. It is difficult to fight fakes in any war, and even more so one that took place 77 years ago.

Secondly, all human history has a tendency to mythologize with time. Myths are more popular that real fact-based stories. Mythological victors become larger than life, more fascinating and compelling than real heroes. Legends begin to look more likely than events that actually transpired…

But the problem today is not the factual nonsense or propagandist impressions in people’s perceptions of May 9, but rather the fact that the manipulation of a 77-year-old victory date and Soviet propaganda fakes have proven to be handy fodder for a new armed conflict in Europe. The myth of the single victor over fascism materialized into victory flags adorning Russian tanks as they invaded Ukraine, victory flags hung on houses occupied by invading Russian troops, with former allies in the anti-Hitler coalition suddenly becoming “enemies” because it was “only the USSR that defeated Hitler”.

As World War II finally came to an end in May 1945, no one could have imagined that entire political and technological concepts and geopolitical theories would spring from the foundations of ancient fakes and propaganda constructs and become the basis for a new war in Europe. But that is precisely what has happened.