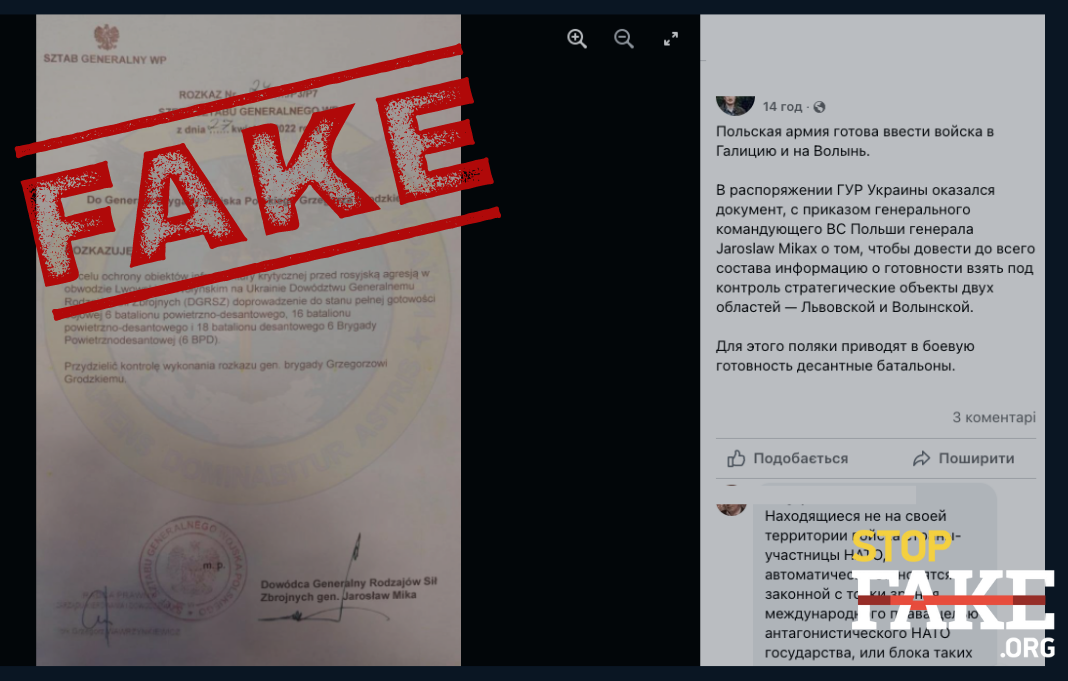 Ukraine’s intelligence services never published any such document. The “order” is a fake. Poland’s Armed Forces High Command confirms this is a fake, as does a detailed analysis of the document image.

A fake document purporting to be an order issued by a Polish general is actively being disseminated online. The order signed by a General Yaroslaw Mika states that Polish troops must be put on high combat readiness so they can take over strategic targets in two Ukrainian regions, Lviv and Volyn. “The Polish Army is ready to send troops to Galicia and Volyn. To do this, the Poles put their airborne battalions on alert” write social media users.

Facebook accounts claim this document was published by the Ukrainian Intelligence Services Main Directorate, as allegedly evidenced by a Ukrainian intelligence service watermark.

The Ukrainian Intelligence Services Main Directorate never published such a document. The “order” is a fake.

Poland’s General Staff denied the authenticity of this document after the Open Source Intelligence Monitor OSINTdefender, an account with more than 156,000 followers, published the order on their Twitter feed on May 3. Subsequent OSINT tweets question the veracity of the order, pointing out suspicious details in the document.

Poland’s General Staff tweeted: We noticed this document on a few Twitter accounts. This is a false order of the Polish General Staff. The whole document is FAKE. We observe more and more such counterfeit military documents in Polish spread by mass media. DO NOT share this FAKE NEWS!!

The Foto  Forensics photo validation tool shows that the image shared online has been altered.

Other details on this order also indicate that it is a fake. The order is addressed to Brigadier General Grzegorz Grodski. According to Polish media, General Grodski was transferred into the reserves in early April and no longer serves as commander of the 6th Airborne Brigade.