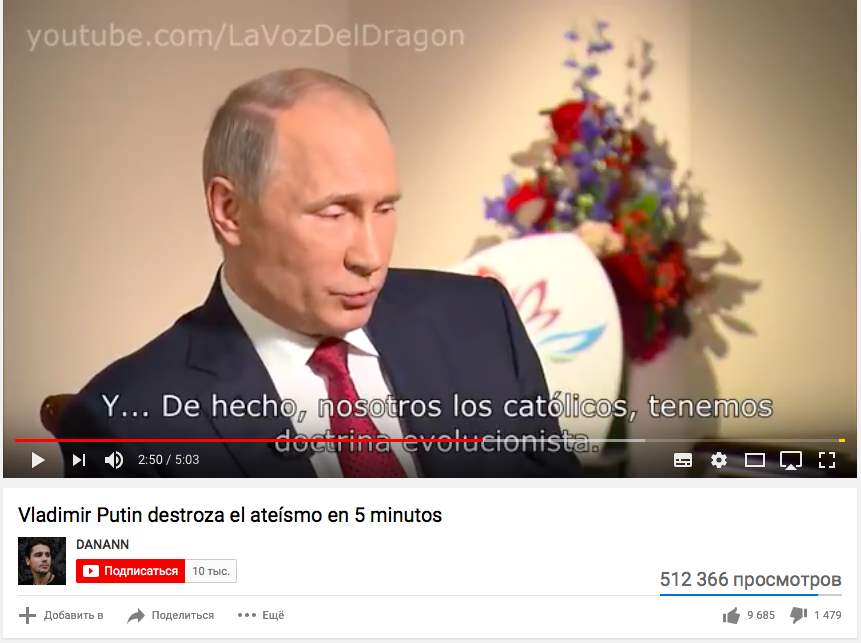 Putin shatters atheism in five minutes, a video that Argentinian singer and actor Emmanuel Danann published on his YouTube channel  on August 18 has been viewed by more than half a million people. The video has become popular on Facebook, Twitter and WhatsApp, painting a picture of the Russian president as a committed Christian who speaks out against atheism.

But the video is a complete misrepresentation and in it, Putin is not speaking out against atheism.  Anyone with a smattering of Russian realizes from the very first words that Putin is in fact talking about economic investment.  But the Spanish subtitles on the video tell a different story: “Atheism, by definition is a denial of the existence of the one whom we call God” they proclaim. A bit further in the video the subtitles read “we Catholics”. Russia is an orthodox country and has never been Catholic. It was however officially atheist during the Soviet period. This manipulated video clearly has been taken seriously by thousands and has generated a surprisingly large number of positive comments and discussions on social media among Spanish speakers, despite the fact that Putin is not speaking about God at all, but about an economic forum taking place in Russia. Those who shared this video present Putin as a faithful Christian leader who defends the foundations of his faith. Putin does position himself as an orthodox Christian. He was however a KGB officer and scientific atheism was a legitimate subject in higher education curricula and required mantra for Soviet civil servants. Christian beliefs were frowned upon and many were persecuted for their faith under Soviet rule.

RTAlternativa, a site that debunks Russia Today and other Kremlin generated fakes deconstructed this manipulated video, however, setting the record straight did not generate nearly as much interest as the fake video itself. Emmanuel Danann explains that the video was meant to be a provocative farce, he says he knows the subtitles are different from what Putin actually says, his intent was to “use Putin’s face in order to raise provocative topics within the framework of political correctness and cultural neo-Marxism.

Dannan admits that the subtitles on his videos do not reflect what Putin is actually saying, he calls these videos parodies meant to entertain. While Danann’s real explanation drew only eight thousand clicks his parodies elicit views in the hundreds of thousands.