When asked what advice would he give his grandchildren, Russian president Vladimir Putin responded with an answer that is uncharacteristic for a former KGB officer who has a history of magnificent mendacity behind him. Don’t lie, Putin said.  While his advice for grandchildren might have a ring of honesty to it, everything that the Russian ruler said about Ukraine followed the well-known script of untruth we are all too familiar with, Ukrainians and Russians are one people, the Ukrainian government is incapable of governing, the war in eastern Ukraine is not of Russia’s making and so forth. StopFake prepared an overview of Putin’s comments on Ukraine. 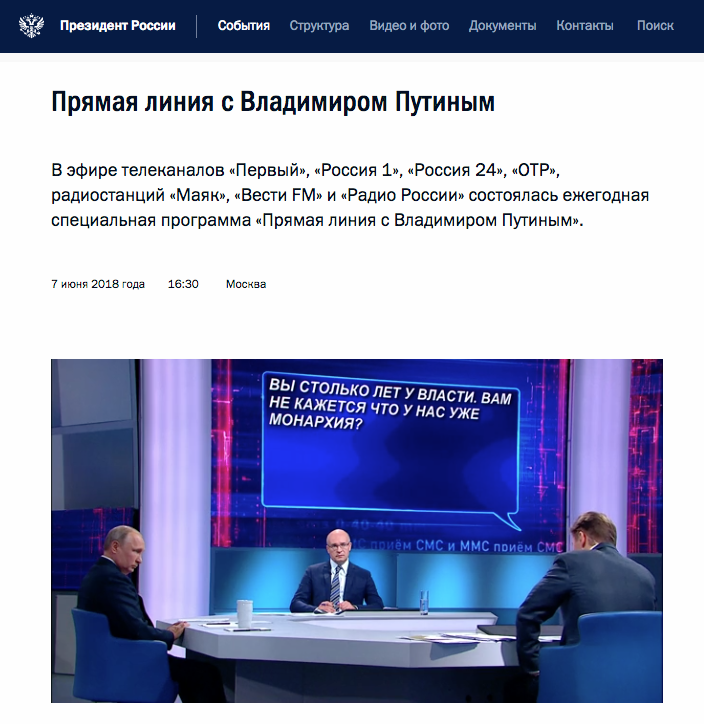 Sanctions against Russia is a favorite topic during Putin’s marathon television sessions. While the Russian president happily criticizes the sanctions as an attempt to bring Russia to her knees, he never mentions why the sanctions were instituted in the first place. But then no one actually asks him that either.

As expected, Putin followed the script on sanctions. This is a way of holding Russia back he said, because they see a threat in Russia, they see that Russia is becoming their competitor. Putin goes on to say what pro-Kremlin media parrots almost daily, that increasingly more and more voices abroad are calling for normal relations with Russia. All this will end when our partners realize that their methods are ineffective, counterproductive, and harmful for everyone, Putin said and warned that everyone will have to reckon with the interests of the Russian Federation.

Russian writer and one of the so-called Donetsk People’s Republic military commanders Zakhar Prilepin actively participated in fake news creation by telling Putin about rumors circulating in Donbas that Ukraine would launch an offensive during the 2018 World Cup being held in Russia.

“I hope that such provocations will not come to pass. But if this happens, I think that it will have very serious consequences for Ukrainian statehood as a whole” Putin said threateningly. He did not elaborate as to what those consequences might be but added that he does not expect an offensive and anyway, people who live in the Donbas cannot be intimidated. He then reassured the two self-proclaimed separatist enclaves that Russia would continue to have their back: “we render assistance to both unrecognized republics and we will continue to do that”.

Ukraine can’t solve the problems of the Donetsk and Luhansk People’s Republics, Putin posited, because Ukraine does not need the voters who live here. It’s clear they would never vote for this government. Then he went on to babble about how Ukraine is constantly shelling civilians, how the OSCE regularly registers these violations. StopFake also regularly debunks these claims.

In this year’s Direct Line, Vladimir Putin did not forget the obligatory reference to Ukraine as a “fraternal nation”. He reminded us that for him Ukraine is a “brotherly country” and that he considers Ukrainians and Russians practically one people.  Answering a question from Donetsk emigres who settled in Russia but are having difficulties formalizing their status and working there legally and asked Putin to help with the process the Russian president said: We have a common past, and I am convinced, regardless of any of today’s tragedies, we have a common future”.

Putin further explained that he is interested in the return of ‘compatriots’ because the birth rate in Russia is declining rapidly. Russia is interested in people regardless of nationalities and religious affiliation, Putin announced but clarified that “primarily we are talking about people who consider themselves to be closely connected to the Russian world, who know the Russian language, who have the right qualifications and want to work in our country”. Then in the tried and true Soviet tradition of problem solving, he gave instructions to some flunky to solve the Donbas emigres’ problems.

Crimea had a place of honor in this year’s Direct Line with Vladimir Putin. Not quite Crimea directly but rather the main construction project of the Russian Federation, the Crimea bridge, across which traffic is growing daily. Local Crimea residents meanwhile asked Putin if they would get roads as good as their new bridge.

A female journalist piped in during the broadcast to assure Putin that there are more tourists in Kerch thanks to the newly constructed bridge, more tourists and more cars because people know that new roads will be built for them. This ever growing number of tourists flocking to Crimea is a regular Russian propaganda trope, that StopFake debunks regularly.

Crimea residents thanked Putin for the bridge, calling it a “grandiose, graceful construction”, “a dream come true” but they also asked why prices on the peninsula are so high. Putin had a ready answer for that as well, once truck traffic is launched across the Kerch strait bridge, prices in Crimea will stabilize and be on par with prices in nearby Russian regions.

Vladimir Putin also devoted his attention to the staged death of Russian journalist Arkadiy Babchenko by Ukraine’s Security Service and the list of 47 people who are the alleged targets of the Russian security service. Putin called the operation a provocation that has already been condemned by international journalists’ organization. “Any staging is always counterproductive, no matter what its justification” Putin said and added that all journalists’ safety must be ensured, journalists should not be pressured and citizens should have access to free information.