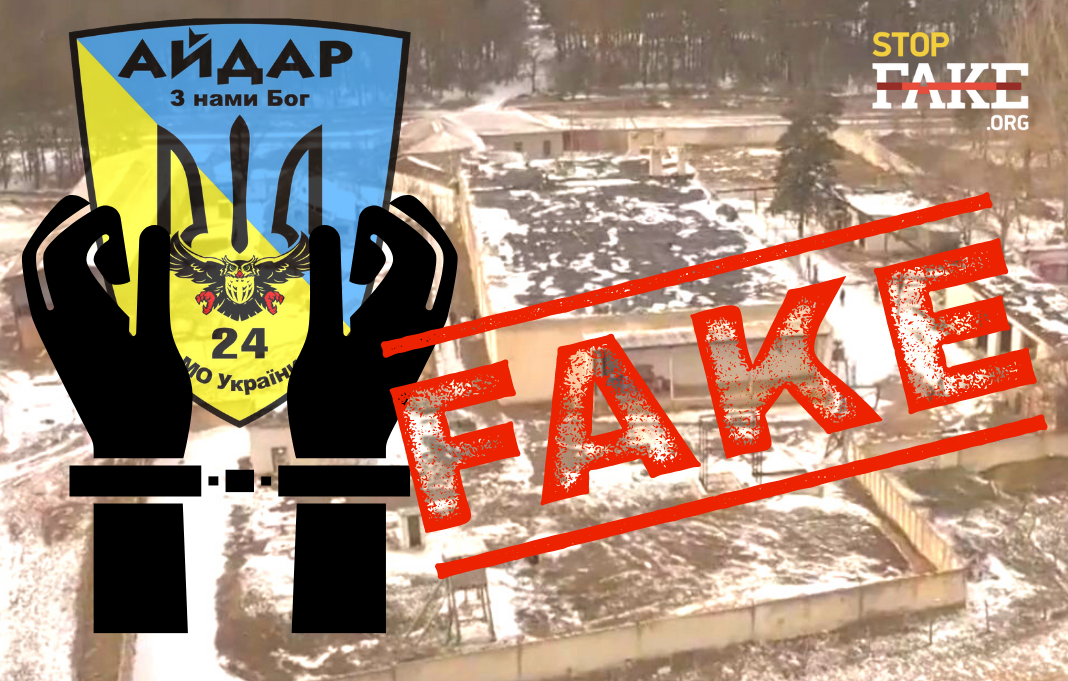 A series of reports by RT, RIA Novosti, Izvestia, Regnum, Ren TV and others about a “concentration camp” that the Ukrainian Aidar battalion allegedly operated for eight years in the village of Polovinkino in the Luhansk region, is being disseminated on the Internet. Numerous pro-Kremlin Telegram channels also write about this, citing sources in the so-called Luhansk People’s Republic People’s Militia. The reporters talk about the “horrors that happened in the Aidar concentration camp”, but at the same time, they only show footage of an abandoned factory location without any additional evidence. The reader does indeed see an abandoned base, but there are no traces of blood, human remains, or even torture devices – nothing that can be associated with a concentration camp. The space doesn’t even look like a training base, some burned metal beds are the only thing suggesting that the space may have been something other than industrial. These stories are yet another example of staged productions intended to make the viewer believe in the myth of “Ukrainian Nazis,” who torment the Donbas population. We explain why the stories about the “concentration camp” in Polovinkino cannot be true.

The Aidar battalion guards the outskirts of Ukraine controlled territory from Russian armed forces and local gangs in the Luhansk region. Since June 19, 2014, the battalion has been based in the village of Polovinkino, not far from regional center Starobilsk, some 100 kilometers northwest of Luhansk. The presence of the Aidar base in the village has always been known, reputable publications such as Ukrainska Pravda (2014), BBC (2015), Zerkalo Tyzhnia (2017) all wrote about it. As early as June 15, 2014, Ukrainian film crews went to the village of Polovinkino. This also confirms that the training base is indeed located there.

“On the base in Polovinkino, near the Starobilsk, it is getting dark. Three dogs are running around in the yard. Zamok and Buddy belonged deceased fighters of Aidar. In total the battalion lost 13 of its volunteers in the battle.”

Aidar base in the village of Polovinkino. Here its members live in the tents, which are marked with…”

The fact that Russian propagandists are filming stories at the Aidar base after Russian troops occupied Polovinkino is indicated by a number of visual matches with news stories filmed on the base earlier by Ukrainian media. Firstly, the main entrance gate to the training camp was shown by Hromadske TV in 2014. With slight changes, it is also featured in RT propagandist stories and thev

so-called People’s Militia of the Luhansk People’s Republic. The gate’s design, two brick buildings on the sides, one of which has a blue door, completely coincide.

“The territory was equipped for torture chambers. Literally every meter here is steeped in cold, dampness and fear,” says Anton Mikuzhis, the LPR’s People’s Militia Department so-called press officer. But the premises shown in the propaganda stories, in fact, partly served as living quarters for Aidar fighters, and are not parts of some “secret prison”. This can be seen from the similarity of one of the premises from the propaganda stories, with the barracks of the fighters shown in the Ukrainian report. Judging by the fact that now this room has been completely cleared, two conclusions can be drawn: either Aidar fighters intentionally cleared the base during their retreat, or the RT journalists themselves removed everything unrelated from the frame in order to stage the supposedly “concentration camp premises”.

The unlikelihood of any concentration camps existing in the village of Polovinkino is also indicated by the fact that the village is located close to the demarcation zone – it is only 65 km from there to the checkpoint in the town of Shchastya. Following the logic of World War II concentration camp placement, they should be located in hard-to-reach places, away from the front and key transport interchanges. The village of Polovinkino is quite the opposite, it is located on the way to the occupied territories and, in case of a successful offensive by Luhansk People’s Republic Russian gangs, it would have been captured first.

Despite criticisms of Aidar’s activities by international observers from the OSCE Special Monitoring Mission, the UN and Amnesty International, none of their reports mentioned the likelihood of finding a “concentration camp” or a “secret prison” in which people would be killed. All major international claims against the activities of Ukrainian volunteer battalions in Donbas concerned the period of 2014-2015. At that time, up to 37 battalions fought for Ukraine as separate volunteer battalionvs and not as part of Ukraine’s Armed Forces. After the Aidar battalion became part of the Ukrainian Infantry on March 2, 2015, the number of recorded violations decreased significantly and was reduced to individual cases.

The Luhansk People’s Republic militia and the RIA Novosti stories feature several people who allegedly were “prisoners of the Aidar concentration camp”. None of them show any disability or injury that could have been inflicted on them during their time at the alleged camp, they are free and healthy. The video shows dirty basements with no signs of any human presence. Russian propagandist stories claiming to show the viewer an abandoned concentration camp show nothing that actually can be  associated with a concentration. However, the narrator constantly focuses on mutilations, torture and beatings, allegedly were committed by members of the battalion there.

“Prisoners were beaten and tortured, after which many did not survive. Presumably, they were buried next to the prison,” the RIA Novosti video claims. But there are no graves and no specific data on any of the victims. All the  alleged Aidar concentration camp prisoners free and free to comment in front of the camera. A man named “Nikolai” says “Aidar members” stabbed him in the joint of his left arm.” Rather than describe his experience, “concentration camp prisoner” Aleksey talks about “a girl who was dragged out by drunken Aidar members, and, apparently, she was abused.” Another man, also named Aleksey, talks about how “an Aidar member” stole a tractor and a mower from him. According to the Russian media, it would appear these are the things that happen in the concentration camp and secret prisons.

Presented as a forensic expert from the Starobilsk city hospital, Dmitry Romanchuk reads for the video from a sheet of paper the list of “atrocities” committed by “Aidar” within the walls of his “concentration camp”. How these alleged murders were carried out in the “secret concentration camp”, and then documented by the Starobilsk branch of the Luhansk Regional Bureau of Forensic Medical Examination is not clear, nor is it explained in the video. In the footsteps of the videos, the Izvestia newspaper published a document claiming to confirm the large number of deaths that allegedly occurred within the walls of the “Aidar” concentration camp. But this document has little resemblance to a forensic conclusion – it does not contain a description of the cause of death, and the wording format “killed by the Aidar battalion” is not the kind of language normally used in forensic reports.

In another story, a man named Ivan Maslov talks about the time he spent in the “concentration camp”. Maslov says he was forcibly kept in the basement of one of the buildings. He also says that his leg was “perforated, his hands were chafed by the ties until bleeding”, he talks excitedly about how other prisoners were tortured in the torture chamber and “beaten to death”. How he managed to get out of such a “secret prison” remains unclear. He does not provide any photo or video or any other evidence confirming his captivity. Another character in this story, Dmitry, pointss to the basement and says that is where “they beat people with rifle butts.” He says that “he sat in this hole for a month.” His release is also not explained in the story. At the same time, traces of writing “Glory to Ukraine” are visible on a wall, it is unlikely that would have been written by a prisoner.

In another video report, Maria Finoshina of RT states that “many witnesses still prefer to remain silent.” Seemingly that is why the RT film crew was able to elicit a comment from only one local resident, who says that her neighbor “systematically insulted her, and also took away part of her land.”

Such “atrocities” clearly don’t seem to be on the level of a concentration camp. Additional commentary for the story was provided by Anna Soroka, the so-called “Foreign Minister of the LPR”, who is also a Russian propagandist. She talks about “foreign curators” who allegedly trained Aidar fighters. The rest of the story is told by Maria Finoshina herself, where every other word in her running commentary is “Nazis” and “murderers”.