Moscow’s reactions to the staged death of Russian journalist Arkady Babchenko in many ways mirrored their reactions to his “real” death of the day before: the guilty party was Ukraine, there was no evidence of any Russian connection and any claim to the contrary was simply Russophobia and anti-Russian hysteria.  StopFake presents an overview of initial reactions from Russian media to the Babchenko operation.

The Russian Foreign Ministry called the staged killing of opposition journalist Arkady Babchenko “another anti-Russian provocation” that the Ukrainian authorities had resorted to in order to “promote Russophobic lies”. Questions of life and death, the trust of the international community, these are only bargaining chips for the Kyiv regime as it foments anti-Russian hysteria.

The Ministry spokeswoman Maria Zakharova declared that Ukraine had introduced propaganda into history. In a later Facebook post she uncharacteristically admitted that everyone was in shock. “But in vain” she added, “we should be used to the fact that anti-Russian hysteria is the only thing that enables governing under a Ukrainian nationalist dictatorship.”

RT director Margarita Simonyan responded to the news that Babchenko was alive by remembering her Christian soul “This can but make my Christian happy” she tweeted. Then she equated Babchenko’s staged death with the Skripal poisoning in the UK. “Earlier, to create a geopolitical provocation people were actually killed. Sometimes dozens. Now everything is simpler and nicer. Make a Babchenko or a Skripal disappear for a few days and you’re done!”

Meanwhile REN TV put forth a line that would become the leading mantra of the majority of Russian reactions to the Babchenko case: “It turns out everything the Ukrainians said was untrue and everything the Russians said is true. They were not to blame and they were unfairly accused of Babchenko’s murder, even by the Ukrainian Prime Minister.”

Russian politicians reacted by declaring that the Ukrainian sting operation was organized to ‘blacken Russia’s reputation”, the result of which is that no one should now trust Ukraine. The head of the Federation Council Committee on International Affairs Konstantin Kosachev meanwhile announced that as far as he was concerned, the Babchenko operation was “another piece of Ukrainian drivel directed at Russia”.

Akeksey Pushkov, the chairman of Russia’s Federation Council on Information Policy called the staged death “a typical, cynical vaudeville act Kyiv- style that made their western partners look stupid. We knew even before this that Kyiv should not be trusted”.

Meanwhile Russian Duma member Vitaliy Milonov warned Arkady Babchenko not to play with death. “You live in a country where you can be killed in a flash” Milonov said on Komsomolskaya Pravda’s radio show. 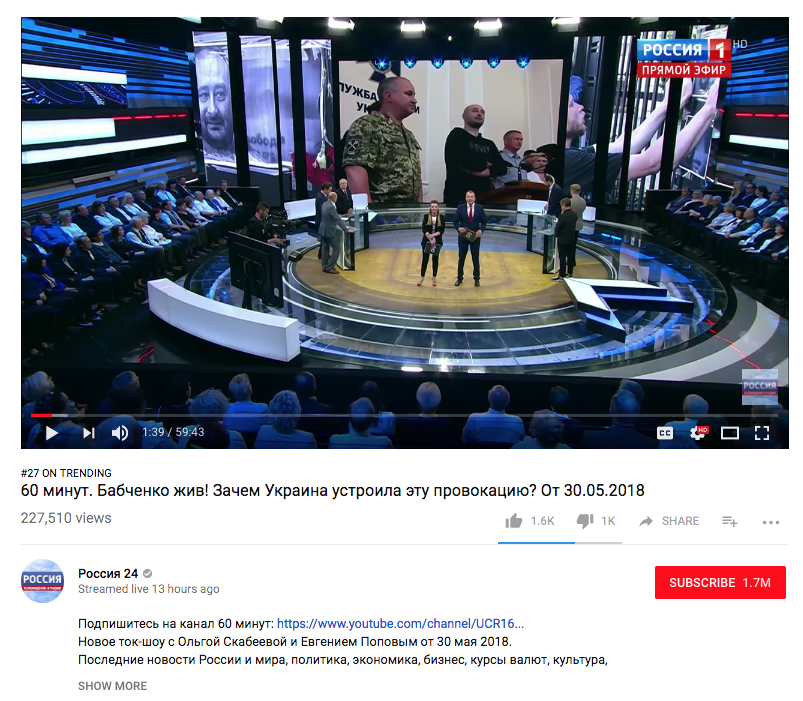 Overall Russian media chose to conveniently ignore the fact that it was Russia’s security services who ordered Babchenko’s murder. In its news program Rossiya 24, one of Russia’s state-owned news channels, pointed out that Ukraine’s security service, the SBU managed to accuse Russia of Babchenko’s murder while he was still alive, surely that must be part of their special operation”. The channel’s daily talk show 60 Minutes was devoted to the Babchenko matter, with presenters calling the operation “idiotic” and referring to Babchenko as a “scandalous journalist”. “There is no evidence of any conspiracy nor any connection to Moscow” one of the announcers declared confidently.

Radio Rossiya’s editor in chief Andrey Medvedev published a blog on RT entitled Fake death in which he wrote the following: “If you believe the SBU version, Babchenko, who despised his country, who so often and with such relish mocked the Russian dead, was to be killed by a Ukrainian war veteran who had fought in the Donbas against Russians who wanted to speak Russian and tie their destinies with Russia”.

Many in Russia compared the Babchenko operation with the recent Skripal poisoning in the UK. “The staging of Russian journalist Babchenko’s death is a dirty and cynical provocation in the style of the Skripal case.The Ukrainian authorities have armed themselves completely with the Russia denigrating techniques of their Western curators” declared Russian Duma Foreign Affairs Committee chairman Leonid Slutskyi in Krasnaya Vesna (Red Spring), the official publication of Russia’s Defense Ministry.

Russian ultranationalist politician Vladimir Zhirinovsky, the leader of the Liberal Democratic Party declared that “Babchenko’s resurrection doesn’t change anything; Ukraine remains the European leader in the number of political assassinations and murders, except that in this case a crime was avoided”.

Why do some Russians believe that the Kremlin is responsible for everything – asked the publication Vzglyad. Arkady Babchenko played a bad joke with himself, there’s no belief that Russia ordered the kill, but as a result, the already negative attitudes towards Babchenko will become even worse. Trust in the SBU will also deteriorate. Vzglyad then mentions other high-profile killings that occurred in Kyiv and disingenuously posits the question “There is not one single serious argument for explaining why Russia would need to kill the journalist Pavel Sheremet or the Russian MP Voronenkov in Kyiv. But Russia is immediately blamed for their murders”.

Vzglyad refuses to countenance any possible Russian guilt, and those who chose to do so are only a small percentage of the Russian population, the publication concludes. According to Vzglyad, today’s Russian government is “as humane as possible” and “political losers accuse the authorities of devilry and cruelty to justify their own defeat”.

Meanwhile official Russia has yet to comment on the Babchenko sting operation. According to presidential spokesman Dimitri Peskov, as of May 30 the Kremlin was not in possession of complete information on the matter.