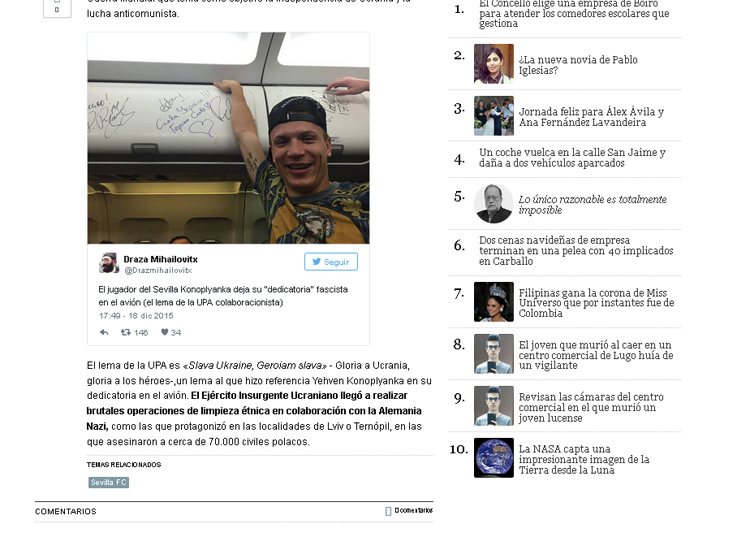 Spanish media accused Ukrainian footballer Yevhen Konoplyanka of fascism on the basis of an unverified tweet.

On December 18, the Spanish newspaper La Voz de Galicia (The Voice of Galicia) informed that Yevhen Konoplyanka, who plays for FC Sevilla, had written  “Glory to Ukraine! Glory to the Heroes!” as a dedication on an airplane. The paper carried a photograph of Konoplyanka posing in front of the dedication with the headline “Fascist Initiation of Sevilla FC Player Konoplianka”.

The story used a photo from a tweet of a certain Draza Mihailovitx who tweeted that the inscription was a Ukrainian Insurgent Army (UPA) “fascist” greeting. Mihailovitx further wrote that “the UPA in cooperation with German troops was guilty of ethnic cleansing during which 70 thousand Poles were murdered in Lviv and Ternopil.” Although the original photograph of Konoplyanka was made in October, the story claiming that he was a fascist was run in Russian and Ukrainian mass media on December 20-22.

Judging by his tweets, Draza Mihailovitx is a Basque of radically left views and an advocate of Putin’s “Novorossia” project. He also uses the name and photograph of a Serb World War II general who organized guerilla bands known as the Chetniks. On December Mihalovitx retweeted a commemoration of Stalin’s birthday 137th anniversary.

After the original La Voz de Galicia story was reposted by numerous websites, the newspaper admitted they had misinterpreted the “Glory to Ukraine! Glory to the Heroes!” greeting and wrote about its historical importance for modern Ukraine and dramatically changed the text of the article.

The headline was changed to “La polémica dedicatoria del jugador del Sevilla Konoplyanka” (“Discussion about Sevilla FC Player Konoplianka”), the text about ethnic cleansing was removed and replaced with the following: “The UPA fought for the independence of Ukraine against Nazi invasion and against communism in the USSR. Nowadays the slogan has lost its historical connotation and is used by Ukrainians who stand against Russian invasion in Ukraine.”