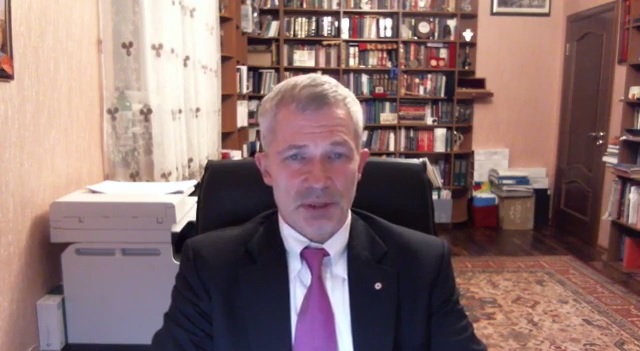 Igor Trunov, the chairman of the Moscow City Department of the Russian Red Cross who made a remarkable statement about  Russian “humanitarian convoys” being an invasion , has refuted his own words. Maybe it is a result from Kremlin’s pressure, as they weren’t too happy with his declarations.

December 30, the official website of this organisation posted a refutation of allegedly “false declarations of Ukrinform”. In his video message, the chairman Igor Trunov claims he has given no interviews for Ukrinform, all he did was exchanging business cards with one of its journalists.

He also states that had said nothing of what was published by Ukrinform website. So, Trunov refuted his words about 10 “humanitarian convoys” invading Eastern Ukraine and about arms delivery to Ukraine via these “humanitarian cargoes”.

All these declarations were made by Trunov on December 25 during the press conference for the news agency “National News Service” in Moscow: “New Year Behind the Frontline: How did Humanitarian Convoy of Moscow Red Cross Deliver Provisions to Luhansk?” and in his comments for one of Ukrinform journalists.

Yet, Trunov has missed a point in his efforts. All his words were saved in audio recordings. They are available on Ukrinform website.

The video with Trunov speaking can be found on ТВі TV-Channel website.