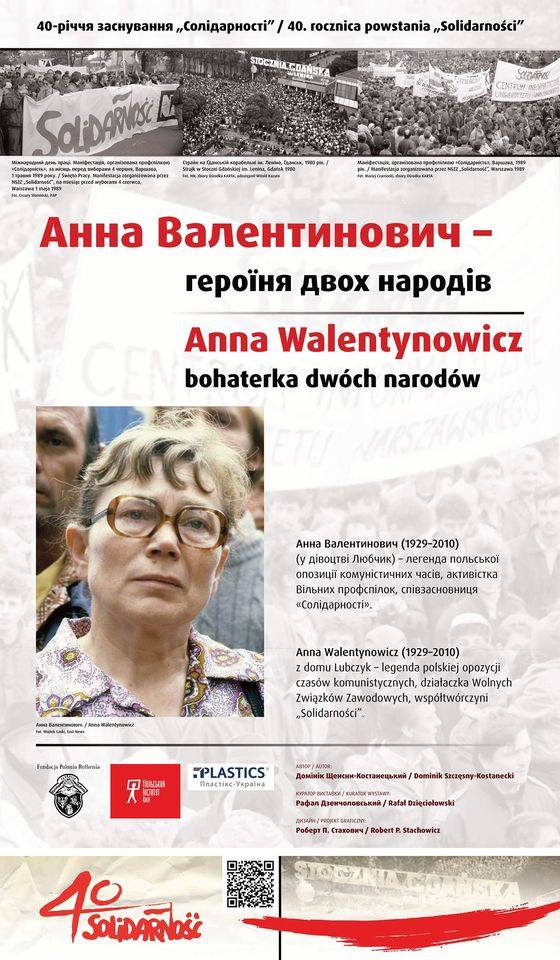 Anna Walentynowicz, the legendary figure of Polish “Solidarity” had Ukrainian roots. Today, she can be not only Polish hero, but also Ukrainian and her memory can bring our nations closer. The exhibition about “Anna Solidarity” is presented in Kyiv thanks to Polish Institute’s initiative.

On 31st August 2020 in Kyiv the exhibition “Anna Walentynowicz – the hero of two nations” was opened. Its main initiator and organiser is Polish Institute in Kyiv and its director Robert Czyżewski. The exhibition has been presented in an especially symbolic place: in the very heart of Kyiv, on Maydan Nezalezhnosti – in the proximity of the Trade Unions Building, known as the main headquarters and the scene of Ukrainian Revolution of Dignity 2013-2014. The Polish Institute underlines, that the exhibition was possible thanks to the cooperation with National Revolution of Dignity Museum and support of Ukrainian Trade Unions Federation. Among the people who participated in the opening were: Polish Ambassador to Ukraine Bartosz Cichocki, director of Polish Institute in Kyiv Robert Czyżewski, director of National Revolution of Dignity Museum Ihor Poshivaylo, vice-president of Ukrainian Trade Unions Federation Yevhen Drapiata and families of those who were killed during the Revolution of Dignity. Vice-president of Polish Sejm Małgorzata Gosiewska holds the honorary patronage over the exhibition. The exhibition was created by “Polonia-Ruthenia” Fundation. Its curator is Rafał Dzięciołowski.

Anna Walentynowicz, the legend of Polish “Solidarity” movement and anti-communist opposition was born in Ukrainian family near Rivne. This piece of her biography was not widely known for a long time, even though after regaining of Polish independence in the ‘90s she was trying to re-establish relations with her family. Ukrainian researchers were first to inform about her Ukrainian roots. In Poland for some time, despite obvious facts, this information was contested. Currently, this subject does not rise any doubts – in fact, it becomes a reason to show the new dimension of “Solidarity” heritage. In Ukraine the fact that one of the fundaments of today’s Polish independence, of freedom movement, of the idea of solidarity is connected to this country arouses positive feedback and feelings. According to the Polish Institute in Kyiv, Polish “Solidarity” and Ukrainian Revolution of Dignity are “united in striving of the society to change and in faith that the civil activity can change the country for the better and this idea is clearly embedded in the history of “Solidarity” and in the life of Anna Walentynowicz”. It is worth reminding that „Anna Solidarity” was recognised by the “Time” as one of a hundred most important women of the 20th century.

According to vice-president of the Polish Sejm Małgorzata Gosiewska, the choice of the place of exhibition next to the Trade Unions Building holds “important axiological, national, social, political and historical message”. Vice-president pointed out to common Polish and Ukrainian independence ambitions and to the new threat for Ukrainian independence – Russian aggression. For Małgorzata Gosiewska, the attitude of Anna Walentynowicz is an example for Ukrainian citizens who want to defend their freedom.

During the opening of the exhibition, the logo of “Solidarity” was shown on the clock display of the Trade Unions Building. The tower with the display is not only an integral part of Kyiv’s architecture, but also of the Revolution of Dignity memory. The building was set on fire in the most critical moment of the Revolution in February 2014, when the Yanukovych’s regime was bloodily dealing with the Maydan. The clock tower over the burning building and barricades was shown all around the world. After the fire, the display was inactive for a long time – today it shows the hour and weather information. Displaying the logo of „Solidarity” on it created an additional symbolical connection between Polish August ’80, Ukrainian Revolution and current times.

The exhibition „Anna Walentynowicz – the hero of two nations” was shown on 1-6 September in the Maydan Museum, Maydan Nezalezhnosti 2, in the street next to the Trade Unions Building. On 9th September – 7th October it can be seen in National Taras Shevchenko Museum, T. Shevchenko blvd. 12.