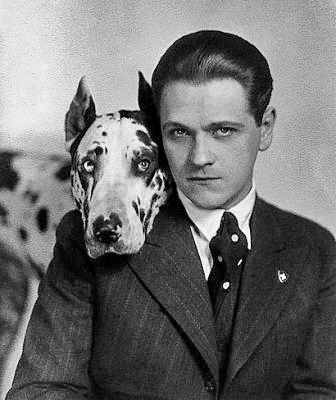 On the 7th October 1943 in a soviet forced labour camp in Kotlas Eugeniusz Bodo, the most popular Polish actor of the Between the Wars died of hunger and fatigue. Communist propaganda for years spread the fake information about him being shot by Germans.

Eugeniusz Bodo (real name Bohdan Eugène Junod) was not only an actor but also director, scriptwriter, film producer and singer. His father was Swiss. He owned the cinema theatres and travelled around the Eastern Europe and Asia with his shows. The actor’s mother was a Polish noblewoman Jadwiga Anna Dorota Dylewska. Bodo was born in Geneva on 28th December 1899.

Already as a child he acted on the stage of his father’s theatre “Urania” in Łódź, then in Lublin, Poznań and finally in Warsaw. His most famous roles he played in musical comedies. He starred in over 30 films. In the last one which was never finished „Warning! Spy!” he played the role of a Polish intelligence officer. The film was taken in the surroundings of Gdynia in 1939. The production was halted because of the war. However, this film had left a tragic mark on the last years of actor’s life who moved to Brzuchowice next to Lviv trying to escape the war. In Lviv he acted in Russian. He also tried to move to the US – he used the Swiss passport in contact with soviet authorities. His Swiss citizenship was probably the reason of his arrest and of the espionage accusation.

He got arrested by the NKVD in October 1942 and was sentenced for 5 years of hard labour camp. He was not covered by amnesty under Sikorski-Mayski agreement because he was treated as a Swiss citizen. Soviet investigators were also interested in Bodo’s role in the “Warning! Spy!” film which could, according to them point to his links with Polish counter-intelligence. All the steps maintained by Polish diplomacy in order to release Bodo from soviet prison were counter-effective. NKVD commissary Fiedorov stated: “The investigation did not confirm the espionage activity of JUNOD-BODO. The suspicions about JUNOD-BODO being part of Polish intelligence have some basis to them, because he was on the lists of missing Polish citizens […] presented by the Poles, while he is a Swiss citizen and the interest of the Poles in his fate cannot be considered a coincidence. Taking into account that JUNOD-BODO is a suspicious person, I would consider purposeful to present his case to the Special Council of the USSR NKVD and to enclose him in the camp for the term up to five years”.

From Moscow, Bodo went finally to the labour camp in Kotlas in Arkhangelsk Oblast. Since the beginning of March 1940, thousands of Poles stayed there. Polish prisoners of war were building the railroad Kotlas-Vorkuta. In the camp Bodo, as inapt for work, was quickly sent to the camp hospital. He died of hanger and exhaustion. He was buried in a mass grave.

For years the communists spread false theories about his death. According to the official version he was supposed to be killed by  Germans. The fictional date of death, pointing to German’s responsibility, for years figured in the PRL period encyclopaedias. Stanisław Janicki, known TV journalist and the host of the programme “In the old cinema” tried to determine Bodo’s fate. He was sent letters with other versions of Bodo’s death, such as killing during the flee from Lviv or death in the prison on Łącki street in Lviv. Televiewers informed also about the death in Siberia.

In the eighties in a letter published in emigrational magazine “Polish Weekly” (“Tygodnik Polski”) Aleksander Feiner, the witness of tragical events in soviet camp, wrote about actual circumstances of Bodo’s death. Feiner gave the date of death and the exact location: camp “Peresilniy Punkt No. 1” in Boltinka near Kotlas. In 1994 Russian Red Cross sent two prison photos of Bodo and the information about his arrest and death.

In 2011 in Kotlas cemetery a monument of the Polish actor was erected. Thousands of victims of Stalin’s repressions lay there – people who lost their lives working to death cutting out forests, building a bridge over Dvina and during the transport to other camps.