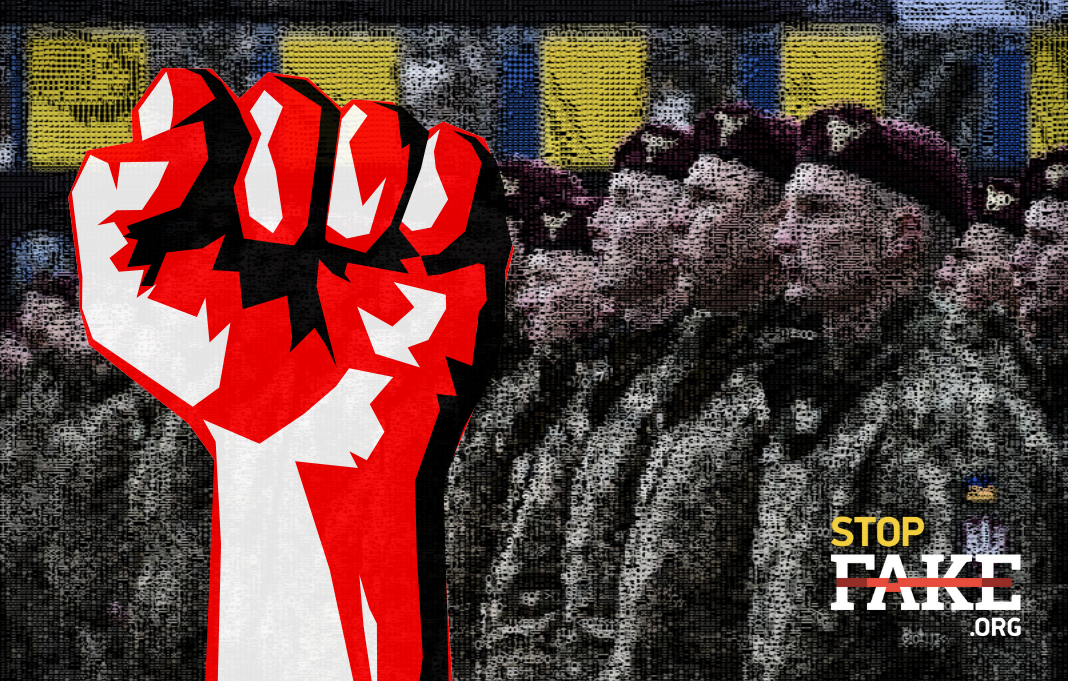 In recent months, the Kremlin has not only been building up its troops on the Ukrainian border, it also has stepped up its information war against Ukraine and its Western partners. In the context of the escalating situation around Ukraine, special attention should be paid to Donbas, where a spark can easily ignite, and become the reason for a larger war against Ukraine.

For the Russian media, the main source of “reliable” and “operational” information about hostilities in the Donbas are reports from the “People’s Militia” of the so-called Donetsk and Luhansk People’s Republics (DPR, LPR). According to our calculations, since the beginning of 2022 the Russian edition of the news site Lenta.ru has featured fake stories based on “intelligence” provided by these people’s militias more than 70 times. A significant number of official Russian statements are also based on “intelligence” provided by these Russian separatist enclaves. In December of last year Russian Defense Minister Sergei Shoigu alleged that aided by American mercenaries, Ukraine’s military were preparing a chemical attack on the occupied territories. He openly admitted that his source was the intelligence service of the Russian occupied Donetsk People’s Republic.

It is no secret that the so-called people’s republics are completely controlled by the Kremlin and publicize any and all information that comes from Moscow and fully corresponds with the Kremlin’s interests and plans.

In order to demonstrate how propagandists create news stories by escalating the situation, we decided to use a recent Russian propaganda fake about restricting military-age citizens from leaving Ukraine.

Using DPR “intelligence” Kremlin propagandists resurrected an old fake about mobilization, claiming that as of February 20 travel from Ukraine will be restricted for all those liable for military service and all military age persons. These measures, according to the fake, will be carried out surreptitiously, various pretexts will be used to deny people the right to leave the country. Furthermore, DPR “intelligence” reports that Ukraine’s Foreign Ministry has asked “diplomatic missions to secretly inform citizens of foreign states to leave the war zone as soon as possible”. All this is supposedly being done in preparation for a Ukrainian offensive against the DPR and LPR. In this context it is worth noting that since October 2021 the Kremlin has been actively pushing the narrative that Ukraine plans to launch an offensive against the “people of Donbas”.

Eduard Basurin of the self-proclaimed DPR people’s police announced that according to his undercover intelligence, on February 2 the director of Ukraine’s State Border Service Serhiy Deyneko issued secret instructions limiting the departure of men aged 18-45 from the country. To avoid panic, the following reasons to explain such limitations are to administrative offenses, non-payment of alimony, and unresolved property issues should be used.  At the same time Ukrainian recruitment offices are reviewing the lists of persons subject to mobilization, Basurin said.

Why are fakes produced by the so-called Donetsk People’s Republic so favored by propagandists?

A single source. For a fact-checker or a journalist, a single source is a problem, but not for a propagandist. Since the war began in Donbas, Russian media have increasingly resorted to using the “authorities” of the self-proclaimed republics to voice the messages and narratives that are beneficial to the Kremlin. Not only traditional Russian propagandists resort to using these sources, but even Russian media that position themselves as independent or liberal, such as the radio station Ekho Moskvy, also resort to disseminating the information meted out by DPR. The Donetsk and Luhansk Russian controlled separatist enclaves are always portrayed as the victim, with Ukraine being the aggressor. If the information they present is refuted and debunked, the propagandists always have an exit, they were simply quoting “unrecognized republics”.

Fakes about the future. Propagandist websites publish information about an upcoming event, information that is difficult or even impossible to verify. When the projected date arrives and nothing happens the propagandists can always claim that they were successful in outing and stopping the plans.

Element of secrecy. Most of the disseminated disinformation citing the DPR and LPR has an element of secrecy. For example, the fake about restricting military age persons from leaving Ukraine was allegedly issued by Ukraine’s State Border Service director behind closed doors along with secret recommendations issued by the Ukrainian Foreign Ministry. Even if these organizations refute the claims (which they did), the propagandists always can accuse them of lying, after all, these decisions were taken in secret.

Responding to StopFake’s inquiry about the alleged restrictions on leaving Ukraine, the Ukrainian State Border Service said no such guidelines were ever issued and the Service’s work and activities are guided solely by Ukrainian laws that regulate border crossing by both Ukrainian citizens and foreigners.

Some Russian media, namely RIA Novosti and Lenta.ru published a rebuttal from the Ukrainian State Border Service regarding the fake. However, they did not update the original publication citing the DPR “intelligence”, the story remains on their websites without any correction. This is yet another favorite propagandist tactic – imitation of journalistic balance and the right to correct a mistake. In fact, what happens is that they repeat the false claim twice. As expected, RIA Novosti’s item about Ukraine’s State Border Service refuting RIA’s original fake gets much less attention – 854 views, than the actual fake, which was viewed 23,076 times. According to the BussSumo content marketing platform, the situation is analogous in social media, the article about restricting military age persons from leaving Ukraine received more than 800 interactions while the refutation received none. It is also worth noting that RIA Novosti’s audience, which regularly consumes false information about Ukraine, is in an ideological echo chamber, it is used to consuming negative content about Ukraine and is probably not inclined to view Kyiv’s position positively. A recent poll conducted by the Russian Levada Center and the Kyiv International Institute of Sociology in November 2021 shows that about 43% of Russians have a negative view of Ukraine.

Russian media’s fake about total mobilization in Ukraine and a closing of the borders is nothing new, it first appeared in 2014. Then Russia 24 disseminated a story about men being pulled off trains and being forced to join the Ukrainian National guard. The fake quickly became a well-known meme.