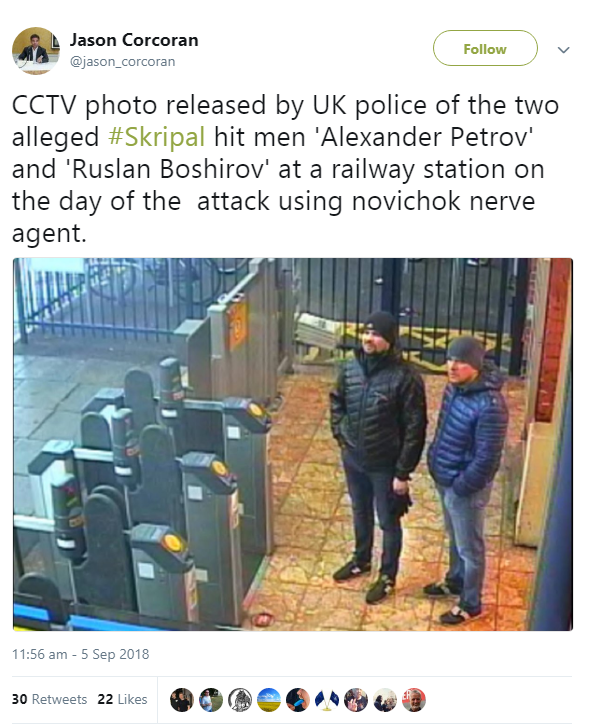 The morning after the OPCW confirmed that Dawn Sturgess and Charlie Rowley had been poisoned by novichok in the aftermath of the attack on Sergei and Yulia Skripal, Britain’s Metropolitan Police issued a bombshell statement with the first details about the two Russian suspects in the case, who went by the pseudonyms Alexander Petrov and Ruslan Boshirov. The Crown Prosecution Service said it has enough evidence to charge the men with attempted murder. The announcement was followed by a statement in parliament by Prime Minister Theresa May accusing Russia’s GRU military intelligence agency of committing the crime, and strong comments from MPs of all parties pointing the finger at Vladimir Putin and condemning Russia’s lies.

“There’s been an elaborate fake news operation run from the Russian embassy,” Salisbury MP John Glen told the BBC on September 4, the day before the suspects were named. “Over the past few months, a web of false information has been spun, seeking to absolve the Russian government and muddy the waters of the investigation. But these attempts have not distracted the police from seeking the truth,” he tweeted the following day.

“This was a sickening and despicable act in which a devastatingly toxic nerve agent, novichok, was used to attack our country,” May said in her statement. “This chemical weapons attack on our soil was part of a wider pattern of Russian behaviour that consistently tries to undermine our security and that of our European allies,” she continued, referring to the annexation of Crimea, shooting down of flight MH17, cybercrime and coup plot in Montenegro. “Back in March Russia sought to sow doubt and uncertainty… and some among us believed them,” May added.

Several Conservative MPs also relished the opportunity to remind Labour Party leader Jeremy Corbyn that he had expressed doubt about the government’s immediate announcement that Russia was responsible for the attack. “It is the nature of the Russian propaganda machine that they will always throw smoke up to confuse us,” said former Home Secretary Amber Rudd, noting that some MPs had fallen for what May called “obfuscations and lies”. Former Foreign Secretary Boris Johnson called for more targeted sanctions and accused Corbyn of failing to show repugnance towards Russia’s actions.

“The revolting regime of Vladimir Putin that has so impoverished and abused the Russian people has many useful idiots and fellow travellers,” said Richard Benyon. Another Conservative, James Cleverly, asked May if she would condemn Kremlin apologists and false flag conspiracy theorists. “I do condemn those who see fit to defend the Russian state when it is clear that they are responsible for this heinous crime,” she replied.

Corbyn himself had no choice other than to accept the police evidence, saying, “The use of military nerve agents on the streets of Britain is an outrage and beyond reckless,” and promising to back any reasonable actions against the Russian state or the GRU. Other Labour MPs had tougher words for the Kremlin. “I do not doubt for a single instant that the bloody trail goes all the way to the Kremlin and to Putin himself personally,” said Chris Bryant, a longtime critic of Putin. “Vladimir Putin only responds to strength, and international, coordinated strength works best,” said Peter Kyle.

After the discussion in parliament Labour MP Stephen Kinnock tweeted, “To all those on the Hard Left of the Labour Party who questioned that the Russian state was behind this attack, please take note. Your conspiracy theory-driven worldview is completely disconnected from reality.” Corbyn’s close ally Chris Williamson, who appeared on RT accusing Theresa May of using the Skripal attack as a distraction from Brexit, made no comment about the naming of the suspects, either in parliament or on Twitter. 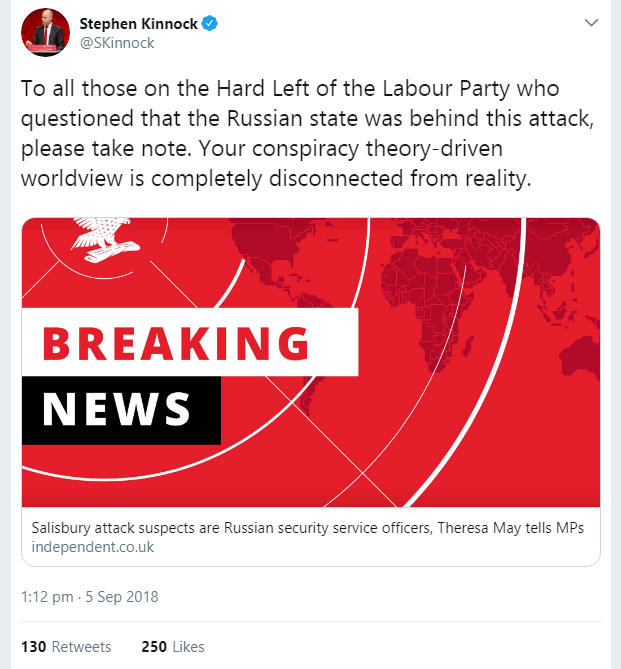 Liberal Democrat leader Vince Cable asked Theresa May in parliament how many oligarchs had had their assets seized under unexplained wealth orders, and MPs from the Scottish National Party asked if more could be done about Scottish Limited Partnerships, a vehicle that has been used to transfer an estimated $80 billion out of Russia, as MP Ian Blackford pointed out.

Russia could find very little to say about the evidence published by the police, which included CCTV images of the suspects at Gatwick and Heathrow airports and in Salisbury, which they also visited the day before the attack, details about the hotel where they stayed in London, and pictures of the fake perfume bottle that was modified to apply novichok to Sergei Skripal’s door handle, and which was found subsequently by Charlie Rowley “in a charity bin”, with lethal consequences. 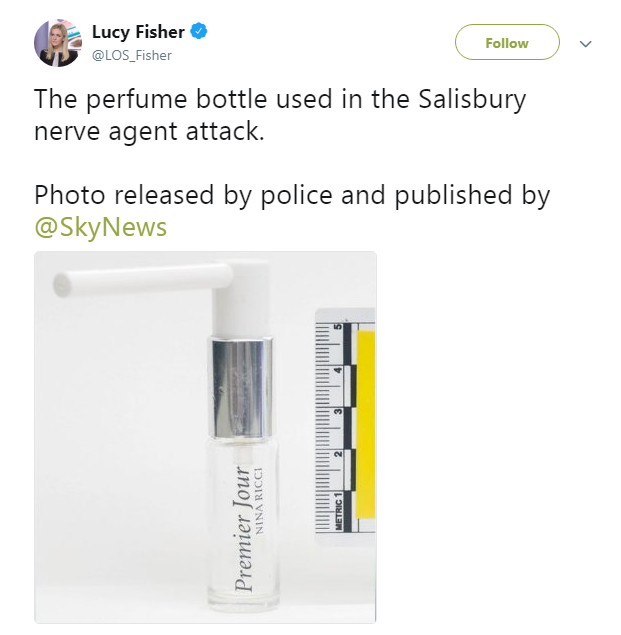 Rowley is currently back in hospital having treatment for meningitis. Russia’s Foreign Ministry anticipated May’s statement by tweeting a video of her dancing during a tour of Africa and a video of their spokeswoman Maria Zakharova dancing, with the comment, “Choose your dance style in international relationship.” 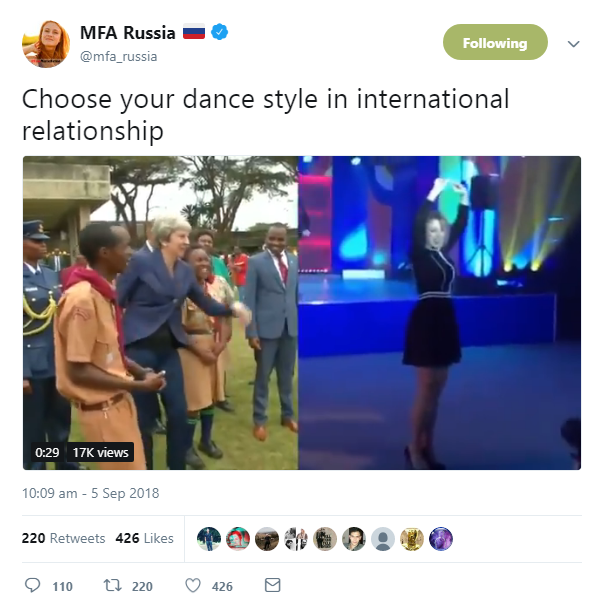 After the police evidence was published, Zakharova responded that the names and photographs of the suspects “mean nothing to us”. “Russia urges London to switch from accusations and information manipulations to cooperation between law-enforcement bodies,” she added. Russia’s representative at the OPCW, Alexander Shulgin said that Russia had nothing to do with what happened in Salisbury, calling it a “provocation”. Constant Putin supporter Craig Murray, a former British ambassador to Uzbekistan, tried to help by tweeting, “To get UK visa, Ruslan Borishov [sic] and Alexander Petrov had to submit high grade clear passport photos against a plain white background. So why has HMG issued deliberately foggy photos with dark areas around eyes and murky background, way below accepted for UK visa standard?” 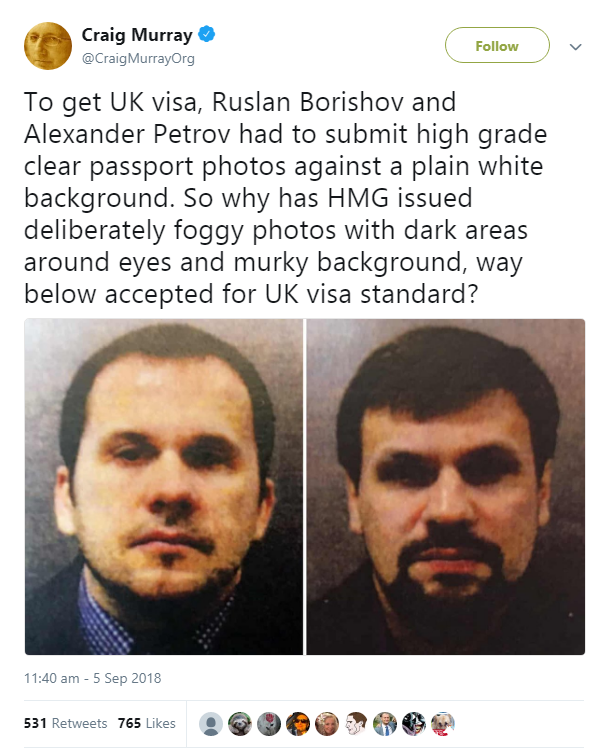 Pro-Russia blogger Graham Phillips also did his best with tweets in both English and Russian, including one in response to journalist and author Luke Harding: “For Luke and all other Guardian-ers, BBC-ers et al, getting all excited, this may indeed be an ‘extraordinary day’. For the rest of us, not so much. Every single part of this looks like an operation orchestrated to blame #Russia, rather than something actually done by Russia.”

Russia and its sworn allies can’t compete with the facts, although they will keep trying, of course. But British people who were instinctively sceptical about the government’s claims in the Skripal case will hopefully start to change their tune now and acknowledge that whether or not they like Theresa May, there is overwhelming evidence that Russia committed this deadly attack and endangered the lives of hundreds of people, as well as harming Salisbury economically and sparking a hugely expensive anti-terror investigation. Russia’s assassination attempt was amateurish and its propaganda efforts are ridiculous. No one should fall for them.