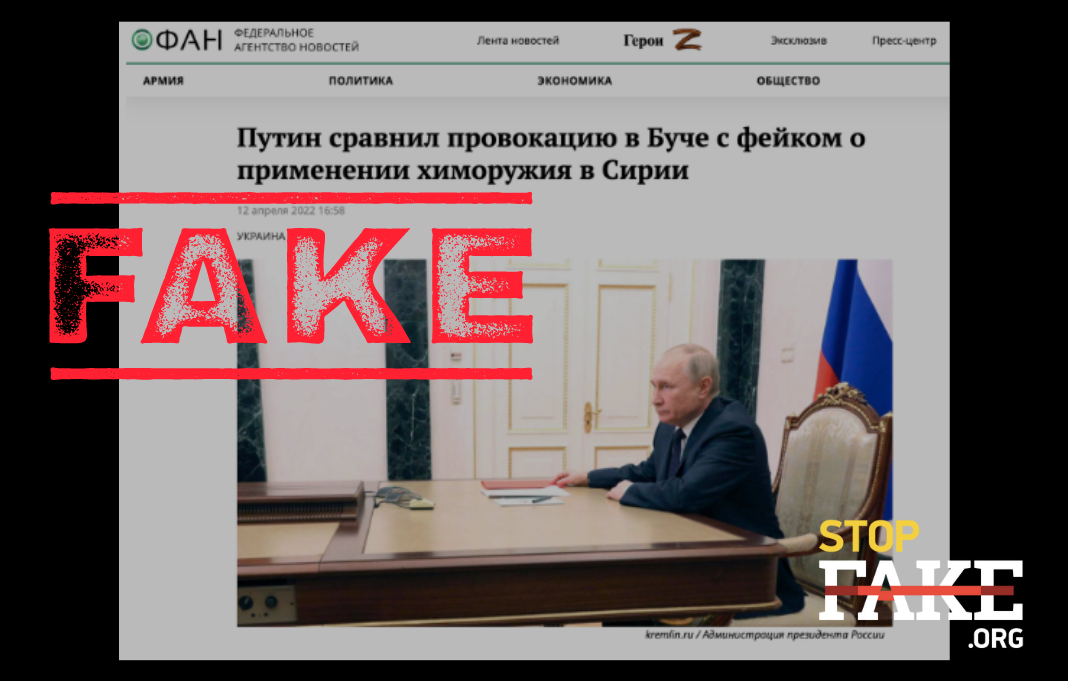 Atrocities committed by the Russian military in Bucha, Kyiv region are confirmed not only by Ukrainian authorities but also by governments of other countries and international organizations. Out of 519 cases of reported chemical weapons use in Syria, 349 have been “credibly confirmed”.

Russian President Vladimir Putin continues to pedal Kremlin propaganda narratives to justify Russia’s invasion of Ukraine. On April 12 Putin said that the massacre of civilians in Bucha “was as fake as the story of alleged chemical weapons used by Syrian President Bashir al-Assad.” Russian media have also been busy pushing claims about the Syrian White Helmets movement, which with the help of videos is helping Ukrainians to save lived during shelling, claiming they are teaching Ukraine to “create fakes against Russia.” (White helmets are a neutral group of volunteer civilians who dig for survivors, evacuate the injured and bury the dead and notify victims’ families.)

Russian military atrocities committed in Bucha, near the Ukrainian capital Kyiv, are not fake, their reality has been confirmed by data collected not only by the Ukrainian authorities, but also by a number of Western countries and international organizations. The European Union, the United States, the United Nations have called Russian crimes in Bucha “terrible, brutal and heartbreaking attacks on civilians” which especially shocked the world community. International Criminal Court investigators are already working in Ukraine.  Read more on this topic in Mass civilian casualties in Kyiv region staged.

Allegations that chemical attacks in Syria were “staged by the West” are also disinformation. The use of chemical weapons by Russian troops and Bashar al-Assad has been well-documented by international investigators. According to the Berlin-based non-profit organization Global Public Policy Institute, as of May 2020 in Syria, out of 519 reported cases of chemical weapons use, 349 attacks were classified as “reliably confirmed”. Based on a body of evidence, German analysts report that the chemical attacks were carried out by Bashar al-Assad’s government forces and their allies. Syria’s main ally is Russia.

The world’s leading experts on chemical weapons have repeatedly refuted Russian claims about the “fake chemical attacks in Syria.” During an air raid in April 2018, chlorine gas bombs were dropped on the Syrian city of Douma. According to various sources, as a result of the use of this chemical agent, more than 70 people died, including women and children, hundreds of people were affected. The Organization for the Prohibition of Chemical Weapons conducted an investigation with the participation of world experts and in the spring of 2019 confirmed in its final report that chlorine had in fact been used in an attack on the Syrian city. Evidence of the attack was presented in a report numbering hundreds of pages, but the Kremlin still stubbornly denies these facts.

The White Helmets have been singled out as a particular source of Russian disinformation. Because of its humanitarian activities, which include documenting Russian war crimes in Syria, the Kremlin has dubbed this humanitarian organization as “fake guns” with terrorist connections. The Kremlin is now accusing the White Helmets of teaching Ukrainians “to make fakes against Russia.” This outrageous claim is not supported by anything even remotely resembling evidence. The White Helmets, who have vast experience in helping civilians during war time, have begun producing “educational guidance materials for paramedics and civilians on dealing with injured people and proper behavior in cases of Russian bombing.” The goals of this humanitarian organization have absolutely nothing to do with “spreading fakes against Russia”.

The work of the White Helmets has never been connected with the spread of disinformation or fakes. The movement began in 2012, when volunteers began organizing in order to rescue people trapped under rubble after bombing raids. White Helmet activists were among the first to document the Assad government’s and their Russian allies’ use of chemical weapons in Syria. Because of this, they have been the target of an extensive and relentless Russian propaganda campaign.