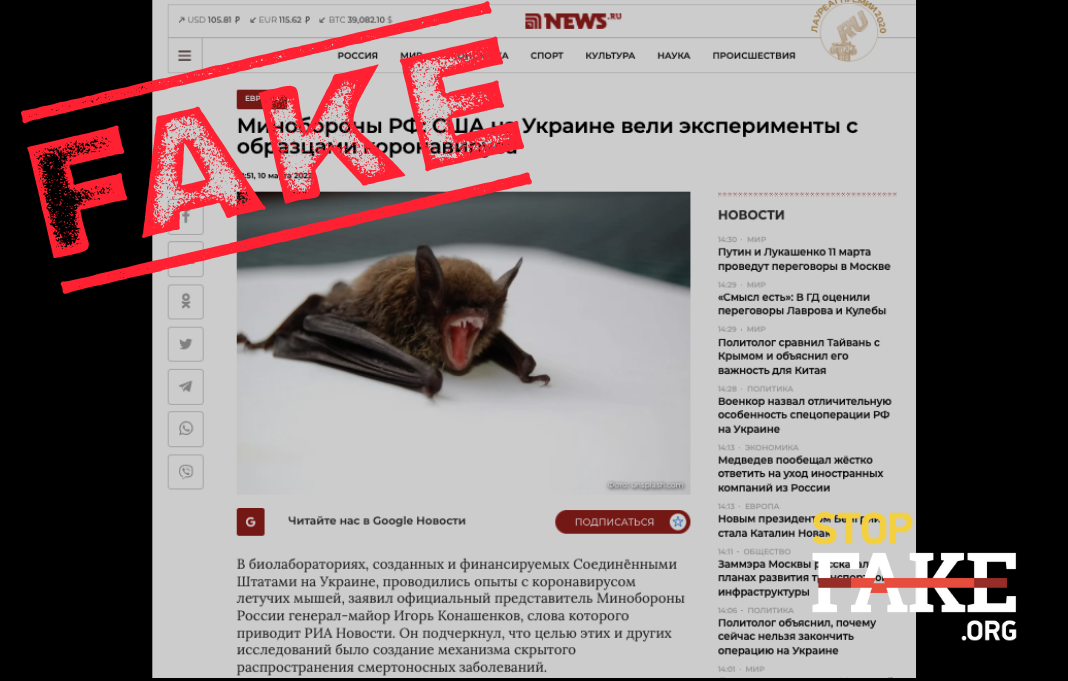 The topic of secret biological laboratories in Ukraine concocting all manner of weapon and scourge are a favorite theme of the Kremlin propaganda machine. In the midst of Moscow’s destructive war against Ukraine, Russia’s Defense Ministry has launched a new variation on that theme, claiming that experiments were conducted on bats with the coronavirus in laboratories created by the US in Ukraine. There are no secret laboratories in Ukraine. All information about the cooperation between the US and Ukraine in preventing the spread of pathogens and the technologies involved in that endeavor are readily available online and in the public domain. The SARS-CoV-2 virus is of natural origin, this has been confirmed by a number of studies.

According to Russian Defense Ministry spokesman Igor Konashenkov, unnamed “documents show that experiments with bat coronavirus samples were conducted in Ukrainian laboratories built and financed by the United States.” The purpose of such research was “to create a mechanism for the covert spread of deadly pathogens, including through birds” Konashenkov said.

The Kremlin propaganda machine periodically circulates fake stories about Ukrainian biolabs supposedly created and financed by the US. Lately this theme has been repeated with greater fervor than usual, in order to explain Russia’s invasion of Ukraine. StopFake regularly debunks such fakes about Ukraine being used as a US biological testing site, or that the US is turning Ukraine into a biological bomb.

Russian media began constructing a connection between the coronavirus and “secret Ukrainian laboratories” some two years ago. In April 2020 the fake began making rounds in the self-proclaimed Donetsk People’s Republic and it was repeated by the pro-Russian parliamentary party Opposition Platform – For Life, particularly by Viktor Medvedchuk, whose daughter’s godfather is none other than Russian President Vladimir Putin. Medvedchuk, who was under house arrest, has fled Ukraine as the war began.

The US Embassy in Ukraine refuted this Russian fake back in 2020, stating then and now, that the US is openly working with the Ukrainian government to consolidate and safeguard pathogens and toxins that could pose security threats, while at the same time providing the opportunity for peaceful research and vaccine development.

“Our joint efforts help to ensure that dangerous pathogens do not fall into the wrong hands.  We’re proud to partner with the Ministry of Health, State Service of Ukraine for Food Safety and Consumer Protection, National Academy of Agrarian Sciences, and the Ministry of Defense to make us all safer,” the US Embassy said in an official statement.

As for the origins of the SARS-CoV-2 virus, which caused the COVID-19 pandemic, recent research indicates that it is of natural origin and was first recorded in the Huannan seafood wholesale market in Wuhan, China. Studies have also shown that the earliest clusters of the virus were concentrated in a specific area of the Huangyan market.

Earlier, StopFake repeatedly debunked a number of fakes about American laboratories in Ukraine, which were disseminated in Russian and Ukrainian media.