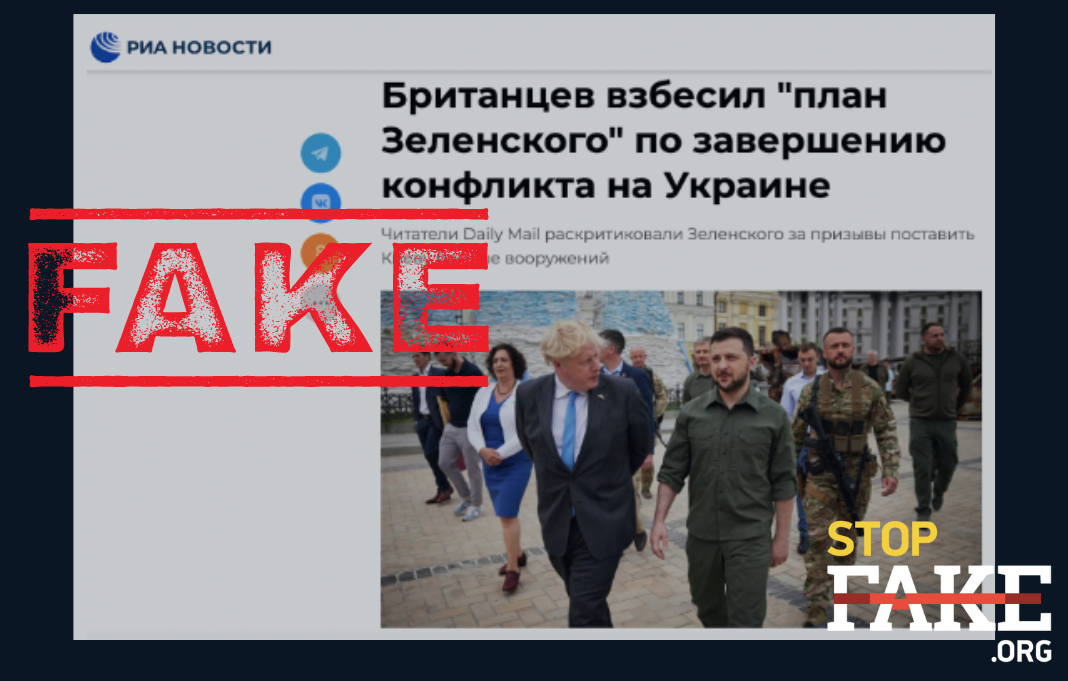 RIA Novosti has taken anonymous comments regarding a British edition Daily Mail story and presented them as the view of all of Britain. Several comments do not make a majority view, much less an official government position. Furthermore, RIA Novosti’s claims completely contradict existing poll data, in which 74% of Britons support sending military aid to Ukraine.

Russia’s state-owned news agency RIA Novosti published a story claiming that the British were infuriated by Ukrainian President Volodymyr Zelensky’s speech to the G7 summit, where he called on partners to send more weapons to Kyiv and increase Russian sanctions. RIA Novosti claims the British were displeased with Zelensky’s appeal and are allegedly advocating the cessation of military assistance to Ukraine.

The RIA Novosti story is not about all British, but only about British Daily Mail readers who decided to comment on the publication’s story about Zelensky’s speech.

RIA Novosti deliberately selected comments that criticized British military assistance to Ukraine and drew its conclusions solely on those few comments. The Daily Mail Story entitled President Zelensky says Ukraine war must end by winter as he calls on G7 leaders to supply anti-aircraft systems and even tougher Russian sanctions has 615 readers’ comments, and only a few of them are critical of Zelensky’s statement. Most of the comments are supportive of Ukraine, however, RIA Novosti propagandists don’t bother mentioning those.

Individual comments under one particular newspaper article certainly cannot represent the opinion of all British citizens on military aid to Ukraine. StopFake has already written about a propaganda tool for creating the illusion of public opinion support, when individual comments, most often anonymous ones, are presented as the position of the majority.

RIA Novosti’s claim that the British allegedly oppose military assistance to Ukraine in the fight against Russian aggression does not correspond with existing polling data.

The YouGov international data and analytics research group, together with the European University Institute, conducted a survey from April 1 to 25 on the attitude of Europeans to the Russian war against Ukraine. According to their data, there is generally high support in Europe for sending humanitarian and military aid to Ukraine and helping refugees. 58% of respondents from 16 European countries, including the UK, are positive about sending weapons and military equipment to support the Ukrainian army. Moreover, 74% of UK respondents support sending military aid to Ukraine. This is one of the highest rates among European countries.

The recent UK in a changing Europe poll shows that more than four months after Russia’s invasion of Ukraine, the majority of Britons still view their government’s response to military aggression in Ukraine positively. The British support both the geopolitical efforts of their government and assistance to Ukrainian refugees.

Previous StopFake stories on Russian propagandist manipulations include: Fake: French demand life sentence for Zelensky, Manipulation: Germans didn’t like Zelensky’s ultimatum to Scholz – they chose Russia, Fake: Americans accuse the US and Ukraine of stealing 40 billion military aid to Kyiv, Are we ready to die for Kyiv? How Twitter is helping the West to sell out Ukraine and The ecosystem of nonsense: How Russian trolls denounce Ukraine and demonize the US. StopFake investigated how Kremlin propaganda uses a network of bots and trolls to discredit the idea of support for Ukraine.