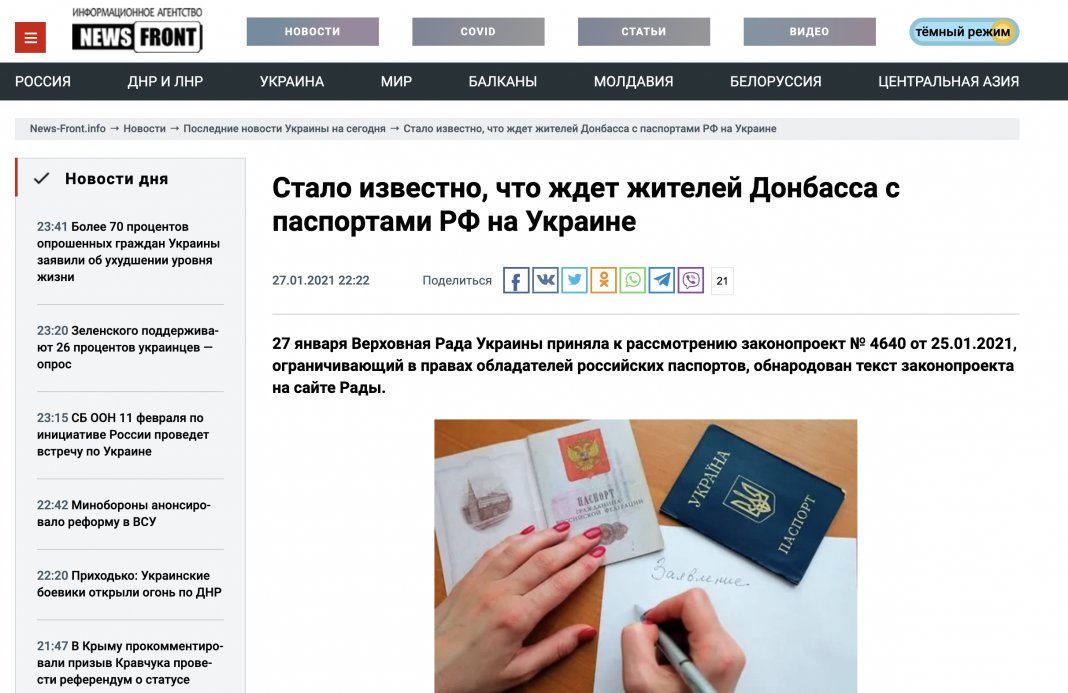 Draft legislation published on the Ukrainian parliamentary web site on January 25 outlines the possibility of dual citizenship for Ukrainians. Russian citizenship is not included in the draft bill. Ukraine does not recognize Russian passports issued by Moscow in occupied Crimea and Donbas. People living in annexed Crimea and eastern Donbas are Ukrainian citizens and that status carries with it rights and guarantees.

Russian media have been circulating fake stories claiming that the Verkhovna Rada, Ukraine’s parliament has adopted a law that will deprive those Ukrainian citizens living in Russian annexed Crimea and occupied eastern Donbas who have Russian citizenship of voting rights.

This fake story was disseminated by NewsFront, Federalnoye Agentsvo Novostey and Antifascist.

The draft law does not mention citizens in Russian occupied Donbas and annexed Crimea directly or specifically.

After Russia annexed Crimea and occupied eastern Donbas, Ukraine passed a number of laws that protect Ukrainians living there. Ukraine, the US and the EU categorically do not recognize any Russian documents issued by Moscow in annexed Crimea. According to Ukrainian law, Crimeans continue to have full suffrage and property rights.

The situation in eastern occupied Donbas is somewhat different. After Russian militants occupied the eastern Luhansk and Donetsk regions, the self-proclaimed Donetsk and Luhansk People’s Republics began issuing “passports” which are not recognized by the vast majority of the world’s countries. In 2019 Russian President Vladimir Putin issued a decree allowing the issue of Russian passports through a simplified process for people who lived in Crimea prior to the 2014 Russian annexation and left the occupied peninsula after the enforcement of Russian rule, and to persons living in the self-proclaimed Donetsk and Luhansk People’s Republics.

These fast-track Russian passports were meant to be issued in Russian cities bordering with Ukrainian occupied territories. Ukraine has declared that Kyiv does not recognize these “fake Russian passports” and Ukraine’s Cabinet of Ministers established a list of Russian agencies issuing those passports. That list is regularly updated.

Ukraine closely monitors the issuing of passports bearing the imperial double headed eagle in the occupied territories and does not recognize them as official documents. And that is precisely why the “Russian citizenship” of Crimeans and Donbas residents cannot serve as a reason for denying Ukrainians voting rights.

The issue of citizenship is a popular theme in the annals of Russian misinformation. StopFake fact checkers have already debunked Russian fakes claiming that Russian passports holders would be rooted out and that dual citizenship would be introduced in Ukraine for western lobbyists.