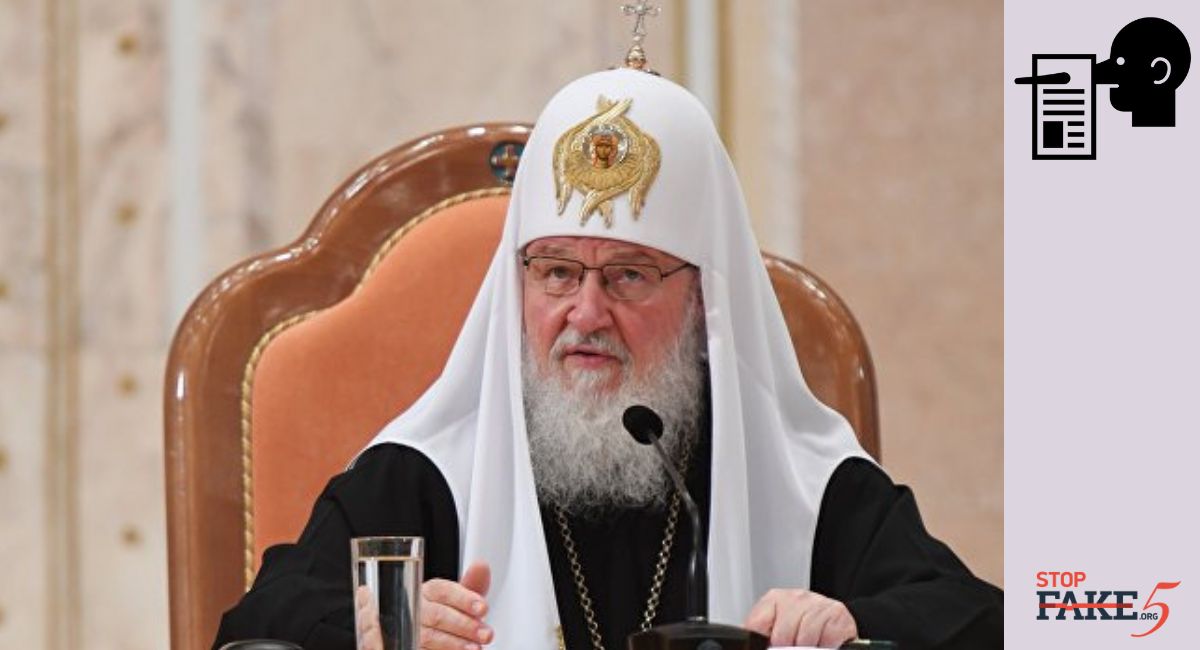 The creation of a “schismatic church” in Ukraine is directly related to the upcoming presidential election and the election campaign of President Petro Poroshenko, declared RT on February 26, claiming that a recent analysis by the European Parliamentary Research Service think tank arrived at exactly such a conclusion. RT claims that EU analysts are convinced that Poroshenko provoked a church schism to create a non-canonical church, the Orthodox Church of Ukraine (OCU) in order to deceive the electorate and get some extra points for his presidential race. 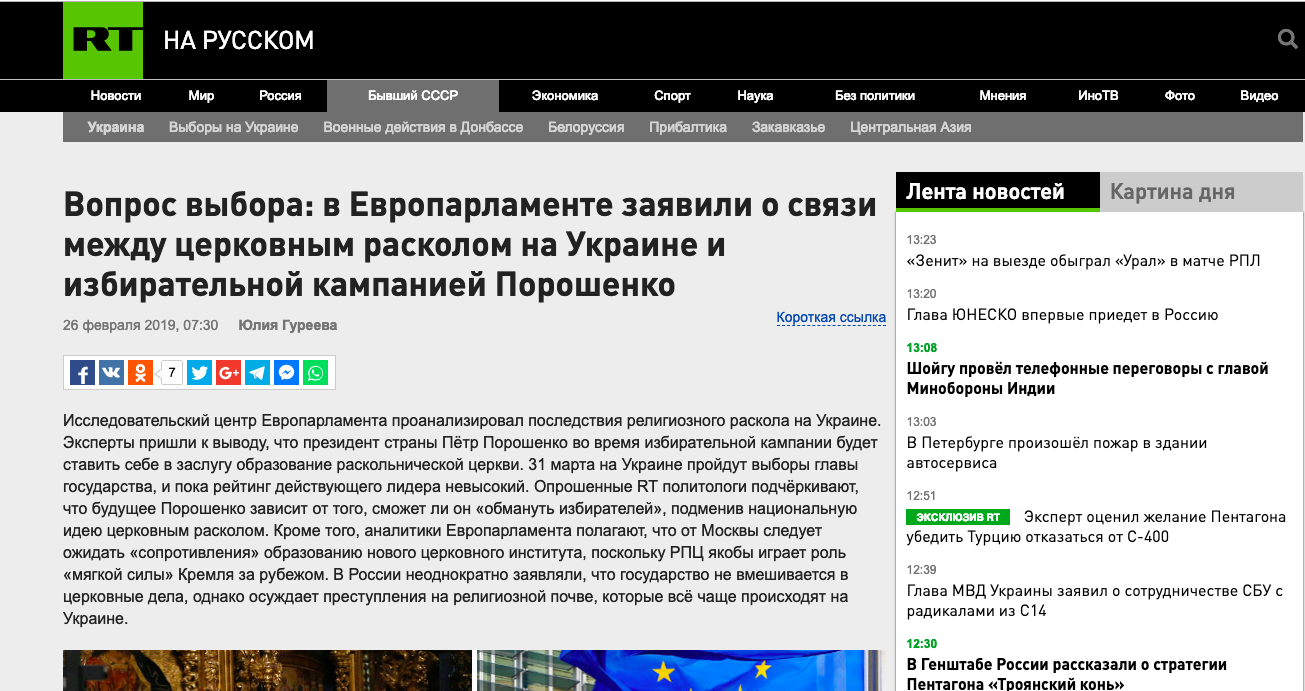 Poroshenko made the church schism the basis of his election campaign and of his political survival. His success depends on how much he can deceive the voters by replacing the country’s national idea with a church schism, RT writes, quoting Russian Academy of Sciences member Roman Lunkin.

A study by the European Parliamentary Research Service entitled Religion and (geo-)politics: Orthodox split weakens Russia’s influence, published on the official parliamentary website on February 18 examines how Ukraine’s Orthodox Church finally achieved independence from the Russian Orthodox Church (ROC). The study stresses that the Kremlin has always controlled church issues and used the ROC abroad as an instrument of soft power to promote its political interests. The study also notes that followers of the ROC in Belarus, Georgia, Moldova and Ukraine are particularly vulnerable to Kremlin disinformation and pressure. 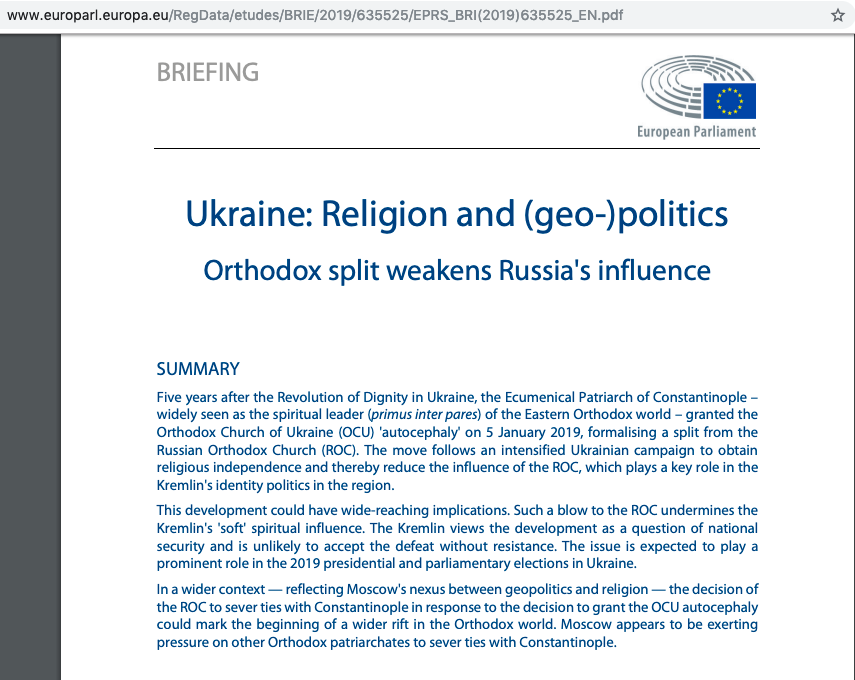 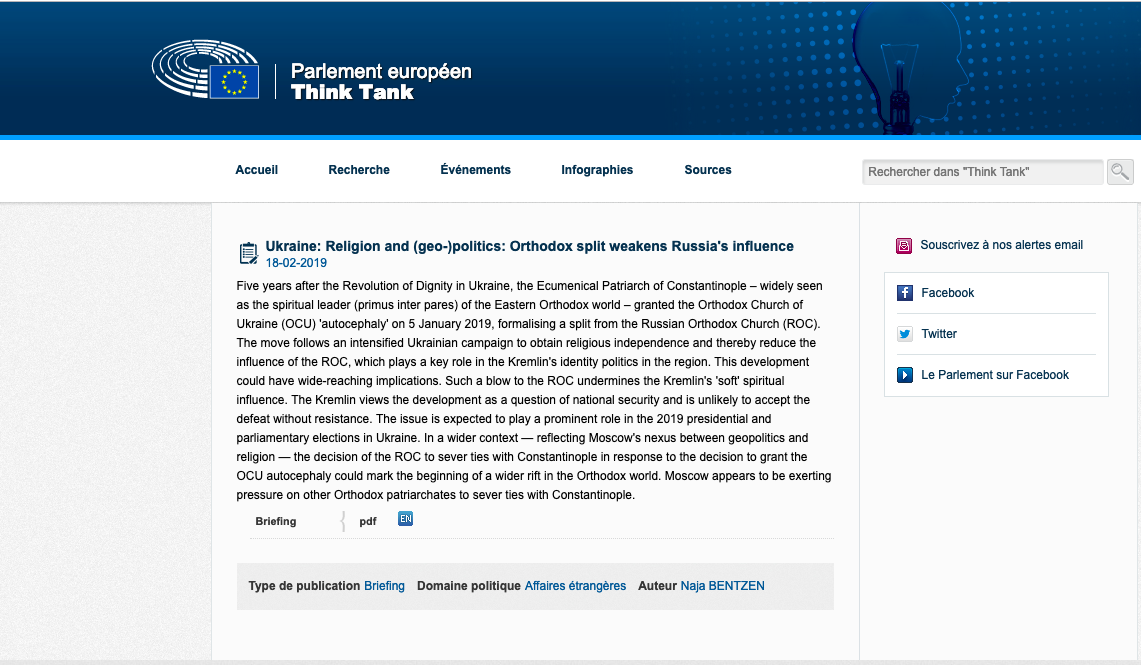 The report points out that Ukraine’s church has been moving towards independence from Russia since 1992, with three presidents – Leonid Kravchuk, Viktor Yushchenko and Petro Poroshenko – actively pursuing  religious independence, or autocephaly. The successful autocephaly campaign could boost President Poroshenko’s chances of reelection, the report notes, but first and foremost, the formation of the new Orthodox Church of Ukraine is significant for Ukraine’s national identity and its nation building process. 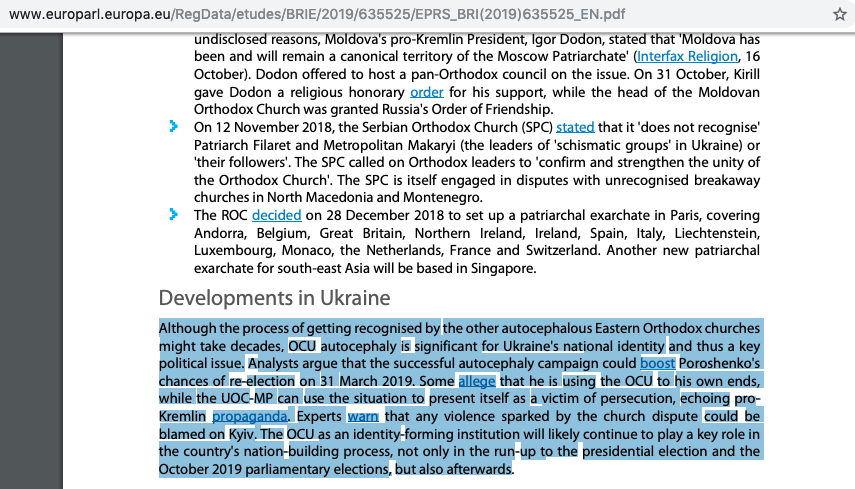 “Although the process of getting recognized by the other autocephalous Eastern Orthodox churches might take decades, OCU autocephaly is significant for Ukraine’s national identity and thus a key political issue….. The OCU as an identity-forming institution will likely continue to play a key role in the country’s nation-building process, not only in the run-up to the presidential election and the October 2019 parliamentary elections, but also afterwards” the report concludes.

The study also notes that the Kremlin is not willing to accept the independence of the Orthodox Church of Ukraine and does not want to lose influence over Ukrainian parishioners. Because of this the ROC may provoke a major split in the Orthodox world and Moscow seems to be putting pressure on other Orthodox patriarchates to sever ties with Constantinople, the study points out.

Since Ukraine’s Orthodox Church received independence, Russia’s propaganda machine has been churning out endless fakes claiming the church is schismatic and non-canonical.