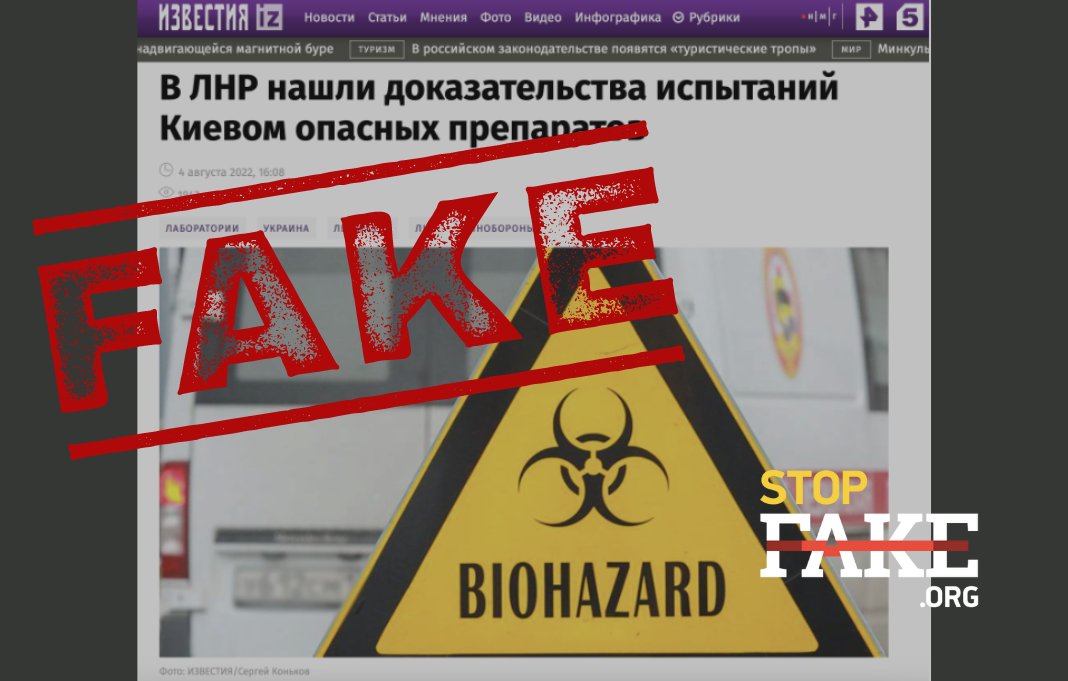 Russian media are interpreting routine clinical trials of high blood pressure and rheumatoid arthritis drugs as an evil experiment on Ukrainian citizens. In these phase II drug effectiveness clinical studies, the trial participants were taking an already well-studied, potentially effective drug to treat their ailments. The clinical trials that Russian media are raising an alarm about are mentioned in published documents and are not a secret – they have passed all stages of verification and were carried out under the supervision of the Ukrainian Health Ministry’s State Expert Center. Information about the drugs and the trials can be found on the Ministry of Health State Expert Center website Information on clinical trials in Ukraine.

On August 4 the Russian Defense Ministry published a fake on its Telegram channel claiming that in the city of Rubizhne, which Russian forces captured recently, (Rubizhne is some 110 kilometers northwest of Luhansk) the Russian military discovered ‘secret documents’ that ‘prove illegal Big Pharma tests of unregistered drugs’ on Donbas residents, as well as show a connection between COVID-19 and ‘Ukrainian biolaboratories’. The allegations were quickly picked up by pro-Kremlin media, starting with Sputnik.

According to Russian media, for several years Ukraine allegedly “tested dangerous drugs with potentially serious side effects” on local residents, all in the interest of big American pharmaceutical companies. As evidence, Russia’s Defense Ministry published several documents allegedly found in the Pharmbiotest medical center laboratory: two clinical trials orders, two addenda to the order with detailed information about the trials, and a list of trial participants.

Pharmbiotest is a Rubizhne based clinical diagnostic research center conducting a wide range of biochemical studies, trials, and diagnostics.

Despite Russian propaganda efforts to pass off these clinical trials as something top secret, they are in fact routine drug test trials that are regularly carried out in almost every country in the world. Moreover, the medicine trials in the documents Russian propagandists have published are not a secret – they’ve gone through all required verification stages and were carried out under the supervision of the Ukrainian Health Ministry’s State Expert Center.

Anyone interested in doing so can verify this by accessing the Information on Clinical Trials in Ukraine site. The site provides the name of the study, where the trials are conducted, the name of the company and country from where the study was commissioned, the list of drugs being tried, their description and dosage. Many of the trial documentation papers can be found in the public domain on government websites, once again proving that these trials were not at all secret.

According to the information on clinicaltrials.dec.gov.ua site, the Pharmbiotest Clinical Diagnostic Center conducted two studies – in September 2020 and June 2021 – on the bioequivalence of two drugs, Ukrainian-made Tenzocard and French-made Arifam. This information corresponds to the information contained in one of the documents published by the Russian Defense Ministry.

A bioequivalence study is conducted to compare if drugs with identical active ingredients or two different dosage forms of the same drug possess similar bioavailability and produce the same effect at the site of physiological activity.

Pharmbiotest was studying the effectiveness of two drugs with the same composition, Tenzocard and Arifem. Arifem is a French made drug used to treat high blood pressure and hypertension and has long been sold in both Ukraine and Russia.  Therefore, Russian Defense Ministry claims that Pharmbiotest was testing dangerous drugs is nothing but a bald-faced lie.

The other drug in the study, Tensocard, is manufactured by the Ukrainian pharmaceutical company Mikrokhim. Peviously targeted by Kremlin propagandists, Mikrokhim issued an official statement in July in response to Russian accusations that the company’s Rubizhne plant was a “biological laboratory” producing banned substances. Mikrokhim is an innovative pharmaceutical company with 30 years of experience on the pharmaceutical market, the company statement said. “The company’s product portfolio is represented by four therapeutic groups: cardiology, neurology, gastroenterology, and traumatology. Our drugs and production meet all international certification standards,” the statement also said.

One of the documents Russia’s Defense Ministry published refers to clinical trials of drug GDC-0853. These trials were also not secret.  According to the clinicaltrials.dec.gov.ua website, GDC-0853 studies were conducted in Ukraine in October 2016 and February 2017. This drug is used to treat rheumatoid arthritis and systemic lupus erythematosus. Similar clinical trials were carried out in the United States.

The GDC-0853 study was a phase II trial, with a larger group of people with the disease the drug is meant to treat. This means that the drug had successfully passed phase I trials, which evaluate the safety of the drug.

The Russian Defense Ministry also published several “documents” they claim prove the connection between Ukrainian “biological laboratories” and COVID-19. The “documents” include the USAID Predict  Information Brochure, as well as the Predict COVID summary on the program’s activities during the pandemic. Both documents are easily found on the Internet.

Predict was an epidemiological research program funded by the United States Agency for International Development. Launched in 2009 the project was an early warning pandemic system intended to strengthen global capacity to detect viruses with pandemic potential that can cross from animals to humans. Predict partners conduct research in geographic “hotspots” and focus on wildlife that are most likely to carry diseases – animals such as bats, rodents, and nonhuman primates. Since April 2020 Predict collaborates with several partners, among them the University of California at Davis School of Veterinary Medicine.

The Predict project is not active in Ukraine. USAID, however, has been working in Ukraine since 1992, with programs focusing on combating HIV and tuberculosis, as well as introducing routine vaccinations. The presence of USAID brochures in no way confirms the Russian Defense Ministry conspiracy theory about the connection of “biological laboratories” on the territory of Ukraine with the development of a new coronavirus. Previously, StopFake debunked such disinformation in detail in the article Fake: Bat coronavirus experiments conducted in Ukrainian biolabs.

The Russian Defense Ministry also once again accused the United States of conducting secret tests on Ukrainian territory on the most “vulnerable categories of citizens” – patients in psychiatric hospitals. In the article Fake: American scientists “secretly tested” dangerous drugs on patients in Kharkiv psychiatric hospital, StopFake debunked these disinformation claims.

Russia’s war in Ukraine has placed many ongoing clinical trials as well as the manufacturing and supply of medicines and raw materials in Ukraine in severe jeopardy.